TO ALL THE BOYS I’VE LOVED BEFORE 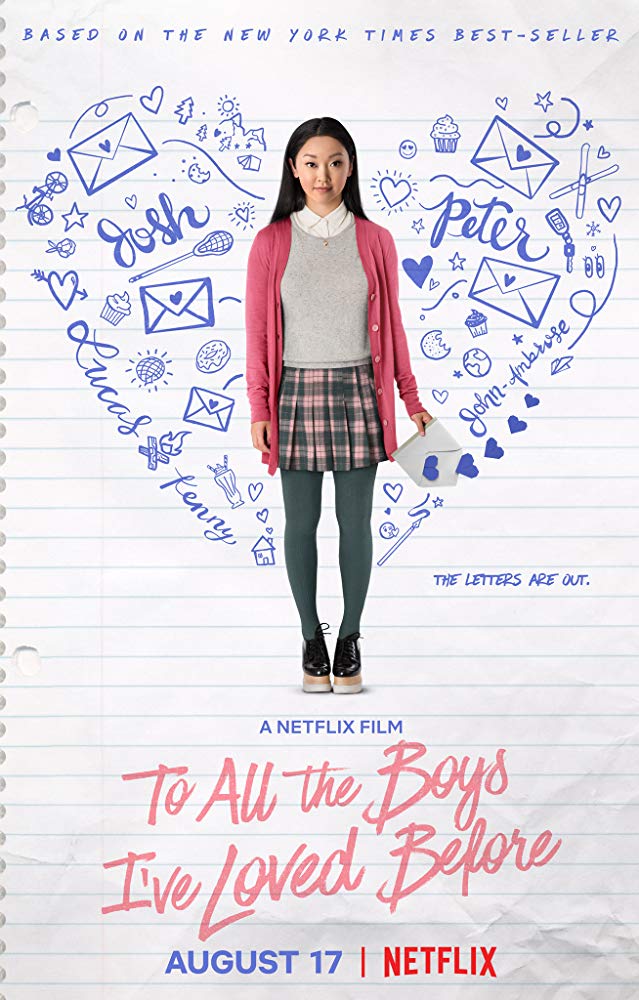 TO ALL THE BOYS I’VE LOVED BEFORE is a romantic comedy about a teenage girl named Lara Jean, who finds out her younger sister has accidentally mailed her secret childhood love notes to five boys that were addressed but never sent. Peter, one of the boys, derives a plan to use the letter to his advantage. He negotiates with Lara Jean the terms of a fake relationship to make his ex-girlfriend, Gen, jealous. All goes well until Peter and Lara Jean start to really fall for one another, which makes things more complicated.

TO ALL THE BOYS I’VE LOVED BEFORE is fun and heartwarming, with appealing characters. It contains some moral elements showing a strong family unit, with good guidance from the lead character’s father. However, it’s marred by objectionable content. For example, the characters are also guided by their emotions. There’s a significant, unnecessary amount of foul language. Finally, there’s underage drinking at a party, and one boy says he’s homosexual. Because of this content, MOVIEGUIDE® advises strong caution for TO ALL THE BOYS I’VE LOVED BEFORE.

(Pa, Ro, B, PC, Ho, Fe, LL, V, S, N, AA, MM):
Dominant Worldview and Other Worldview Content/Elements:
Light mixed pagan worldview with Romantic and moral elements about a teenage girl dealing with five secret childhood love letters that were mailed accidentally, girl navigates the dating world for the first time and fake dates a boy to make his ex-girlfriend jealous, but he unintentionally falls for the girl, a strong family unit is extolled with a strong father figure who lost his wife and is raising his family, friendship and sticking up for friends, and people you love are extolled, plus some politically correct elements including homosexual content where a boy talks about how he is “gay”, and feminist content as a young girl wears a necklace with the word “Feminist” on it
Foul Language:
13 obscenities and 10 light profanities (mostly OMG)
Violence:
Light comic violence when girl gets hit in the face with a pillow, there’s a playful pillow fight, girl goes out her window and accidently falls off the roof but isn’t hurt, one person almost hits another person with their car, sisters chase each other around a room in a fight, but no one is hurt, and the fight isn’t very serious
Sex:
Couple makes out while girl sits on the guy’s lap, but nothing further is implied or depicted, boy has his hand in girl’s back pocket, a group of middle schoolers play spin the bottle, and boy kisses girl on the mouth, six instances of kissing (some couples were dating, but some not)
Nudity:
Upper male nudity when boy is in hot tub
Alcohol Use:
Father drinks casually at dinner twice, and underage teenage drinking at a party
Smoking and/or Drug Use and Abuse:
No smoking or drugs; and,
Miscellaneous Immorality:
Jealousy, lying, rudeness, name calling, main character and her homosexual friend are seen in the same hotel room, but it is unclear if they actually sleep there, and a character takes a video of a couple making out and sends it to people and calling the video a sex tape even though it really isn’t.

TO ALL THE BOYS I’VE LOVED BEFORE is a romantic comedy about a teenage girl who finds out her younger sister mailed her secret childhood love notes to five boys that were addressed but never sent.

The movie opens with Lara Jean in a daydream of a book she’s reading. The boy she sees in the dream, Josh, was one of her childhood crushes who’s now dating her older sister.

Cut to Lara Jean and her two sisters, Margot and Kitty, getting ready to have their last family dinner with their dad as Margot is leaving for college in Scotland the following day. Josh joins the dinner, where, at the end, Margot dumps him because she’s moving to another country and he’s still in high school.

Josh used to be Lara Jean’s best friend, but things got complicated when he started dating Margot. The audience sees flashbacks of Lara Jean, Josh, and Margot hanging out together, and Lara Jean recalls how awkward it was.

This is when Lara Jean explains writing love letters. When she was younger, she wrote five love letters that were addressed but never sent. It was a way for her to express emotion without telling the boys she liked how she felt. One night, when Lara Jean and Kitty are hanging out watching a movie, Kitty sneaks up to Lara Jean’s room when she falls asleep and sends out the letters to the boys, thinking it will help her older sister’s social life.

The next day at school, one of Lara Jeans letter recipients, Peter Kavinsky, confronts her about the letter. He was flattered and said even though he and his girlfriend, Gen, just broke up, they would never date. Lara Jean literally faints, and when she revives, Margot’s ex-boyfriend Josh is walking towards her with his letter. Not knowing what to do, she kisses Peter before running away to avoid Josh. Peter doesn’t let this groundbreaking news go, though, and seeks Lara Jean out to propose to her they fake date to make Gen jealous, so that will want to get back together with Peter.

Lara Jean accepts Peter’s proposal, and they come up with a set of rules they would follow. The pair starts spending more and more time together and end up connecting with one another because they both lost a parent. Lara Jean’s mother died, while Peter’s father left his family to create a new one. As they learn more about one another, the audience sees Lara Jean and Peter begin to develop real feelings for one another.

Months pass during this fake relationship, and the high school ski trip is upon them. It was agreed that, if Peter and Lara Jean, were still together by the time the trip came, Lara Jean would go with Peter. By this time, the trip is either a make or break for Peter and Lara Jean’s fake relationship. Will they each confess they had real feelings for the other, or will Peter get back together with Gen?

TO ALL THE BOYS I’VE LOVED BEFORE is a heartwarming, fun and lovable teenage romantic comedy that makes viewers identify with Lara Jean and Peter. The movie explores relatable topics, and viewers can empathize with Lara Jean as she experiences falling for the high school jock.

That said, the situation the teenage characters put themselves into during the movie isn’t a good example that young people should follow. The movie does contain, however, some moral elements showing a strong family unit, with good guidance from the lead character’s father. The movie also extols friendship and being loyal to one’s friends and the people you love. Sadly, though, these positive elements are marred by objectionable content. For example, the characters are guided by their emotions. There’s also a significant, unnecessary amount of foul language. Finally, there’s underage drinking at a party, and one boy says he’s homosexual. Because of this content, MOVIEGUIDE® advises strong caution for TO ALL THE BOYS I’VE LOVED BEFORE.

Watch TO ALL THE BOYS I’VE LOVED BEFORE: