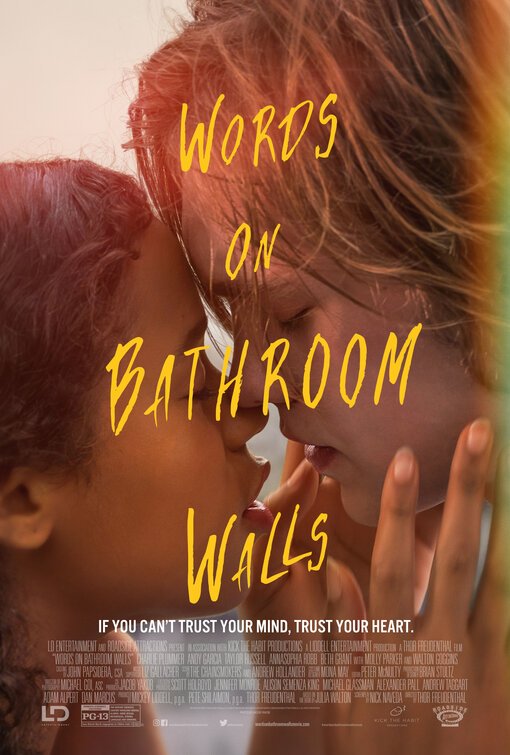 WORDS ON BATHROOM WALLS is an absorbing drama about a high school senior suffering from schizophrenia. Young Adam starts hearing voices and seeing people who aren’t there and is diagnosed as schizophrenic. His father abandons the family, leaving Adam and his mother alone. Cooking is the only thing that seems to silence the voices and visions. Adam is expelled from his high school after he suffers a breakdown. Adam gets a chance to fulfill his desire to go to culinary school with a new medication and a new opportunity to finish his secondary education at a Catholic school. The school’s female valedictorian helps Adam, as does the school’s priest.

Extremely well-acted, WORDS ON BATHROOM WALLS takes viewers on a vivid, poignant emotional journey of hope, pain, fear, and love. It has a positive portrayal of an understanding Catholic priest who helps Adam in several scenes. However, the movie contains some foul language, brief crude dialogue, brief political correctness, and scary delusions. WORDS ON BATHROOM WALLS is a compassionate treatment of schizophrenia, with a great ending, but MOVIEGUIDE® advises strong or extreme caution.

(BB, CC, H, Ab, Ro, PC, Fe, FR, LL, VV, S, N, DD, M):
Dominant Worldview and Other Worldview Content/Elements:
Strong moral worldview extols hope, compassion, love, honesty, and parental love, with a positive portrayal of a Catholic priest who tries to minister to a teenage boy, the priest is shown helping but the boy twice tells the priest he still doesn’t believe in God and doesn’t seem to change that opinion in the end so some humanist and anti-Christian elements remain in the movie, plus a Romantic, politically correct, feminist element when teenage girl says she doesn’t support the “patriarchy,” and an imaginary character makes a couple New Age comments that sound a little Buddhist, but her attitude provides some comic relief
Foul Language:
16 obscenities (including one or two “f” words) and four exclamatory OMG profanities
Violence:
Some scary delusions and other violence includes schizophrenic teenage boy imagines deep voice associated with silky black smoke, imaginary men with bats willing to defend him, boy imagines chemistry beakers levitating and breaking, boy accidentally hits a beaker with aide, and the acid spills onto another boy’s bare arm, character falls from a catwalk and ends up in the hospital, boy pushes a Catholic nun out of the way, and she falls onto the floor, teenage girl suddenly punches teenage bully, and he falls down, imaginary characters wielding bats smash kitchen objects
Sex:
Two or three crude sexual jokes and a few teenage kisses
Nudity:
A fantasy character wears his shirt open, exposing his bare chest
Alcohol Use:
No alcohol use
Smoking and/or Drug Use and Abuse:
No smoking but an imaginary teenage girl holds a giant marijuana cigarette in a school hallway in one scene and waves the smoke around, and boy suffering from schizophrenia takes a new medication to stop his delusions but later secretly throws the pills away each morning because the medication is causing him to have tremors and to lose his sense of taste and smell; and,
Miscellaneous Immorality:
Teenage boy resents his stepfather and angrily attacks him in a couple scenes or tells his mother he doesn’t trust the man, but it’s later revealed the boy is suffering from a misunderstanding, boy hides a secret from his new girlfriend, boy disobeys orders to stay home.

WORDS ON BATHROOM WALLS is an absorbing personal drama about a high school senior suffering from schizophrenia who gets a final chance to fulfill his desire to go to culinary school with a new medication and a new opportunity to finish his secondary education at a Catholic school. Extremely well-acted, WORDS ON BATHROOM WALLS takes viewers on a vivid, poignant emotional journey of hope, pain, fear, and love, with a positive portrayal of an understanding Catholic priest, but there’s some foul language, brief crude dialogue, brief political correctness, and scary delusions that warrant strong caution.

The story is narrated by the teenage boy, Adam, as if the camera is Adam’s therapist. It opens with Adam telling his therapist about the onset of his schizophrenia. His disease started with minor delusions, followed by voices. The voices turned into four characters. The first three were a teenage girl named Rebecca spouting hippie platitudes, a slovenly teenage boy named Joachm obsessed about girls and a rough cigar chomping man armed with a baseball bat who defends Adam. The fourth character is a dark, malevolent voice that tries to fill Adam with self-doubt and hate.

One day, Adam’s father just leaves the family. His mother tries to help Adam by exploring various kinds of medications for her son. None of them seem to work, however. Meanwhile, Adam has found that the only way to shut out the voices is by focusing on cooking meals for himself and his mom. Cooking becomes a passion for Adam, so he gets accepted to a culinary school after he graduates from high school. Meanwhile, Adam’s mother finds a boyfriend, who decides to live with them. Adam doesn’t trust him, however. He thinks the man wants to have him committed.

One day a school, the voices and delusions in Adam’s head get really bad. Adam imagines all the beakers and instruments in his chemistry lab starting to levitate. He accidentally knocks a beaker of acid on one boy’s arm, and Adam’s imaginary bodyguard appears with two other gang members armed with bats. Adam starts yelling, and the school’s security guard has to restrain him.

Adam’s psychotic episode gets him expelled from school. However, his mother finds a promising new medication for Adam offered by a new therapist. She also finds a Catholic school that agrees to take Adam in if he promises to keep taking the medication.

Adam starts taking the medication, which seems to work well for him. However, he needs to improve his grades, so he makes friends with the school’s beautiful valedictorian, a black Hispanic girl named Maya. He convinces his mom and Maya to pay Maya to help tutor him three nights a week. Adam and Maya find it easy to talk to each other, but Adam hides from Maya his mental illness. In the confessional booth, Adam also finds a welcoming ear from the Catholic school’s priest, though Adam warns the priest that he doesn’t really believe in God. The priest asks God to watch over Adam anyway. As a result of the new medication, Maya and the priest, Adam’s grades start to really improve.

Sadly, the new medication starts to cause tremors in Adam’s right hand and deprive him of his taste and smell. Fearful that this will take away his only joy in life, cooking, and crush his chance to attend culinary school, Adam decides to stop taking his medication and hide this from his mom. It’s only a matter of time, therefore, when Adam’s illness will raise its ugly head and destroy everything Adam and his mother have been working toward, wrecking his future.

The title WORDS ON BATHROOM WALLS refers to the hateful gossip about other students and teachers that sometimes can be found on school bathroom walls. Adam is afraid that, once Maya finds out about his schizophrenia, she will think much less of him and accept the mean words that the schoolchildren will write about him.

WORDS ON BATHROOM WALLS is extremely well acted. Charlie Plummer does a brilliant job depicting the hopes, fears, pain, doubt, desires, and madness of a young man dealing with schizophrenia. As his love interest, Taylor Russell turns in a very appealing performance. Charlie receives great incredible support from a talented veteran cast, including Andy Garcia as the priest, Molly Parker as the mother and Walton Goggins as the stepfather. The cast and crew deliver a vivid, poignant emotional journey of hope, pain, fear, and love.

The movie has a strong moral worldview that extols hope, compassion, love, honesty, and parental love. It also has a positive portrayal of a Catholic priest who tries to minister to Adam. He actually helps Adam two or three times in the movie, even though Adam tells the priest he doesn’t believe in God. Despite the movie’s positive ending, Adam doesn’t seem to change that opinion in the end, so some humanist and anti-Christian elements remain in the movie.

WORDS ON BATHROOM WALLS also has some foul language, including one or two “f” words. There are also a couple lewd references, brief political correctness and scary delusions that warrant strong caution.

That said, the movie is a compassionate treatment of the problem of schizophrenia, a mental illness that often hits teenagers who are Adam’s age, or young adults in their twenties. Some may complain that the movie’s treatment of this problem is a little too slick, but a more gritty portrayal of the problem probably wouldn’t get the kind of broad audience toward which this movie is clearly aiming. The ending to WORDS ON BATHROOM WALLS is really good.

According Christian sources, discussing spiritual matters and biblical faith with schizophrenic patients can help them separate reality from fantasy. Loving support from family, friends and church is also vitally important. In addition, helping patients deal with substance abuse problems that often accompany this mental illness is invaluable. Offering to take patients to job and therapy appointments and reminding them to take their medication helps keep them on track.