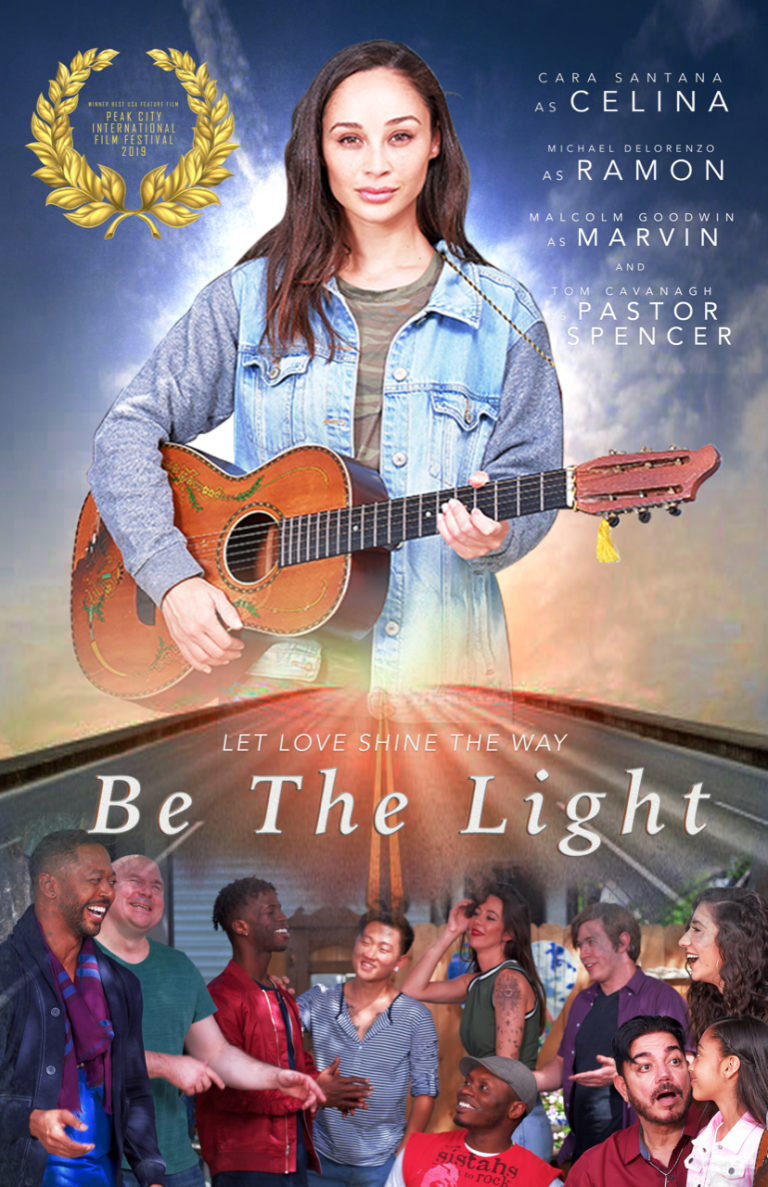 BE THE LIGHT follows a woman named Celina who tries to make amends with her dying father, Ramon. Celina and her friends work together to create a community center and church to help the people in their community, starting with Ramon. This results in a group of misfits using music to bring others together while trying to move from their corrupt pasts. Will other people in the community forgive and help these adults create a new legacy for themselves?

BE THE LIGHT has a strong Christian, moral worldview about helping others and giving back to the community in the Name of the Lord. The movie also promotes family, forgiveness, Jesus, and Scripture. However, the movie is too long, with musical numbers that could have been shortened. Also, the singing is only average. Finally, BE THE LIGHT is marred by a couple politically correct elements. A white pastor is depicted as racist, and a man publicly acknowledges his homosexuality but says he loves Jesus and wants to use his voice to sing for Jesus. MOVIEGUIDE® advises caution for older children for BE THE LIGHT.

(CC, BB, PC, Ab, Ho, L, V, S, AA, D, MM):
Dominant Worldview and Other Worldview Content/Elements:
Strong Christian, moral worldview as a group of people aim to do good and give back to their community in the Name of the Lord, family and forgiveness and helping others are extolled, a Cross necklace is worn, loving Jesus is mentioned, Scripture is referenced, and a church service is seen, but marred by some politically correct content where a white pastor is depicted as a racist and doesn’t adhere to biblical standards of forgiveness and loving others like Jesus loves us, but he’s rebuked, and there’s an unrebuked homosexual element where a man publicly acknowledges his homosexuality but also says he loves Jesus and wants to use his voice to sing for Him
Foul Language:
One obscenity and one light obscenity, pastor calls black men thugs and tears them down in front of his church congregation
Violence:
Father slaps son across the face, man talks about how other men spit on him and nearly started to beat him up
Sex:
A character publicly admits he’s a homosexual, and it’s not rebuked
Nudity:
No nudity, but a woman’s midriff is shown several times
Alcohol Use:
Mother stays out drinking and gets drunk, but it’s rebuked, there’s conversation about how daughter went off the deep end and partied and drank when her mother died
Smoking and/or Drug Use and Abuse:
Man smokes cigarettes several times, but he’s encouraged to stop; and,
Miscellaneous Immorality:
Dysfunctional father/daughter relationship but it’s eventually fixed, a dysfunctional father/son relationship isn’t fixed, lying, racism but rebuked, stealing, and grudges are held against other people.

BE THE LIGHT opens with a young girl and her father singing together. Cut to present day, Celina, the young girl from the beginning, is at a bar getting drunk and hanging out with a man she just met. Celina arrives home late the next morning. She’s a mess and misses cooking her daughter Maria’s birthday breakfast. She also makes her friend late for work, because they share a car.

Maria reminds Celina she has a job interview and tells her she laid a dress out for her. The interview seems to go well until it comes up that Celina has a possession charge on her record. Later that evening, Celina and her friend throw Maria a little birthday party. When the mail arrives, Celina gets a letter from her estranged father, Ramon.

The letter informs Celina that Ramon has stage four pancreatic cancer and doesn’t have long to live. After not seeing or speaking to her father for nine years, Celina decides she has no choice but to go see him. When she arrives at her childhood home, she’s met by an old friend, Marvin, who’s taking care of her father. Marvin looks worried, but Celina brushes by him and goes inside.

When Ramon sees Celina, he gets very angry and confused. Ramon has no idea how Celina found out about his sickness or why she’s there. Ramon still holds a grudge about Celina’s past and the mistakes she made. When Celina and Ramon connect the dots that Marvin sent the letter, both are upset. However, Marvin explains to Celina that he needs help with insurance and money, and only the family can do that. Celina agrees to continue to help, even though it makes Ramon upset.

Cut to two guys who are friends of Marvin. They’re trying to perform in the Gold Standard singing competition to win $5,000 for Ramon. Also, Marvin wants to open a community center and call it a church. Along with providing children with a place to play, Marvin wants the center and church to help needy people in the neighborhood, and Ramon is the first person on his list.

However, Marvin, Celina and their friends have bad pasts that could get in the way of them doing good in their community. Will other people in the community forgive and help these adults create a new legacy for themselves?

BE THE LIGHT contains positive messages of forgiveness, helping others and wanting to be remembered as doing good in the world, but does a poor job at executing it. The lackluster movie wants to be a musical of sorts, but fails to have any outstanding singers or actors. The movie is also extremely long. It ends with a stretched out musical competition that takes away from the power of the movie’s positive ending.

Watch BE THE LIGHT: