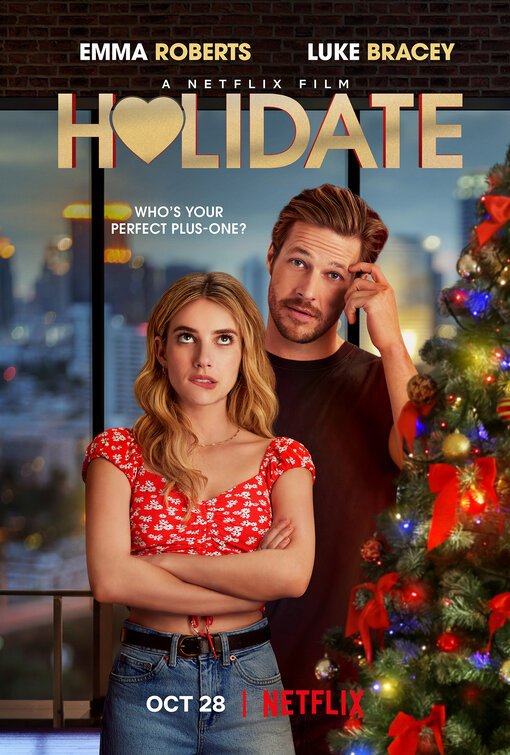 HOLIDATE is a romantic comedy about two young adults who want someone to accompany them on dates for the holidays but without the commitment of being anything more than friends. After spending an uncomfortable day during Christmas with the woman’s family, Jackson, a pro golfer, and Sloan accidentally meet at a gift return counter in the local mall. They bond over their horrible Christmas holidays and mutually decide to be each other’s “holidate” for every festive occasion during the upcoming year. The arrangement suits them until Sloane gets cold feet when things turn serious.

HOLIDATE is well produced with appealing performances, a solid script, and amusing holiday comedy. However, it has a mixed pagan worldview with some moral elements. The two leads do whatever they want, both sexually and emotionally, but ultimately their antics lead them to realize that love is truly what they want. Also, marriage and family are depicted as important, and there are some positive, but mostly light, Christian references. Sadly, though, HOLIDATE contains lots of strong foul language and strong lewd, immoral behavior. So, it’s inappropriate for media-wise viewers.

(PaPa, B, Ro, C, LLL, VV, SS, N, AA, DD, M):
Dominant Worldview and Other Worldview Content/Elements:
Strong mixed pagan worldview with some moral elements where the two leads do whatever they want, both sexually and emotionally, but ultimately, their antics lead them to realize that love is truly what they were seeking, marriage and family are depicted as important, but there are also some Romantic elements as characters dream about being content romantically in life, plus some Christian elements as there’s even a comment about baby Jesus and the celebration of both Easter and Christmas but there’s no real emphasis on the real reasons for the season sadly, and there’s a comment that recognizes the existence of Hell
Foul Language:
At least 57 obscenities (about half are “f” words), 10 strong Jesus profanities, 24 light profanities, some crude talk about going to the bathroom, a comment about a menstrual cycle starting as a teenager, and four slang words used to describe female anatomy
Violence:
Men shoot fireworks aimed at someone else, and male character accidentally shoots his finger off with a firework and has to get it sewn on again, and there’s blood
Sex:
Strong sexual content overall includes implied fornication between lead characters as clothes come off, implied oral sex and crass conversations about it, implied sexual stimulation, grinding on a dance floor by two people, characters talk about sex casually, female mentions watching porn, suggestive finger sucking, a mention of anal sex, character calls herself a whore, and then two little girls repeat the word back, mention of prostitution, infidelity when a wife kisses someone who isn’t her husband, but it’s not depicted, and the husband forgives her, and some miscellaneous sexual innuendo
Nudity:
Woman recounts a story where someone painted her naked and goes in depth about her private parts, upper male nudity in a few scenes, it’s implied woman is naked in a bathtub, woman shows to onlookers a tattoo on her midriff, woman seen in boxers and a bra, implied upper female nudity in a dance scene, woman appears in a Playboy bunny costume during Easter, and a woman’s pregnant belly is shown:
Alcohol Use:
Drinking throughout the movie and characters have a cavalier attitude about drunkenness
Smoking and/or Drug Use and Abuse:
Woman smokes, but the other characters in the movie don’t condone it, plus characters smoke marijuana and get high; and,
Miscellaneous Immorality:
Name-calling.

HOLIDATE is a romantic comedy about two young adults who want someone to accompany them on dates for the holidays but without the commitment of being anything more than friends. HOLIDATE has a strong mixed pagan worldview with light moral and Christian elements, but it has an unacceptable combination of frequent foul language and lewd immoral behavior.

The woman, Sloane, is “happy” sitting at the children’s table on Christmas Day with her family. Jackson, a pro golfer, thought his Christmas date with Sloane and her parents was “casual,” but they were both kidding themselves. In the first place, Slone’s younger brother gets engaged at Christmas. Meantime, all the while, Slone’s mother makes snide comments about Sloan being the last single child in the family. Sloane’s family also makes fun of the fact that she works from home.

The next day at the mall, Jackson shows up to a department store to return a pair of khaki pants, and Slone is right behind him at the returns counter. After they strike up a deal for their items with the lady behind them, they bond over their horrible Christmas holidays and mutually decide to be each other’s “holidate” for every festive occasion during the upcoming year.

Next, they agree to be one another’s holidate for New Year’s Eve. After New Year’s, the holidaters meet up for Valentine’s Day, Easter, July Fourth, Labor Day, and so forth. However, they start blurring the lines between being casual friends and a romantic couple, and people start noticing.

Things only escalate at Sloane’s brother’s wedding. Should she take Jackson? Is that too much of a commitment, even though the wedding falls on Labor Day and, ergo, could be one of their scheduled holidates? Jackson makes the decision easy for Slone and winds up taking her older aunt as his date, while Slone goes with a doctor her mother wants her to date and hopefully marry.

Awkwardly, Slone and Jackson’s wedding dates wind up having more fun with one another than Jackson and Slone, which ultimately brings them closer together as more than friends. After spending the night together, however, Slone shuts Jackson out of her life. What did he do wrong? he wonders. Only time will tell.

HOLIDATE has great picture quality and a script with a solid timeline that matches the major holidays to help viewers track with the characters’ development. There are some pretty relatable holiday tropes that are classic, which increases the movie’s overall entertainment value. For instance, among the topics covered are ugly Christmas sweaters and feeling weird about being single on Valentine’s Day.

HOLIDATE has a mixed pagan worldview with some moral elements. The two leads do whatever they want, both sexually and emotionally, but ultimately their antics lead them to realize that love is truly what they really want. Also, marriage and family are depicted as important. In addition, there’s a positive comment about the baby Jesus as well as celebrations of both Easter and Christmas. Sadly, however, despite the positive elements, the movie’s pagan worldview contains lots of strong foul language and strong lewd content. This crude combination makes HOLIDATE is an unacceptable romantic comedy that will turn off media-wise viewers.