"Saving Family to Save the World" 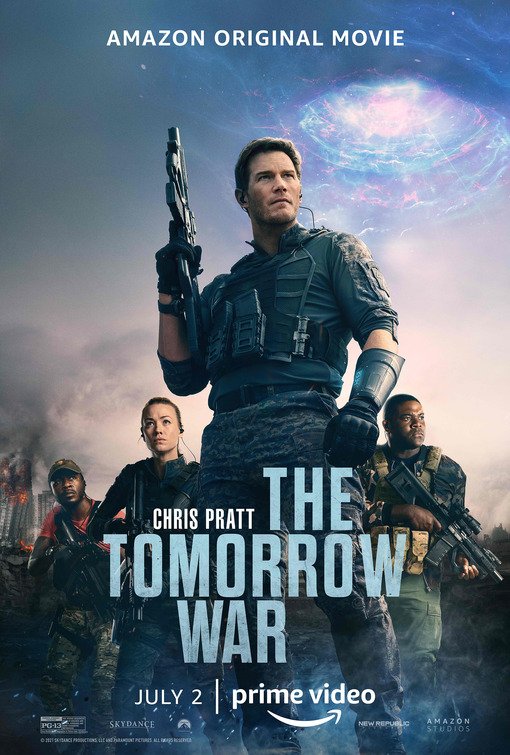 THE TOMORROW WAR is a superb science fiction thriller streaming on Amazon Prime. Chris Pratt stars as Dan Forester, a former soldier and biology expert enjoying life in December 2021 with his wife and 9-year-old daughter. Some soldiers from 2051 suddenly interrupt a World Cup soccer game. They tell the world that future humanity needs help defeating a horde of alien monsters. One year later, humanity is losing the war. Because of his expertise and military experience, Dan is drafted to travel to 2051 to help retrieve 12 lab vials that could mass produce an alien-killing toxin.

THE TOMORROW WAR takes a while to get going and has lots of foul language and very violent battles with scary alien monsters. Once it gets going, it delivers lots of action-packed, visceral excitement, emotionally powerful uplifting moments, and some really enjoyable funny lines. Best of all, THE TOMORROW WAR has a strong moral, pro-family worldview, with strong redemptive content. It celebrates family, marriage, positive parent-child relationships, sacrifice, second chances, reconciliation, and American individuality. The foul language and violence in TOMORROW WAR warrant extreme caution.

(BBB, CC, PP, ACAC, E, LLL, VVV, S, M):
Dominant Worldview and Other Worldview Content/Elements:
Very strong moral, pro-family worldview celebrates family, marriage, restoration, positive parent-child relationships, a father’s relationship to his daughter, and reconciliation between a father and a son (including the hero is focused on saving his daughter), with some strong redemptive elements promoting second chances and sacrifice, and there are light references to Christmas in an opening sequence, plus story has a Pro-American celebration of the individual against big government and against the United Nations when the hero, his estranged father and three friends decide that the U.N. and the world’s governments can’t be trusted to have the strength and the competence to do the right thing, so they take action to save the world themselves at the end, but story regrettably does have an environmentalist plot development that relies on false apocalyptic global warming theories about global warming melting a large glacier
Foul Language:
At least 68 obscenities (mostly “s” words with one “f” word), three GD profanities, one Jesus profanity, two light profanities (one OMG and one “God”), and 9-year-old girl tells her father that scientists discovered an important medicine by looking at some worms and “poop”
Violence:
Some very strong violence and lots of strong action violence of soldiers fighting hordes of large, vicious, scary alien monsters that can fling bony spikes to pierce people’s bodies, monsters hurl these spikes in multiple scenes, monsters grab people and impale people with their large claws and chomp people with their large sharp teeth, soldiers’ bodies get crushed and smashed by monsters, soldiers frequently fire automatic weapons at alien monsters, soldiers use weapons to rip off heads of a few monsters, a toxin can cause bodies of monsters to dissolve or explode, humans flung against large objects, two or more characters are stabbed in stomach by monsters, soldiers fall to their deaths, alien monster green blood spews onto some soldiers occasionally, etc.
Sex:
One character makes a comical sexual reference about a female celebrity
Nudity:
No nudity
Alcohol Use:
No alcohol use
Smoking and/or Drug Use and Abuse:
No smoking or drugs; and,
Miscellaneous Immorality:
Hero is estranged from his father, but they are reconciled by the end.

THE TOMORROW WAR is a superb science fiction thriller on Amazon Prime about a former soldier and biology expert in 2022 who’s sent 30 years into the future to help retrieve some important lab vials that may help scientists in 2022 create and mass produce a toxin that can destroy a horde of large, scary alien monsters that are swiftly wiping out the human race in 2052. THE TOMORROW WAR takes a while to get going and has lots of strong foul language and very violent battles with scary alien monsters, but once it gets going, it delivers action-packed, visceral excitement with a strong pro-family message, several wonderful uplifting moments and some very funny lines that add to the movie’s entertainment value by relieving some of the serious drama and nearly constant action.

The movie opens in December 2021 with Dan Forrester, a biology teacher, and his wife, Emma, celebrating their daughter, Muri’s, ninth birthday, at a party centered around the FIFA Club World Cup being held in Japan. Dan becomes depressed when he learns he won’t be getting the big lab job he wanted. As he settles down with Muri to watch a World Cup soccer game on TV, the game is suddenly interrupted by a group of soldiers who suddenly materialize on the field. The female leader tells the crowd, and the whole world, that they’re soldiers 30 years from the future and humanity needs the 2021 world’s help to defeat a horde of alien monsters that have invaded Earth.

Twelve months later, the situation seems dire. Humanity in 2051 is losing the fight against the large, incredibly strong alien monsters, who have two large tentacles that can hurl bony spikes into their victims, large claws and a vicious-looking set of teeth. Although the world in 2022 has instituted a military draft, less than 500,000 people are left in 2051, and the monsters are about to overrun the only time machine facility left that can return draftees back to 2022.

Because of his biology expertise and his military experience in the Iraq War, Dan is drafted to travel into the future to help retrieve important biological material and 12 serum vials from a lab in Miami Beach, Florida. If they can get the research material and vials safely back to 2022, scientists can mass produce a toxin that will destroy all the alien monsters.

Of course, the lab is being surrounded by a group of the vicious alien monsters. Also, there’s only one time machine facility left that can send the lab material back to 2022.

THE TOMORROW WAR takes a while to get going, but some of those beginning scenes set up important plot developments that add to the viewer’s enjoyment later. Once the movie gets going, however, it delivers lots of action-packed, visceral excitement, several emotionally powerful, uplifting moments, and some very funny lines that add to the movie’s entertainment value. The musical score is sometimes repetitious, but often heart-pounding.

Best of all, THE TOMORROW WAR has a strong moral, pro-family worldview, with some strong redemptive content. The movie celebrates family, restoration, marriage, positive parent-child relationships, reconciliation, sacrifice, and second chances. Most importantly, the hero becomes focused on saving his daughter in the movie’s second half. This theme leads to a powerful ending. In addition to the movie’s moral, redemptive content, the movie’s third act has a subplot that celebrates American individuality. Without giving away the subplot, the hero, his father and three friends decide that the U.N. and the world’s governments can’t be trusted to have the strength and the competence to do the right thing. So, they take action to save the world themselves at the end.

That said, MOVIEGUIDE® advises extreme caution for the gratuitous foul language and the intense violence in THE TOMORROW WAR. The movie also has an environmentalist plot development relying on apocalyptic global warming, a theory that’s been debunked by many scientists looking at the empirical, scientific facts.