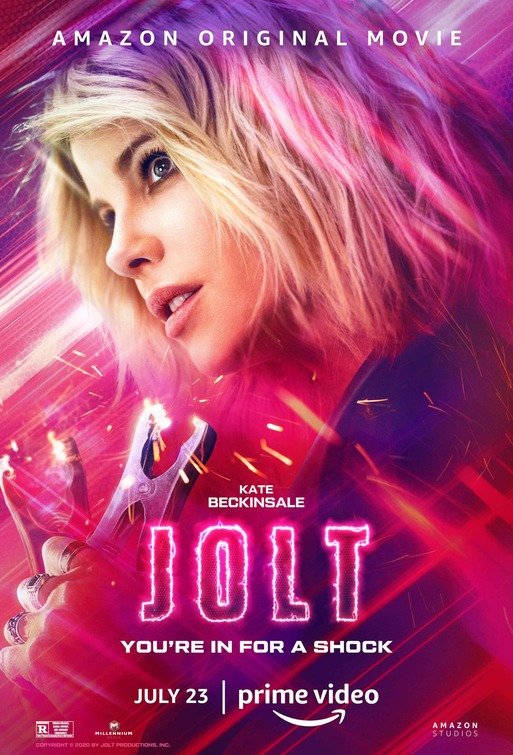 JOLT is an ultraviolent thriller on Amazon Prime about a woman who carries an electroshock device to stop her violent urges. As a child, Lindy was diagnosed as having no control over her violent impulses. Now, she gives herself electroshocks whenever she feels the urge to be violent. Lindy has dinner and a sleepover with a nice man named Justin. However, Justin turns up dead in a dumpster with two gunshots, and Lindy’s left to wonder if she killed him in a fit of rage so severe she forgot her actions. Two cops suspect she’s the killer. So, Lindy goes on a rampage to figure out who killed Justin and clear her name.

JOLT is devoid of humanity. It’s a platform to show people viciously pummeling each other. The plot is pretty thin and races to a conclusion in just 90 minutes. JOLT is a shock to the senses in negative, debasing ways, with nothing positive to recommend it. Besides extreme violence, it has many obscenities, explicit sex, lots of lewd dialogue, and some substance abuse. Media-wise viewers will want to avoid JOLT.

(PaPaPa, FR, Ev, Ho, LLL, VVV, SSS, N, A, DD, M):
Dominant Worldview and Other Worldview Content/Elements:
Very strong pagan worldview about a violent woman who goes to look for the person who murdered her latest boyfriend, woman practices meditation, woman mentions evolution, and there’s brief homosexual content when woman takes a photo of two women holding hands
Foul Language:
At least 82 obscenities (more than 50 “f” words), one JC profanity, three light profanities
Violence:
Incredibly brutal violence frequently throughout, plus lots of strong action violence, with a recurring theme of showing the heroine getting electroshocked in order to control her violent impulses (these shocks get more severe and graphic as the movie progresses), lots of punching and kicking, several graphic stabbings, a woman has her head slammed repeatedly on a bathroom stall wall until she’s unconscious simply for talking too loud on her cellphone, a woman kicks the person behind her in a yoga class and shoves another person aggressively during meditation (these two moments are portrayed comically), many shootings, car chase that’s extremely destructive to property, a man and woman strangle each other using a chain, the woman is hung from a hook in an attempt to choke her to death, and woman kills assailant by kicking him repeatedly in the groin until it’s obvious he’s dead
Sex:
Rough sex with lots of aggression and positions in one montage of the heroine’s past exploits, one sex scene set during the story, two women briefly shown holding hands, and many verbal references to sex, including sadomasochism
Nudity:
Upper and rear male nudity during sex and when man is on top of a woman, and woman dressed in lingerie
Alcohol Use:
Some alcohol use and it’s mentioned woman’s father was an alcoholic
Smoking and/or Drug Use and Abuse:
Brief smoking, and woman has a pill addiction, and a doctor injects a sedative into her to stop the addiction; and,
Miscellaneous Immorality:
Betrayal occurs, and there’s some revenge, plus a biological male actor pays a female cop because he’s “transitioned.”

There’s a disturbing trend in recent action movies for women to be even more aggressively violent than men, as seen in the Netflix movie GUNPOWDER MILKSHAKE and to a slightly softer extent in BLACK WIDOW. Add in the recent bomb ZOLA as well, as a movie in which the heroine is subjected to sexually degrading situations but survives the experience in the end, making her a feminist hero in many critics’ eyes.

The new Amazon Prime movie JOLT adds to this assortment of films, by starring frequent action hero Kate Beckinsale of the UNDERWORLD film series as Lindy, a woman who was diagnosed as having no control over her violent impulses as a child. She was subjected to many deviant experiments while being held in a mental hospital, but, as an adult, has been set free to live a normal life. However, there’s one major twist. She carries a device that gives her electroshocks if she feels the urge to be violent.

The movie tries to portray some of her outbursts comically, with a few succeeding on that level – such as kicking the person behind her in a yoga class, or aggressively shoving someone in her meditation group. However, Director Tanya Wexler doesn’t know where to draw the line a far greater proportion of the time, with scenes that are just ugly (such as Lindy smashing a woman’s head repeatedly into a bathroom stall wall just for talking too loud on her cellphone).

One night, Lindy meets a man named Justin (Jai Courtney) for dinner, and they sleep together on the first date. Since she manages to just have rough sex without killing him, Lindy considers this progress and reports her delight to her doctor (Stanley Tucci), claiming she’s well on her way to being cured.

Just then, however, Justin turns up dead in a dumpster with two gunshots to his head, and Lindy is left to wonder if she killed him in a fit of rage so severe she’s forgotten her actions. Two cops suspect she’s the killer, and so Lindy goes on a rampage to figure out who killed Justin and clear her name.

Can she pull off this dangerous quest? The answer isn’t as cut and dry as you might expect, but the twist involves having an unexpected resolution that’s too ludicrous to work.

JOLT is devoid of any sense of humanity. It’s just a platform to show people pummeling each other viciously. The plot is pretty thin and races to a conclusion in just over 90 minutes (less than that if you consider credits eat up five minutes of screen time). Thus, while Beckinsale makes for an effectively physical killing machine, and the cast includes some surprisingly solid actors (including Stanley Tucci, Bobby Cannavale as one of the cops on her trail, and Susan Sarandon as the narrator who makes a surprise appearance near the end), JOLT is a shock to the senses in negative, debasing ways with nothing positive to recommend it on any sense of genuine merit. Besides extreme violence, it has many obscenities, explicit sex, lots of lewd dialogue, and some substance abuse.