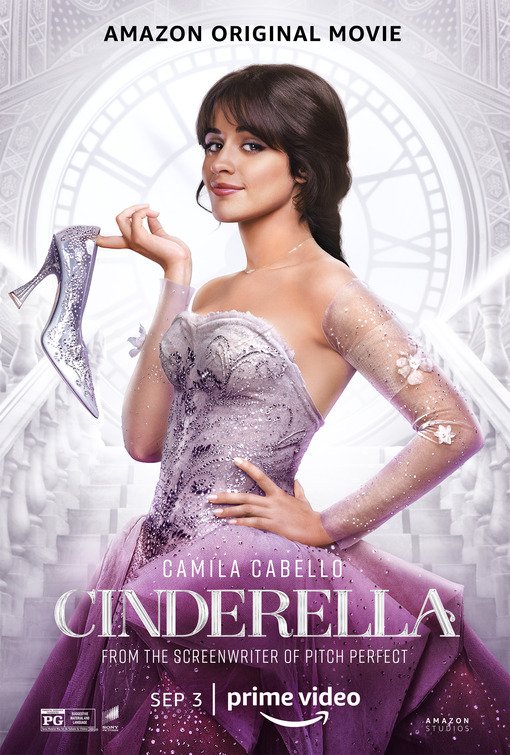 The CINDERELLA (2021) movie streaming on Amazon Prime is a modern re-telling of the classic fairy tale. It follows the original fairy tale’s plot, with modern-day twists. In this version, Cinderella has a talent for designing and making beautiful dresses. She longs to own her own dress shop. However, she lives in an old-fashioned kingdom that doesn’t allow women to do that. So, when Cinderella falls in love with Prince Robert at the ball, she refuses to marry him and ascend the throne because she’d rather become a famous dress designer.

CINDERELLA is engaging, funny and colorful, with some great singing and dancing and even a prayer to God in one song. However, the plot’s modern-day twists give the movie a strong Romantic, feminist worldview. For example, instead of getting married, Cinderella and the Prince decide to travel the world together so Cinderella can pursue her dreams. Also, the fairy godmother is an effeminate man, and characters are encouraged to follow their feelings instead of doing the right thing. CINDERELLA (2021) has one obscenity and 10 light profanities. So, MOVIEGUIDE® advises extreme caution.

(RoRoRo, FeFeFe, CapCap, C, B, Ho, E, LL, V, M):
Dominant Worldview and Other Worldview Content/Elements:
Very strong Romantic, feminist worldview in a modern telling of the fairy tale “Cinderella,” attacks duty and “old-fashioned traditions” in a country where women can’t work and own a business, and the movie’s solution is to let people do whatever they want to do and let the daughter become ruler instead of the son, people sing “If you tell me I’m wrong, I don’t want to be right,” and Cinderella and the Prince go away together, but there is no marriage (which fits the movie’s non-Christian, Romantic, feminist, and antinomian or lawless worldview), but the movie has some strong pro-capitalist elements where Cinderella dreams about owning her own dressmaking shop, and there are some light Christian, moral elements in the first act where Prince prays to the “Lord” in a song about finding somebody to love, and the prayer is answered right away when he sees the beautiful Cinderella acting courageously, wittily and boldly, and there’s a song where Cinderella repeatedly sings, “Love will save the day,” and there are also some other light moral elements about kindness and finding true love and being wise, plus some light homosexual elements where effeminate man narrates the story and later shows up as Cinderella’s “Fairy Godmother” (the flamboyant coat he wears looks like a dress over some glittering pants) and an environmentalist comment when King’s daughter advocates using wind power instead of “filthy coal”
Foul Language:
One “Holy Hell” obscenity and 10 light profanities (one of them is a borderline “What in God’s name?”)
Violence:
Light violence and slapstick comedy such as stepmother throws ink onto beautiful new dress Cinderella made for the ball so that Cinderella can’t go to the ball, mouse false into an open drawer, mice change back into mice at midnight and fall down, carriage changes back to an object and Cinderella falls onto the road
Sex:
No sex
Nudity:
No nudity
Alcohol Use:
No alcohol use
Smoking and/or Drug Use and Abuse:
No smoking or drugs; and,
Miscellaneous Immorality:
Stepmother mistreats Cinderella and her two daughters, and the King gets angry at his wife and son.

The new CINDERELLA (2021) movie streaming on Amazon Prime is a modern re-telling of the fairy tale where Cinderella falls for the Prince but doesn’t want to get married and forego her dreams of becoming a famous dressmaker. CINDERELLA is engaging, funny and colorful, with some great singing and dancing and positive references to God in one song, but overall, it has a Romantic, non-Christian, feminist worldview about marriage and duty that extols personal feelings rather than transcendent moral values.

The movie is narrated by the movie’s Fairy Godmother, who turns out to be an effeminate man who calls himself “Fabulous G.” The narrator sets the stage for the movie. He says the kingdom of King Rowan and Queen Beatrice is a traditional, old-fashioned kingdom. King Rowan wants his son, Prince Robert to succeed him on the throne. He would like Robert to marry a princess from a powerful kingdom, but Robert doesn’t like her.

Meanwhile, a young woman named Ella is under the thumb of her stepmother, Vivian, since her father passed away years before. Ella is confined to the basement of the house, where she does the daily chores and serves tea and food to her stepmother and the stepmother’s two daughters. So, the two daughters nickname her Cinderella because her face and clothes get marked with cinders from the fire in the basement. Cinderella has a talent for designing and sewing dresses and dreams of owning her own dress shop. However, her stepmother thinks Cinderella’s dreams are “blasphemy.”

Back at the palace, Prince Robert is frustrated by all the young women coming to the palace that want to marry him. “I feel nothing for these women,” Robert tells his father and mother. Meanwhile, King Rowan ignores the clear desires of his daughter, Gwen, to become more involved in running the kingdom. He suggests to Robert they hold a ball so Robert can choose his future wife. Robert doesn’t think he will find someone to love at a ball. So, later when he’s alone, he sings “Somebody to Love,” the popular song by the rock group Queen. In the lyrics, Robert wonders why the Lord hasn’t provided him with a woman he can truly love. However, he prays to God in the song that somebody out there will find him somebody to love.

The royal family announces the ball from the palace balcony. Cinderella attends the announcement but can’t see anything from the back of the crowd. So, she climbs the statue of King Rowan’s father. The King calls attention to Cinderella’s sacrilege and orders her to climb down from the statue. However, Cinderella answers the King boldly, with witty comments. She’s also very beautiful. So, naturally, Prince Robert is immediately smitten with her. Cinderella is clearly a commoner, though. So, Robert tells his father he won’t attend the ball unless he opens it up to all the women in the kingdom. Reluctantly, King Rowan agrees.

Prince Robert and his two friends go searching for Cinderella, but they’re in disguise. At the same time, Cinderella decides to try to sell a beautiful dress she made to the ladies in the town square. Robert spies her there, buys the dress from her and asks her to attend the ball with him. Cinderella finds Robert cute and funny. She also thinks that attending the ball will help her advertise her beautiful dress and further her desire to become a dressmaker. So, she agrees.

However, when it comes time for Cinderella to go to the ball, her stepmother says she can’t go, because she’s arranged a marriage for her with a rich young man. When Cinderella refuses, her stepmother throws ink on the beautiful dress Cinderella’s wearing.

Depressed, Cinderella sadly sits in the basement. Enter Cinderella’s Fairy Godmother, who actually is an effeminate man dressed in a sparkling suit and wearing an extravagant cloak that looks like a dress. Using his magical powers, Fab G, short for “Fabulous Godmother,” uses one of Cinderella’s dress designs to make a beautiful dress for her. He also gives her two sparkling, high-heeled glass slippers and transforms a crate into a fancy carriage with two magnificent white horses. For footmen, he transforms three mice. However, he warns Cinderella the magic will wear off at midnight.

This modern version of CINDERELLA follows the original fairy tale’s plot, with some modern-day twists. The movie is engaging, funny and colorful, with great singing and dancing. Pop star Camila Cabella makes an excellent Cinderella. As Prince Robert, Nicholas Galitzine also does a great job singing the Queen song. At the ball, Nicholas and Cabella do a duet version of Ed Sheeran’s song “Perfect.” Another really fun song and dance scene comes from Idina Menzel of the FROZEN movies, who sings an entertaining version of Madonna’s hit “Material Girl” to her two daughters.

However, the other songs don’t have as pretty a melody as these three songs. Also, the modern-day twists in the plot give the movie a strong Romantic, non-Christian, feminist worldview. For example, instead of simply reforming the kingdom’s values and laws to allow women to run a business, the movie promotes the archetypal Romantic dogma of follow your feelings. In the end, instead of getting married, Prince Robert and Ella just run away together, to travel the world. In return, King Rowan appoints his daughter, Gwen, the first in line to succeed him. Also, it’s clear that Princess Gwen wants to make lots of changes to the way things are done. Finally, at one point, people sing, “If you tell me I’m wrong, I don’t want to be right.” These kinds of Romantic values and attitudes are narcissistic and often even selfish, and ultimately can lead to outright hedonism. CINDERELLA also has one obscenity and 10 light profanities. So, overall, MOVIEGUIDE® advises extreme caution for Amazon Prime’s new CINDERELLA (2021).