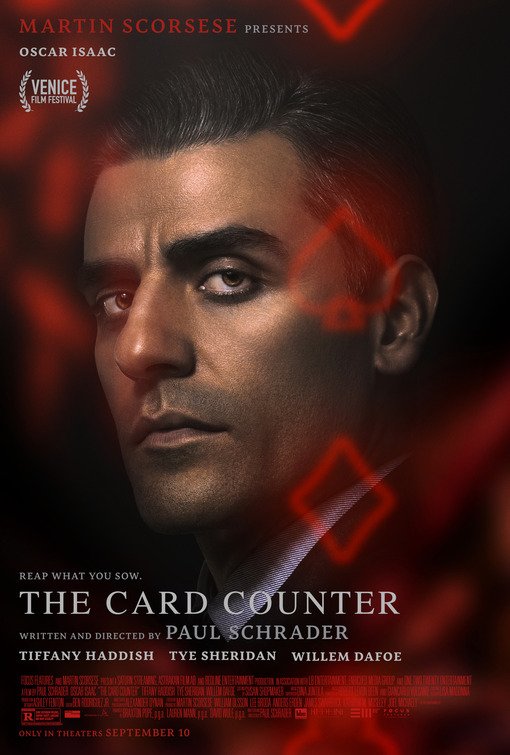 THE CARD COUNTER is a somber drama about a former soldier who served time in federal prison for abusing prisoners at Abu Ghraib Prison in Iraq. The man, Bill, learned to count cards in prison. Now, he travels around the country playing blackjack and poker to make a living. Bill decides to help the revenge-minded, aimless adult son of another soldier there, who ended up abusing his family before killing himself. To do so, Bill agrees to become a tournament poker player for a warm, funny black woman, who manages a group of such players.

THE CARD COUNTER is a compelling, fascinating drama and character study, but it’s a bit deliberative and too methodical. However, the writer/director, who had a Christian background growing up, has inserted some Christian, biblical themes of guilt, penance, justice, redemption, and atonement. That said, the movie’s somber, depressing ending undercuts its Christian, biblical themes. THE CARD COUNTER also has some strong foul language, images of bloody violence and an explicit image of prison nudity. Finally, the protagonist does end up sleeping with the woman who hires him.

(C, B, Pa, AP, LL, VV, SS, NNN, A, D, M):
Dominant Worldview and Other Worldview Content/Elements:
Light Christian, biblical worldview marred by some immoral pagan elements about guilt, penance, justice, redemption, and atonement where a man tries to lead a younger man away from taking violent revenge against a man who unintentionally destroyed the young man’s family, but the young man decides to take revenge anyway and tragedy results, so the older man takes a violent action to provide some semblance of justice for the boy, though there’s a semblance of grace, mercy, love, and solace at the very end between a man and a woman, though it’s understated and represented by a visual image of human connection between them, plus protagonist is upset by an immigrant’s exuberant patriotism in one scene when the immigrant wins a poker hand or tournament
Foul Language:
22 obscenities and two light profanities
Violence:
Slightly bloody, disturbing images of prisoner abuse at Abu Ghraib Prison in Iraq (a real incident or series of incidents), man threatens and scares and bribes a young man not to seek violent revenge but to return home and reconcile with his estranged mother, one convict goads another convict to punch him three times in a prison, and man emerges bloodied after challenging another man (who’s a villain in the movie) to hurt one another significantly (the violence is not shown but some of the screams of pain between them is heard)
Sex:
Partially depicted fornication, and two or so sexual comments, plus a reference to prisoners being “sexually humiliated” at Abu Ghraib prison in Iraq
Nudity:
An image of full frontal male nudity in one scene in Abu Ghraib Prison in Iraq (where 11 soldiers were convicted of abusing prisoners), rear male nudity in another scene in Abu Ghraib and images of upper male nudity
Alcohol Use:
Alcohol use throughout, mostly in casinos and at casino bars
Smoking and/or Drug Use and Abuse:
Smoking, but no drugs; and,
Miscellaneous Immorality:
Revenge, but it leads to tragedy, and a conflict between two men becomes a vigilante challenge from one of the men against the other man.

THE CARD COUNTER is a somber drama about a former soldier who served time in prison for abusing prisoners at Abu Ghraib Prison in Iraq, who tries to help the revenge-minded son of another soldier there, who ended up abusing his family before killing himself. THE CARD COUNTER is a compelling and fascinating, though deliberative, drama about guilt, penance, justice, redemption, and atonement, but the somewhat depressing, somber ending plus the movie’s foul language and images of violence and prison nudity undercut the script’s Christian, biblical themes.

Written and directed by Paul Schrader, the writer of TAXI DRIVER, the movie stars Oscar Isaac as William Tell, who learned to count cards while serving time in federal prison for abusing prisoners at Abu Ghraib Prison in Iraq. Besides serving his time in prison, Bill tries to atone for what he did by writing in a journal about it, while he wanders the country playing blackjack and poker. A talkative, warm and funny black woman named La Linda tries to convince Bill to join her stable of celebrity poker players, but Bill just wants to stay under the radar by making a modest living counting cards. He explains to her that the casino bosses don’t mind card counters so long as they don’t win big.

Bill changes his mind about joining La Linda’s stable when he runs into Cirk (“Kirk”), the son of one of the soldiers at Abu Ghraib who also abused prisoners. Bill meets Cirk when they both happen to encounter a security consultant, who trained Bill and Cirk’s father at Abu Ghraib, giving a lecture at a security conference. Both Bill and the father served time for what they did because they posed for the famous photos of the prisoner abuse at Abu Ghraib, which brought the affair to the public’s attention. Cirk tells Bill his father came home after prison and started to drink a lot and beat him and his mother. One day, his mother simply abandoned Cirk, so his father then only had Cirk to beat.

Eventually, the father committed suicide, and Cirk now resents his mother for abandoning him. He tells Bill he wants nothing more to do with her. Instead, he wants to kidnap the consultant and torture and abuse him just like the man trained his father to do in Iraq.

Bill takes Cirk under his wing and tries to turn the young man away from trying to get revenge on the security consultant. When he learns Cirk is also carrying some college loan debt without having finished college, Bill decides to help the young man out with the debt by joining La Linda’s stable of poker players. He also wants to encourage the boy to reconcile with his mother and return to college and make something of himself.

THE CARD COUNTER is a compelling, fascinating drama and character study, but it is a bit deliberative and too methodical. It’s clear, however, that Writer/Director Paul Schrader, who was raised by strict Calvinist parents in Grand Rapids, Mich., has inserted some Christian, biblical themes of guilt, penance, justice, redemption, and atonement. For example, while writing in his journey, Bill wonders about what’s required to find true expiation for the wrongs one has done. Schrader’s clarity here is to be commended. [SPOILERS FOLLOW] Despite, however, the title character’s attempt to help the young man and turn him away from his mission of revenge, revenge still overcomes the boy. Tragedy results, and Bill makes a morally flawed decision to set things right and obtain some semblance of justice, not only for the young man and his mother, but also for the abused prisoners at the Iraqi prison.

Ultimately, the movie’s somber, somewhat depressing ending undercuts its Christian, biblical themes. In times past, Writer/Director Paul Schrader made movies that attacked Christian faith to one extent or another, such as HARDCORE, which he directed, and THE LAST TEMPTATION OF CHRIST, which he wrote. In 2018, he finished FIRST REFORMED, which had a more welcoming spirit toward basic Christian theology and faith. For example, in the movie, people call Jesus Christ the Savior, people pray, and a couple hymns are partially heard. So, the movie doesn’t really mock these examples of Christian faith, but the story is infected by a politically correct, leftist take on climate change hysteria. Thus, in the movie, the protagonist, a Dutch Reformed pastor, isn’t questioning his Christian faith’s basic theology; he’s questioning his church’s handling of a social issue. In the wake of making that movie, Schrader said in 2018 he now goes to church regularly and has always been a believer, but he also sometimes grumbles about faith-based movies being too propagandistic or about the simplicity, as he sees it, of Christian conservatives and their beliefs about faith and politics. So, perhaps it isn’t basic Christian theology that Schrader really rejects. That said, what THE CARD COUNTER and the other three movies mentioned above seem to lack is any sense of the Good News, Joy, Peace, Love, Beauty, and Fulfillment that the salvation message of Jesus Christ, as depicted in the New Testament documents, is meant to create in people. Maybe Schrader was confused by extreme forms of Christianity, he may have encountered in Michigan and Calvin College, which he attended.

THE CARD COUNTER also has some strong foul language, images of bloody violence and an explicit image of prison nudity. Finally, the protagonist does end up sleeping with the woman who hires him. In the movie’s last image, however, it’s his positive personal connection to the woman that seems to offer him, and her, some grace, mercy, love, and solace.