"It’s All About Jesus" 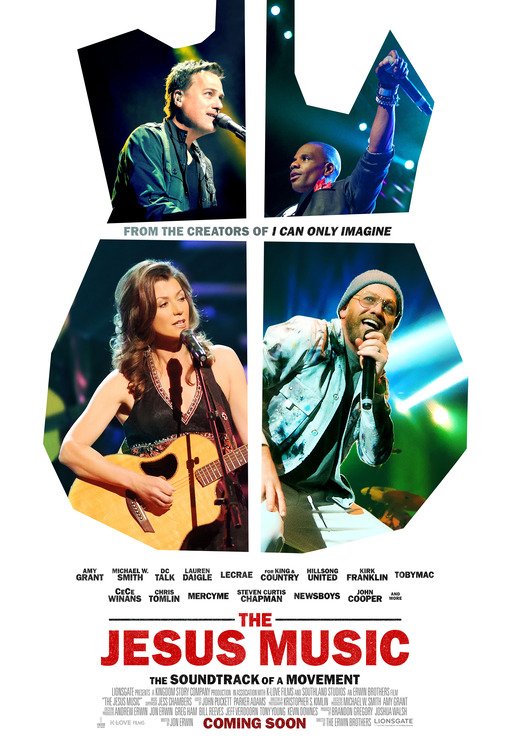 THE JESUS MUSIC is a documentary taking a historical look at Contemporary Christian Music. It includes interviews from many major figures in Christian music. The movie starts with the beginnings of Jesus Music in the late 1960s and early 1970s. Mega stars Amy Grant and Michael W. Smith discuss their encounter with the first Jesus Music album, produced by artists from Calvary Chapel in Costa Mesa, California. In 1972, Jesus Music got a huge endorsement from the Reverend Billy Graham, who spoke to 200,000 people at a Jesus Music festival in Dallas, Texas. The rest of the documentary interviews other major stars from the 1980s, 1990s and the last 20 years.

(CCC, BBB, L, V, N, AA, DD, M):
Dominant Worldview and Other Worldview Content/Elements:
Very strong Christian, biblical worldview gives an overview of the history of Christian Contemporary Music, from its beginnings in the late 1960s and early 1970s to current times, with many positive references to God, Jesus, the Holy Spirit, and Christian worship along with some references to the problems of sin and promotion of positive biblical values and the positive experience of salvation through Jesus
Foul Language:
A preacher uses the word “damnable” to describe Jesus Music, there’s a visual reference to the Christian metal band Stryper’s album “To Hell with the Devil,” there’s a comment that one band “caught a lot of Hell” for its musical style, and three light profanities occur
Violence:
Brief newsreel footage of the Vietnam War, a brief image of a street riot, references to assassination in 1963 and 1968, and an image of a policeman in riot gear firing tear gas into a crowd of student protestors
Sex:
No depicted sex or implied sex, but people tastefully mention the loose morals of the youth movement in the 1960s and in secular rock music, such as a couple mentions of the phrase “drugs, sex and rock and roll”
Nudity:
No explicit nudity but there’s an instance of upper male nudity in a baptism scene
Alcohol Use:
No alcohol use, but there’s mention of one star in Contemporary Christian Music who had an alcohol problems like his father before him, and who began talking about his alcoholism
Smoking and/or Drug Use and Abuse:
No smoking, but there are brief references to the drug culture among people in the youth movement of the 1960s and references to use of drugs in rock music, including references to the drug overdoses deaths of major figures in rock music such as Janis Joplin, Jim Morrison and Jimi Hendrix (comments are made against the use of drugs in relation to this); and,
Miscellaneous Immorality:
There is brief discussion of divorces among a few artists in Contemporary Christian Music.

THE JESUS MUSIC is a documentary giving a historical look at the development of Contemporary Christian Music, starting with its beginnings in the late 1960s and early 1970s, with numerous interviews from many of the major figures in Christian music. THE JESUS MUSIC is an impressive, pro-Christian overview that documents and captures the spirit of its subject and shows why Christian music continues to be popular, despite some of the criticism it’s received inside and outside the Church.

The movie opens with a montage of many of the Christian musical artists being interviewed. Several mention their love of music, noting how music has a way of bringing people closer to God. “You’re never going to please everybody,” Lauren Daigle says after a couple artists indicate the reaction of Christians to their music is not always positive. However, the movie notes that “Jesus Music,” as it was first dubbed, has grown to become a multibillion dollar, multi-genre industry. Every week, according to the movie, 50 million people wake up to Contemporary Christian Music, or CCM. The movie claims up front that it’s the “untold story” of the “rebels, pioneers and dreamers” who created this “Jesus Music.

The movie then launches into a history of the beginnings of this pop culture phenomenon. It lets the artists tell the story, however. Mega stars Amy Grant and Michael W. Smith discuss their first encounter with the first Jesus Music album, produced by artists from Calvary Chapel in Costa Mesa, California. Of course, there have always been gospel music songs and albums. And, country music has had many country gospel hits, such as “I Saw the Light” by Hank Williams. However, THE EVERLASTIN’ LIVING JESUS MUSIC CONCERT from Maranatha! Music announced that there was a new musical movement on the scene. “It changed my life,” Smith says.

The documentary cuts to the social turmoil in 1968, when urban riots sprouted, the country was rocked by the assassinations of Martin Luther King and Robert Kennedy, and the Vietnam War was tearing the country apart. Glenn Kaiser of the Resurrection Band says many “hippies” like him were “trying to escape the pain and misery,” but without supporting the status quo. The American Dream had become the American Nightmare, he says. However, as some of their major rock idols died from drug overdoses, the escape into drugs became a dead end for many, and God entered to fill the void. “The drugs didn’t work,” says Tommy Coomes, co-founder of the Jesus Music band Love song, which formed in 1970. His band mate, Chuck Girard, says that’s when they started to learn about Calvary Chapel in Southern California. Pastor Chuck Smith and Youth Pastor Lonnie Frisbee let people attend church in blue jeans and even barefoot, and hippies started to accept Jesus Christ as their Lord and Savior. Girard says Smith exuded love, and “there was a great power of God in that building.” “God is blowing everybody’s mind,” Lonnie says in an old video clip from the early 1970s.

From these modest beginnings, Jesus Music exploded, forming in other cities across the country. The Jesus Movement made the cover of Time Magazine. Then, in 1972, it got a huge endorsement from none other than the Reverend Billy Graham, who spoke at a huge Jesus Music festival to 200,000 people in Dallas, Texas.

In the 1980s, Contemporary Christian Music expanded beyond its folk and rock music roots to heavy metal music by such bands as Stryper. The reception to heavy metal wasn’t so receptive, but Christian heavy metal survived the criticism.

The rest of the movie interviews other major stars from the 1980s, 1990s and the past 20 years. A fair amount of time is spent discussing the importance of artists and groups such as Amy Grant, Michael W. Smith, Kirk Franklin, and the men behind such groups as DC Talk and Newsboys.

The movie contains many interesting comments about the intersection of Christian faith and music. “Faith doesn’t get passed on automatically,” Tommy Coomes of Love Song says at one point. “Every generation has to fight for it.” At another point, a voiceover speaks for many of the artists, saying, “We want to make art that’s illuminated by our faith.” “Be bold for the sake of the Gospel,” Lauren Daigle urges. “Things becomes beautiful because you nurture them,” Amy Grant says. At the end, she adds, “God is good, and you’re just one of His messy followers telling people how good He is.” TobyMac, formerly of DC Talk, inserts his own take, “God uses broken people to create songs that reach out to broken people.”

THE JESUS MUSIC is an impressive, pro-Christian overview of a pop culture phenomenon. It documents and captures the spirit of its subject. It also shows why Christian music continues to be popular, despite some of the criticism it’s received sometimes from inside and outside the Church. THE JESUS MUSIC is a stirring document of an important movement within the Body of Christ. In the end, as one of the song lyrics says, “It’s all about Jesus.”