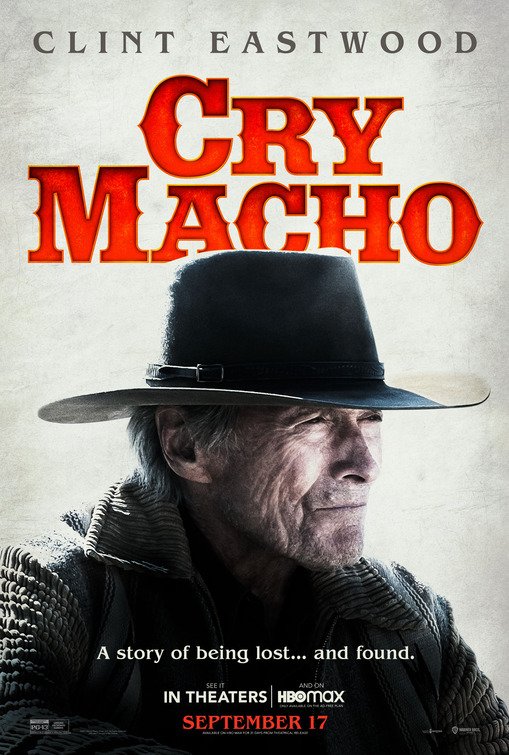 CRY MACHO stars Clint Eastwood as Mike Milo, a one-time rodeo star and retired rodeo horse breeder and trainer. A year after his friend and boss fires him, the boss asks Mike to travel to Mexico City and take back his 13-year-old boy, Raphael, from the boy’s criminal, alcoholic mother. Mike convinces Raphael to come to Texas, but the mother sends a henchman after them. So, they take the back roads. Eventually, they hide out in a sleepy little border town. They befriend a widowed woman who owns a small restaurant and takes care of her orphaned grandchildren. Meanwhile, Mike helps a local rancher train wild horses, and Raphael learns to ride.

CRY MACHO is a strange hybrid of action, heartwarming redemptive storytelling and romance. So, it meanders and seems too low key and laid back. CRY MACHO has some strong Christian content and touching, morally uplifting moments. Thus, there are references to Jesus, the Virgin Mary and God, and the widowed grandmother prays before a meal. However, CRY MACHO is marred by a lot of foul language, including numerous gratuitous profanities.

(CC, BB, FR, LLL, VV, S, AA, M):
Dominant Worldview and Other Worldview Content/Elements:
Strong Christian, moral worldview about a man finding redemption and a new home by mentoring the teenage son of his former boss and finding a new love in the form of a devout Catholic woman who runs a restaurant and takes care of her orphaned grandchildren, but the man himself is a nominal believer in God and cusses, though the teenage boy he mentors has faith in God and comes from a Catholic background, plus there’s a small building with a cross on top that inside holds a shrine to the Virgin Mary with a cross on one or more of the walls inside
Foul Language:
About 38 obscenities (some “s” and many “h” words), 10 strong profanities and one light profanity
Violence:
Bad guy runs the good guys’ car off the road, bad guy pulls a gun on a man and teenage boy, but he loses the gun, and they take his car, teenage boy has bruises on his back from being beaten, police raid an underground cock fighting event and chase after the people there, an image of a rodeo athlete falling from a bronco onto his back, and a man accuses older man of kidnapping teenage bo, but boy accuses him of beating him and shows his bruised back to some bystanders, and the bystanders start beating up the younger man as the other two escape in a car
Sex:
Younger woman in nightgown tries to seduce much older man, but he refuses, and she gets angry, a streetwalker tries to entice a man walking along the street at night, and there’s brief dialogue in one scene about the woman sleeping around
Nudity:
No nudity
Alcohol Use:
Alcohol use, and teenage boy’s mother appears drunk
Smoking and/or Drug Use and Abuse:
No smoking or drugs; and,
Miscellaneous Immorality:
Man hides information from another man about a favor he’s asking the other man to do, and teenage boy takes man’s wallet but returns it when confronted.

CRY MACHO stars Clint Eastwood as a one-time rodeo star and retired rodeo horse breeder and trainer who takes a job to travel to Mexico City and bring a 13-year-old boy home to his father in Texas and away from the boy’s criminal, alcoholic mother. Also directed by Eastwood, CRY MACHO is a strange hybrid of dramatic action, heartwarming redemptive storytelling and romance, with some strong, overt Christian content that’s marred by a lot of foul language, including numerous gratuitous profanities.

The movie opens in 1979. Eastwood plays Mike Milo, a one-time rodeo star whose wife and son died in a tragic car accident. Mike works for an old friend named Howard.

A year later, Howard comes to Mike asking for a favor. You owe me, Howard tells Milo, and Milo agrees. Howard wants Mike to travel to Mexico City to retrieve Rafo, Howard’s 13-year-old son, Raphael, whom Howard hasn’t seen for seven years. Howard’s estranged wife is not a reliable person, and Howard has heard Raphael is in some kind of trouble. He gives Milo a wad of cash to pay for expenses.

Milo gets to Mexico City and learns Rafo’s mother lives in a fancy hacienda but is somewhat of a lush who sleeps around and is involved in some kind of criminal activity. She tells Milo that Rafo ran away from home and lives on the streets, where he supports himself by engaging in cock fighting and petty crimes. She tries to seduce Milo, even in the presence of her current lover and right-hand man, but Milo’s disgusted.

Milo leaves her hacienda and goes looking for Rafo at the nearest illegal cock fight. Sure enough, he finds Rafo, who’s about to unleash his pet rooster, Macho, to fight another rooster. The police show up, but Milo and Rafo manage to hide from them in the chaos.

Milo approaches Rafo and tells him his father in Texas wants him to come live with him in Texas on his ranch. Rafo is skeptical, however. He tells Milo he doesn’t trust anyone, but Milo convinces him that the offer from his father is real.

Rafo seems convinced. He tells Milo he has to gather some of his things, but he disappears on Mike Milo and doesn’t meet up with him like he said. The next morning, however, while Mike is driving back to Texas, Rafo shows up in the back seat with his rooster. Mike is upset and tells Rafo to get out of the car. However, he soon relents, and they resume the journey back to Texas.

At their first stop to eat, though, they run into the mother’s man, Aurelio, who’s tracked them down. In front of a bunch of Mexican men in the parking lot, Aurelio accuses Mike Milo of kidnapping Rafo. The men start approaching Mike, but Rafo shows the bruises he’s received recently on his back from Aurelio, and the men start beating him up instead.

Mike and Rafo skedaddle in Mike’s car. Mike decides to take the back roads back to Texas. Eventually, when Mike’s car gets stolen, and a second car breaks down, they end up in a sleepy little border town. They decide to hide out there. They befriend a devout Catholic woman named Marta who runs a small restaurant while taking care of her orphaned grandchildren. Meanwhile, Mike Milo helps a small rancher train wild horses, and Rafo learns to ride. Friendship and romance blossom, and Mike finds a new home, but the long arm of the Federales and Rafo’s mother soon interrupts their idyllic respite.

As a drama, CRY MACHO veers from being a touching coming-of-age story and a heartwarming story of redemption, to a tale of romance and dramatic action. It takes its time with all these stories and subplots, so it may be too laid back for those wanting something more edgy, more active or more plot driven. Rafo’s mother seems a bit too young for Rafo’s father. Also, Eastwood shows his age in a few scenes, such as when he dances with the Catholic grandmother. Otherwise, however, he seems much younger than his real age, which is 90 when he filmed the movie.

CRY MACHO has strong Christian content. There are references to Jesus and the Virgin Mary. Also, the Catholic grandmother leads a mealtime prayer in one scene, and Mike Milo and Rafo discuss the existence of God in another scene. Finally, the movie’s theme song is a strong country song that starts off with an appeal to the Lord as the singer says, “It’s never too late to find a new home.”