MY HEROES WERE COWBOYS

"A Celebration of Sowing and Reaping Love" 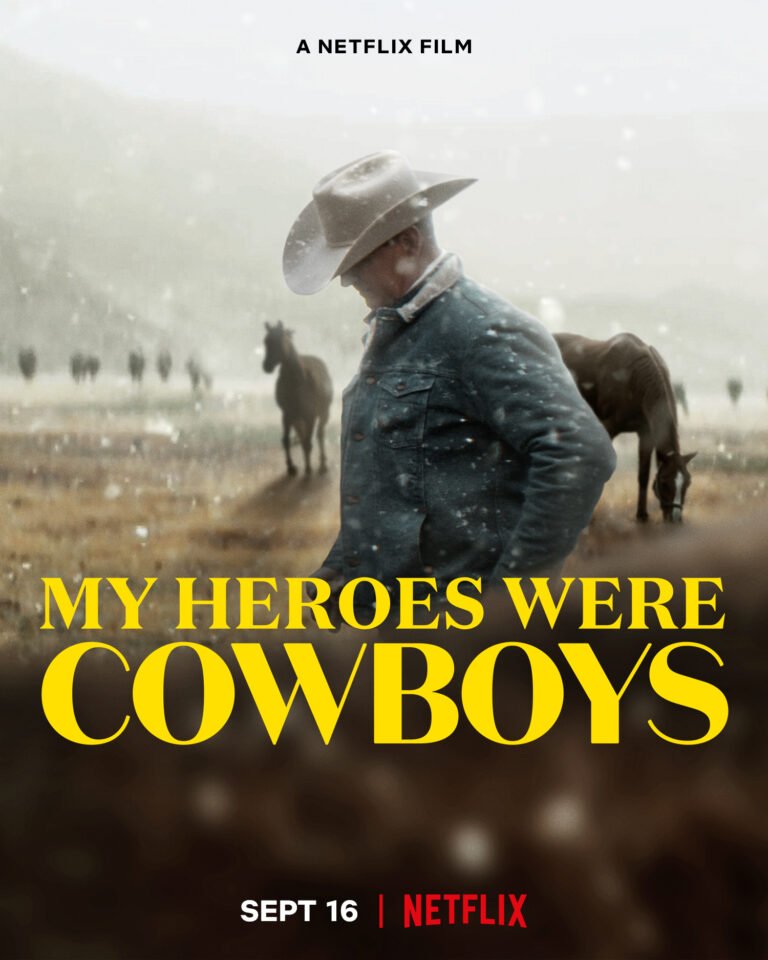 MY HEROES WERE COWBOYS is a short, uplifting documentary on Netflix. It’s about an Australian emigrant who fell in love with Hollywood westerns and horses. About 40 years ago, Robin Wiltshire moved to Wyoming, where he trains horses for commercials and movies. In the movie, Robin tells how his painful childhood in Australia was rescued by Hollywood westerns and his love for horses. The movie shows how he gently trains the horses. “As much love as you can put into them,” Robin says, “they’re going to give it back to you.”

MY HEROES WERE COWBOYS is a beautiful, impressionistic, informative love poem to horses, American westerns and American cowboys. It stresses family, humility, love, and patience. The movie has gorgeous images of horses running across the beautiful Wyoming countryside. In celebrating cowboys and westerns, not to mention Wyoming, the movie celebrates America too. Also, Robin’s work providing horses for commercials and movies is a nod to the creativity of the American free enterprise system. MY HEROES WERE COWBOYS does contain references to horses in famous cigarette commercials and popular Budweiser beer ads.

(BBB, PPP, CapCap, D):
Dominant Worldview and Other Worldview Content/Elements:
Very strong moral, Pro-American worldview celebrates American westerns, the American cowboy, Wyoming, and finding a niche as a productive immigrant to America, and stresses love, family, humility, patience, and treating animals with love and gentleness, with strong pro-capitalist elements about earning a good living by training horses to appear in TV commercials and movies
Foul Language:
No foul language
Violence:
No depicted violence, but a line of dialogue can be heard about how to beat a man to the draw in a western movie
Sex:
No sex or sexual immorality
Nudity:
No nudity
Alcohol Use:
No alcohol use, but there are references to the horses in the popular Budweiser beer commercials
Smoking and/or Drug Use and Abuse:
References to selling cigarettes and brief smoking content, but no drugs; and,
Miscellaneous Immorality:
Nothing objectionable.

MY HEROES WERE COWBOYS is a short uplifting documentary on Netflix about an Australian emigrant who fell in love with westerns and horses and moved to Wyoming, where he trains horses to appear in commercials and movies. MY HEROES WERE COWBOYS is a beautiful, impressionistic, informative love poem to horses, American westerns and the American cowboy that also stresses family, love, patience, humility, and treating animals with love and gentleness.

In the movie, Robin Wiltshire tells how his painful childhood in Australia was rescued by American westerns and his love for horses. Describing himself as “the runt” among his brothers, Robin was raised in a little country town in Australian. He couldn’t speak very well and couldn’t read, but there were always horses around him. At an early age, he was shipped off to live with his grandparents. A highly decorated war hero, his grandfather was a stern, no-nonsense type of man, who told him he’d amount to nothing. However, his grandmother was a soft-spoken woman who carefully taught him to read. She also told him, “Believe in what you are, and if you really want to do it through horses, do it.” You have to be gentle with the horses, Robin adds.

When he was about 10 or 11, Robin went into a movie theater and was “mesmerized” by the American westerns he saw on the big screen. As he mentions this, images from SHANE with Alan Ladd and Brandon De Wilde and THE SEARCHERS with John Wayne flash across the screen. While watching the westerns, Robin was intrigued by the tricks he saw that horses do, and he wanted to see if he could do them better.

Robin decided he would like to train horses in Hollywood, but STAR WARS came along and there were fewer westerns. However, he moved 10,000 miles away to Wyoming anyway. Overcoming his doubts, he decided that Wyoming was like home, especially when he saw the wild horses there.

The third horse he started to train was a wild horse named Juniper. He says Juniper was really smart and had great balance, which made him easier to train. “A horse like that only comes once in a lifetime,” Robin says.

Although the westerns were finished as a major force in the movie and television business, many of the cowboys were still alive. Two years after getting Juniper, Robin ran into Darrel Winfield, the rugged cowboy in the Marlboro Man cigarette commercials. Darrel was “the real deal,” Robin says. Juniper could rear up on his rear legs incredibly well, so they hired Robin and Juniper to do the Marlboro Man commercials. It was the first of many jobs in Hollywood for Robin. Not only did he do the Marlboro commercials, he also started training the Clydesdales for the popular Budweiser commercials, including many of the famous ones people know and love. Robin also started doing some movies, including such titles as ROCKY IV and DJANGO UNCHAINED, which includes a great scene where Jamie Foxx does a bunch of cute tricks on a beautiful white horse.

The movie’s second half shows Robin training many horses. He gets them to pirouette gracefully on one hoof and even stand on a teeter totter! He says you’ve got to establish eye contact with them, then learn how to cue them first with one eye and then the other. This not only establishes rapport with the animal; it also helps the trainer to cue the horse from anywhere behind the camera. It’s also important to gradually let the horse feel you and smell you Robin says.

Bin’s wife, Kare, says Robin is passionate about recreated the old Wild West. Robin adds that a “paragon pioneer” lives in the present but believes in the past. Juniper taught him how to be patient, humble and excited about life. Robin says Juniper “built me, and he built this ranch.” Finally, when it became time for Juniper to go, he waited for Robin to get home to say goodbye. “As much love as you can put into them,” Robin says about the horses he trains, “they’re going to give it back to you.” As Paul says in Galatians 6:7, “A man reaps what he sows”

MY HEROES WERE COWBOYS is a beautiful, informative love poem to horses, American westerns and the American cowboy. It stresses family, humility, love, and patience. The movie also has gorgeous images of horses running free across the beautiful Wyoming countryside. In celebrating cowboys and westerns, not to mention Wyoming, the movie celebrates America too. Also, Robin’s work providing horses for commercials and movies is a positive nod to the creativity of the American free enterprise system. MY HEROES WERE COWBOYS does contain references to horses on famous cigarette commercials and the popular Budweiser beer ads, however. Despite that, it’s a documentary movie that can be enjoyed by the whole family.

Watch MY HEROES WERE COWBOYS: