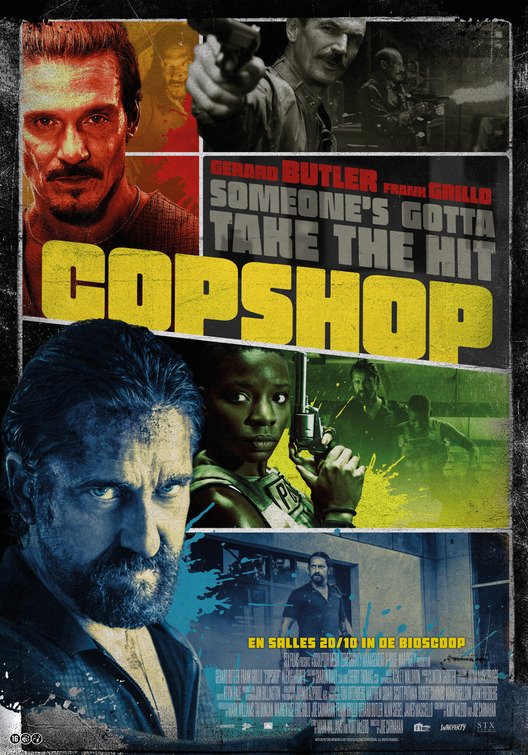 COPSHOP is an explosive but violent thriller about a female police officer in Nevada who must overcome two assassins and a corrupt cop ordered by mobsters to kill a man. To avoid one assassin, the man gets himself locked up in the two-story precinct building where Officer Valerie Young works. The assassin also gets himself locked up there, however. He tries to find a way to do his job, but Officer Young stops him. Then, a competing assassin carrying an automatic weapon arrives, and the mob enlists a corrupt cop at the precinct to help the new assassin.

COPSHOP is clearly a B movie, but it’s a well done, exciting B movie. The script has good twists that ratchet up the stakes. Even better, it succeeds in getting viewers to side with the heroic female police officer. Alexis Louder delivers a totally appealing performance as Officer Young. COPSHOP has a moral worldview that sides with law and order, which the heroine firmly supports until the very end. However, COPSHOP contains intense, super-violent gunfights, vicious murders and more than 215 obscenities and profanities.

(BB, PP, LLL, VVV, AA, DD, M):
Dominant Worldview and Other Worldview Content/Elements:
Strong moral, pro-police and pro law enforcement worldview where heroine, a police officer, fights off two assassins and a freelance facilitator who does jobs for mobsters
Foul Language:
198 obscenities (including many “f” words), four Jesus profanities, 13 GD profanities, four light profanities, drunken man wakes up and vomits, and sleeping man passes gas
Violence:
Extreme bloody gun violence includes multiple shoot outs where police are shot dead (in one gunfight, FBI agents are shot dead), point blank shootings of police officers, assassin viciously beats up man in cell who wakes up and badmouths him, bad guys shot dead, assassin wields an automatic weapon in a police precinct shooting police officers and trying to kill a police officer protected by a bullet proof room with windows, corrupt police office shoots his boss in cold blood and shoots dead an unconscious prisoner in a small infirmary, people are informed that a woman and her son have been assassinated, and it’s implied that one assassin has cut off his dead rival’s head, as he promised, to collect a bounty on him
Sex:
No sex or sexual immorality
Nudity:
No nudity
Alcohol Use:
No alcohol use but man pretends to be drunk
Smoking and/or Drug Use and Abuse:
No smoking or drug use, but a corrupt cop steals several bags of drugs form an evidence room; and,
Miscellaneous Immorality:
One male police officer is corrupt, a female police official from Vegas is corrupt, brief talk about mob corruption in Vegas and Nevada, and some lying.

COPSHOP is an explosive but violent thriller about a female police officer in Nevada who must deal with two assassins and a corrupt cop trying to kill a mob facilitator who purposely got himself locked up in the two-story county precinct building where she works. COPSHOP masterfully gets viewers to side with the heroic female police officer, but it contains many violent, bloody gunfights, vicious murders and pervasive, abundant foul language.

The movie opens with two police officers in Gun Creek, Nevada, Officer Valerie Young and her boss, Sergeant Mitchell, standing at a burger truck while admiring the new cowboy gun she just bought for herself. Mitchell hands her a birthday present he just bought off the food truck, which is another handgun. Mitchell tries to eat the burger he bought when a call comes through about a fight at a local casino. Meanwhile, a man drives a speeding, unmarked police car full of bullet holes across the desert.

When Young and Mitchell arrive at the little casino in the desert, they find a fight has broken out among the members of a fancy wedding party. Young tries to break up the fight. She fires her new cowboy gun into the air to get the people’s attention. At that moment, the guy in the speeding car gets out and sucker punches Officer Young. The man immediately surrenders, and Mitchell and Young take him to their two-story, brand new precinct building.

Shortly after that, another man is arrested when he crashes into the front of a police car of two of Young’s fellow officers. The man appears to be very drunk. The cops put the man into the holding cell opposite of the first man, whose name is Teddy Murretto. Earlier, Young had told Teddy that they keep the drunk prisoners separate from the other prisoners.

It turns out that the second man is a mob assassin named Bob Viddick, and he got himself arrested so that he can kill Teddy. Teddy Murretto is a freelance facilitator who puts mobsters together with corrupt judges, politicians, police officials, and rich businessmen. Teddy took off with some mob money when he went to meet with the Nevada Attorney General, who already had been assassinated because he refused to play ball with the mobsters. Now, Teddy’s worried about his ex-wife and son, who may be targeted.

Viddick tries to find a way to get to Teddy, but he fails, because of Officer Young’s diligence. However, a competing assassin carrying an automatic weapon arrives at the precinct and ignites all-out mayhem. Meanwhile, one of Young’s fellow officers, who owes money to the mob, is enlisted to help the new assassin.

Eventually, Officer Young finds herself totally alone trying to fight off all these bad guys. So, the question becomes, will she be able to stop them and survive?

COPSHOP is clearly a B movie, a shoot-em-up, but it’s a well done, exciting B movie. The script has some good twists and turns that ratchet up the stakes. Even better, the filmmakers masterfully succeed in getting viewers to identify with and side with the heroic female police officer. Alexis Louder delivers a totally appealing performance as Officer Valerie Young. She emerges here as an actress to watch.

COPSHOP has a moral worldview that sides with the good guy, or in this case, the good gal, who’s also an upstanding police officer. The movie also sides with law and order, which the heroine firmly supports until the very end. That said, COPSHOP contains intense, super-violent gunfights, vicious murders, 100 or more “f” words, and nearly 20 strong profanities.