"Asks the Meaning of Life but Gives No Answers" 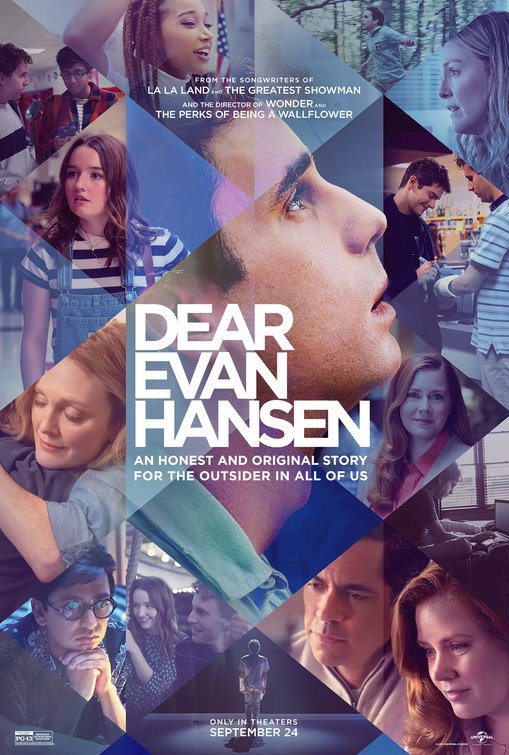 DEAR EVAN HANSEN is a musical drama about a high school student with social anxiety disorder who finds a connection with a married couple grieving their son’s death. One day, Evan Hansen writes a letter to himself, which a troubled bully named Connor steals from the school printer. The next day Evan is told Connor committed suicide and the letter was the one thing of meaning left on his body. When Connor’s parents want answers and stories about the friendship between Evan and Connor, Evan lies to comfort them and gain attention. Will Evan come clean and tell the truth?

(H, B, LLL, V, MM):
Dominant Worldview and Other Worldview Content/Elements:
Humanist, godless worldview provides no resolution and no answers about questions of concerning life, death, tragedy, and meaning/purpose, but there are some positive moral, pro-family elements
Foul Language:
23 obscenities (including two “f” words) and six profanities (including the use of Jesus as a curse word)
Violence:
Boy falls from a tree, and a suicide occurs
Sex:
No sex scenes or sexual immorality, but there is some kissing
Nudity:
No nudity
Alcohol Use:
No alcohol use
Smoking and/or Drug Use and Abuse:
No smoking or illegal drugs, but some prescription anti-depressant drugs are used and mentioned; and,
Miscellaneous Immorality:
Strong miscellaneous immorality where lying is a major part of the plot, but there are negative repercussions.

DEAR EVAN HANSEN is a musical drama about a high school student with social anxiety disorder who finds a connection with a married couple grieving the loss of their son. Based on the Tony-winning play, DEAR EVAN HANSEN has some moral elements to it, but it’s overwhelmed by a humanist worldview and contains foul language.

Evan Hansen suffers from social anxiety and depression. He doesn’t seem to fit in to his high school. When he breaks his arm, his mother gives him a sharpie and tells him to ask other kids to sign the cast. At the request of his therapist, every day Evan writes a letter to himself about what he’s done that day and how he feels about it.

He writes a letter about the girl he likes, Zoe. When he’s in line to print the letter on the school printer, he sees Zoe’s brother, Connor. Connor says he’ll sign Evan’s cast, but right after that he sees that Evan has written about his sister, so he steals the letter. The next day Evan comes to school and is called into the principal’s office. Connor’s mother and stepfather are there, and they tell Evan that Connor has committed suicide. The only thing they found on Connor was Evan’s letter. This leads them to believe that Connor wrote the letter to Evan and was Evan’s only friend. Of course, this isn’t true. In reality, Connor was a bully to Evan. However, Evan feels he can’t let the parents down since they just lost their son. Also, the news about the letter brings lots of attention to Evan.

Going along with the lie that Connor and Evan were friends, Evan starts telling stories about Connor. Connor’s whole family begins to accept him and bring him into their family. Even Zoe starts to like Evan and even wants to date him.

Now the question is, has the lie become to misleading and will it hurt people deeply? How can Evan come clean?

DEAR EVAN HANSEN is a well-produced musical drama. It has some excellent singing, and the acting is really good. Also, the characters seem well defined. Overall, the movie feels much like a musical, but the story doesn’t have a clear resolution at the end.

DEAR EVAN HANSEN has a humanist worldview and requires extreme caution due to Connor’s suicide and the lie that’s the premise of the movie. DEAR EVAN HANSEN has some positive notes about families learning to come together. The movie shows a young man learning confidence and how to interact with other people. Though this is the case, there is no redemption. Thus, eventually, the movie offers no solution to the world’s negativity, and viewers are left feeling purposeless. DEAR EVAN HANSEN also contains excessive foul language. So, although Evan does have to admit the lie and feel the repercussions of that, MOVIEGUIDE® must advise extreme caution.