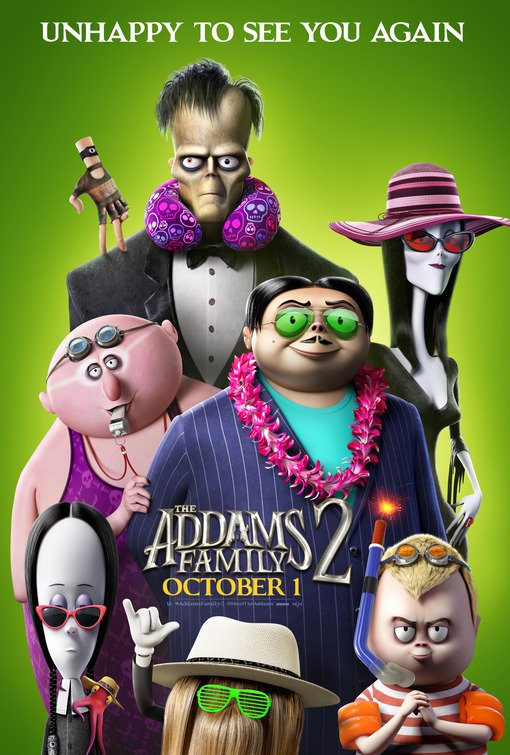 THE ADDAMS FAMILY 2 shows the Addams family taking a cross-country road trip to bond, after Wednesday’s school science fair doesn’t go as she hoped. Before they leave, however, a lawyer comes to their door. He insists there was a mix-up at the hospital, and Wednesday might not be an Addams. If that’s true, the family’s whole dynamic will change! Despite the looming threat, the Addams continue their travels, but their efforts to bond aren’t without their own road bumps.

THE ADDAMS FAMILY 2 has high stakes, funny characters and engaging plot twists. However, it has a strong occult worldview where the characters rely on darkness and occultism to motivate their actions. For example, they chant spells, play with voodoo dolls and mistake physical harm for love. There’s also a humanist villain driven by science and greed to achieve success. This negative content is slightly mitigated by some strong moral elements about family togetherness, forgiveness and getting engaged to be married. Despite a redemptive ending, the dark humor, occultism and strong violence in THE ADDAMS FAMILY 2 are an excessive, unacceptable mixture.

(OO, BB, C, H, L, VV, S, N, A, MM):
Dominant Worldview and Other Worldview Content/Elements:
Strong occult worldview where characters rely heavily on darkness and occultism to motivate their actions (including people chant spells, play with voodoo dolls and mistake physical harm for love), slightly mitigated by strong moral elements about family togetherness and getting engaged to be married, with redemptive elements of forgiveness, plus a humanist villain is driven by science and greed to achieve success
Foul Language:
One OMG, Burping, man makes a refences to his private parts when falling down a flight of stairs, man mentions he’s going to use the bathroom in the ocean, man appears on a toilet
Violence:
Strong animated violence includes an explosion occurs during a science fair, and a character catches fire, sister breaks the neck of her brother using a voodoo doll, sister smothers her brother with a pillow, references to witches being burned at the stake, child falls into Niagara Falls while the rest of his family voluntarily falls in barrels into the water, a mention of putting leeches into someone’s underwear, boy gets a wedgy, a mention of de-capitating a barber shop quartet, juggling babies in a nursery, girl allows two guys to get struck by lightning, lion accidentally eats and then vomits up Cousin It, boy blows up Grand Canyon with dynamite, girl references the Dahmer family
Sex:
Married couple kisses, sexual innuendos exchanged by a married couple, and mad scientists wants to change humans into animals, and there’s some lightly implied bestiality in that subplot
Nudity:
Upper male nudity when female and male characters appear in swimsuits, man appears on toilet, but no private parts are shown
Alcohol Use:
Character has a martini and another asks for a bloody Mary, and there’s one scene inside a bar with multiple drinks depicted
Smoking and/or Drug Use and Abuse:
No smoking or drugs; and,
Miscellaneous Immorality:
Very dysfunctional family portrayals, a mad scientist uses animal DNA to alter humans, and lying.

THE ADDAMS FAMILY 2 opens at a school science fair. Wednesday Addams looks at her peers with disgust as they showcase their various projects, confident she will win. At the end of the fair, the teachers announce that everyone wins the fair, just for participating. Wednesday is indignant since her family came to the fair to support her; so, her father, Gomez Addams, hatches a plan for family bonding – a cross-country road trip.

Right before the family leaves, a lawyer comes to their front door, inquiring about Wednesday because, apparently, the day of her birth there was a switch up of babies at the hospital. Could Wednesday belong to another family? After starting on the road, the Addams arrive at Niagara Falls. They evade the lawyer, who’s followed them on their family trip, by plummeting over the Falls in barrels.

Next, the family travels to Sleepy Hollow where Wednesday overhears there’s a possibility that she’s not an Addams. After Sleepy Hollow, the Addams go to Miami, where they pick up Cousin It and travel to San Antonio, Texas. When they arrive, the lawyer is hot on their trail. To camouflage Wednesday, Gomez puts her in a beauty pageant for girls her age. Certainly, the lawyer won’t recognize her now, right?

At the Grand Canyon in Arizona, the family camps out for the night, and Wednesday catches the looming lawyer spying on the family. After capturing the lawyer, Wednesday learns he’s working for a man who was at her science fair and is convinced Wednesday is his and his wife’s child. As a result, Wednesday conducts her own DNA test and unearths that he’s right, she’s not actually an Addams. So, Wednesday and Lurch, the family butler, continue onto Death Valley, Calif., without the rest of the Addams family.

Gomez, Morticia and the rest of the family realize Wednesday is gone. They set out to find her, but will they be successful?

THE ADDAMS FAMILY 2 does a great job explaining on screen actions, without treating the viewers like they need to be spoon-fed. For parents, the movie might be a bit predictable, but might be surprised at some of the twists and turns in the plot. The characters are spot-on animated versions of the previous portrayed characters in the 1990s live-action movies and the original comics drawn by Charles Addams, the creator. THE ADDAMS FAMILY 2 has engaging stakes and some modern music that add to its modernity.

That said, ADDAMS FAMILY 2 has a strong occult worldview where characters rely heavily on darkness and occultism to motivate their actions, including chanting spells, playing with voodoo dolls and physical harm, which gets portrayed as a means for love. There’s also a villain with humanist characteristics because he’s driven by “science” and greed to achieve success. This negative content is slightly mitigated by some strong moral elements about family togetherness and one redemptive line about forgiveness. There are also a few comical scenes about a marriage engagement, which stresses pro-family values. Ultimately, though, despite the movie’s lightly redemptive ending, the dark humor, occultism, heavy animated violence, and miscellaneous immorality in THE ADDAMS FAMILY 2 are an excessive, unacceptable mixture.