GOD’S NOT DEAD: WE THE PEOPLE

"Freedom Is Not Free" 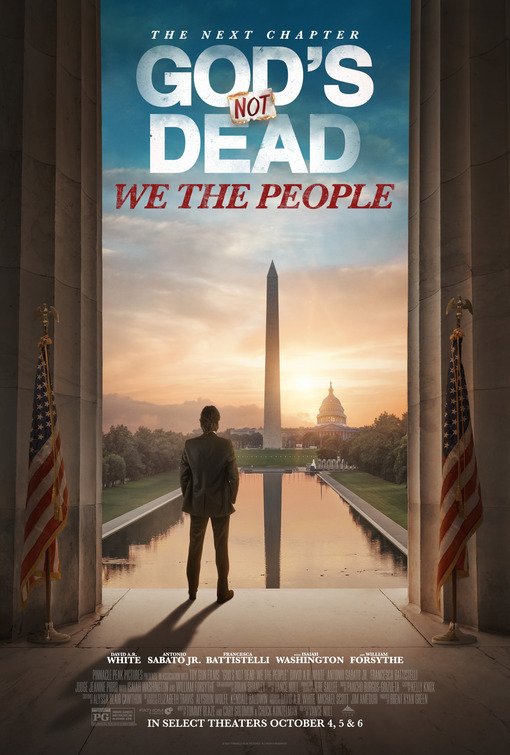 (CCC, BBB, PPP, ACACAC, V):
Dominant Worldview and Other Worldview Content/Elements:
Very strong Christian, biblical, moral, pro-American, patriotic worldview champions liberty, how faith and the Bible are engrained in much of the history of America, to overcome things like slavery and inequality, many Christian elements like praying, reading Scripture and church, a strong patriotic message about honoring those who have sacrificed to uphold the constitutional rights of the people in the face of tyranny, plus messages favoring homeschooling and faith-based education and very strong opposition to government tyranny
Foul Language:
No foul language, but a joke compares Washington, D.C. to Hell
Violence:
A woman gets in a car accident (nothing graphic), later the woman is shown with some bandages and injuries and in a coma, and there are several conversations about death
Sex:
No sex
Nudity:
No nudity
Alcohol Use:
No alcohol use
Smoking and/or Drug Use and Abuse:
No smoking or drugs; and,
Miscellaneous Immorality:
Nothing else objectionable.

GOD’S NOT DEAD: WE THE PEOPLE follows a pastor and some of the home schooling parents in the group his church sponsors as they fight the Marxist, politically correct government for the right to homeschool children. GOD’S NOT DEAD: WE THE PEOPLE is a strong patriotic movie about the Christian roots of the United States and its constitution and the importance for Americans to fight for their freedoms, with no objectionable content.

The movie opens as the McKinnon family in Arkansas prepares for the morning of a homeschooling co-op. A portion of the co-op includes theology and reading with the Rev. Dave with a group of children from his church, St. Judes, and the younger of the two McKinnon children.

However, during the Rev. Dave’s lesson on the Great Flood in Genesis, a government official conducts a surprise inspection of the learning environment in the McKinnon’s home and ends up writing the children’s parents a court summons, claiming their schooling is insufficiently politically correct.

At first, the Rev, Dave is skeptical about fighting the government and proposes changing the homeschooling curriculum to more align with what the leftists in the United States Dept. of Education want in schools to brainwash children. However, the parents of the co-op and Pastor Dave agree to take a stand for their constitutional rights after Dave recalls a conversation about liberty with an old friend from Africa, the late Rev. Jude.

The McKinnons, the Rev. Dave, a missionary who just got back to America from Communist China, and a widowed mother named Taylor Hays all head to Washington D.C. to plead their case. Upon arriving, Dave meets with one of the few Christian congressmen who helps prepare him for the coming battle.

Despite impassioned arguments about why a faith-based education reflects the faith and the freedoms upon which America is founded, the power hungry chairman is unmoved. Taylor Hays even explains that the trauma her son faces from the passing of her father would make public school impossible for him. However, the chairman dismisses every point.

After almost a week in Congress, and an all but closed case that would fine the families involved in the homeschool co-op, all hope seems to be lost. Against all odds, will Dave and the homeschooling parents successfully defend their faith and liberty?

WE THE PEOPLE is a strongly pro-patriotic movie about the Christian roots of the United States and its constitution and the importance for Americans to fight for their freedoms. WE THE PEOPLE has some expository moments, but they’re augmented by its moral and faith-based content, emphasizing God’s word, pro-liberty themes, standing up to tyranny, and honoring those who have served to hold onto America’s freedom. MOVIEGUIDE® encourages parents to watch WE THE PEOPLE with their children.

Watch GOD’S NOT DEAD: WE THE PEOPLE: