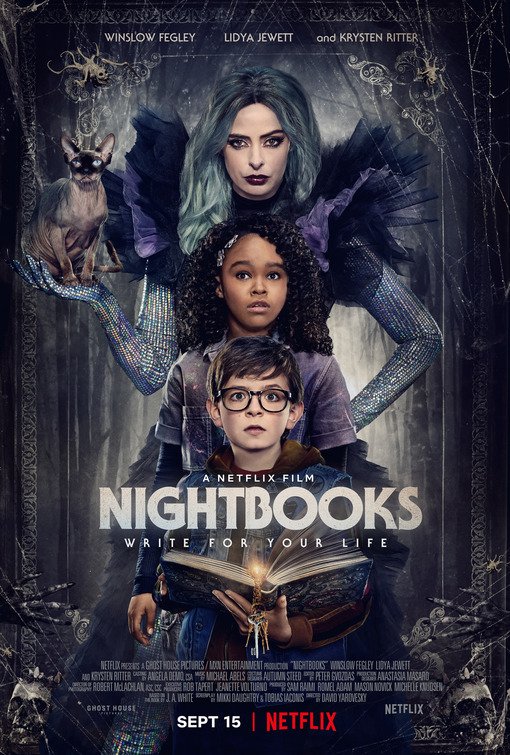 NIGHTBOOKS is a scary adventure fantasy on Netflix about a misfit boy, Alex, who’s obsessed with writing scary stories. Feeling alone and worthless after he overhears his parents tag him as “weird,” he sets out to destroy all his stories. On the way, an evil witch captures him and forces hm to tell stories to stay alive. Alex befriends the witch’s servant and her violent spy cat. They team up to escape. When their plans are foiled, they realize they have awakened an even bigger, more evil witch.

NIGHTBOOKS is a captivating, magical adventure. The imagery, creative fantasy and appealing performances will enthrall many viewers. Alex is a wonderful child with a heart of gold. Ultimately, the real key to escape for Alex and Yasmin is Alex’s belief in friendship, hope and happy endings. The movie also has a positive message promoting kindness in the face of cruelty. That said, NIGHTBOOKS contains some dark elements of kidnapping, murder and torture in dialogue, along with really scary images of witches, demons and dead people. So, MOVIEGUIDE® advises strong or extreme caution, especially for children.

(CC, BB, O, VV, M):
Dominant Worldview and Other Worldview Content/Elements:
Strong redemptive Christian, moral worldview, where main character risks his life to save his friends, promotes hope, love of friends and belief in happy endings over fear, sadness, pain, and evil, with a clear distinction between good and evil where evil is destroyed by goodness and love, plus some occult content where the villain is an evil witch who has two pentagrams in the her house
Foul Language:
No foul language
Violence:
Scary images of witches, demons, spiders, scary unicorns, graveyard of dolls, dialogue where the witch threw children into fire, and her servant had to clean it up afterwards, death threats to children, kidnapping, a witch holds children in the air and hits them, and a cat is violent
Sex:
No sex
Nudity:
No nudity
Alcohol Use:
No alcohol use
Smoking and/or Drug Use and Abuse:
No smoking or drugs; and,
Miscellaneous Immorality:
Evil witch kidnaps children.

NIGHTBOOKS is a uniquely clever fantasy horror movie on Netflix about a misfit young boy named Alex who’s obsessed with writing scary stories. Alex is captured by an evil witch, Natacha. The only way he can stay alive is to tell Natacha scary stories every day. He must find a way to escape before his stories run out. Alex is a kind and loyal boy who sacrifices himself for others, even when it puts him in danger. He loves happy endings where love and friendship triumph. However, NIGHTBOOKS has scary images of monsters, witches, and demons throughout which may terrify children. So, extreme caution is recommended.

One day Alex overhears his parents talking about him. They think his obsession with scary stories makes him a weird outcast. He runs out the door to burn his stories in the basement boiler. Before he can destroy all of his stories, he’s lured into a dark realm with a scary movie and a piece of pumpkin pie. He passes out.

Alex awakens in an antique designed apartment to discover he’s been captured by the evil witch, Natacha. Natacha threatens to kill him if he’s not useful to her. Right before she zaps him, he assures her he can tell her good horror stories. She agrees to let him live as long as he tells her a scary story every night.

Alex thinks he’s alone until he runs into Natacha’s servant, Yasmin, another child imprisoned in the apartment. The two are spied on by a caustic cat named Lenore. Yasmin is cold and distant. She firmly asserts that there are no happy endings, and there is no escape.

Alex continues to make attempts to befriend Yasmin and the angry cat. The attempts fall flat until Alex puts himself in danger to save the lives of Yasmin and the feline. A still doubtful Yasmin is convinced the two prisoners are better off taking care of themselves. Alex strongly asserts that as long as they stay together they can escape.

Alex and Yasmin concoct a plan to create a tincture to make the witch fall into a deep sleep so they can steal the key to the exit. When their plan fails, they are led to an even scarier, more evil witch: the witch out of Hansel and Gretel. The real key to escape may be Alex’s belief in friendship, hope and happy endings. However, is the darkness too great and the fear too strong in the witch’s lair for him to keep believing?

NIGHTBOOKS is a brilliant magical adventure that may remind viewers of beloved children’s classics. The imagery, creative fantasy and captivating performances will enthrall many. Alex is a wonderful boy with a heart of gold. However, because he’s been bullied and deemed as “weird,” he can’t see his own value. His newfound friend, Yasmin, points out that his strong character and “weirdness” are his gift. The movie includes some positive commentary on the falsities of bullying, the importance and strength of kindness in the face of cruelty, and the belief in overcoming insurmountable evil to find the happy ending. That said, NIGHTBOOKS contains some dark elements of kidnapping, murder and torture in dialogue, along with really scary images of witches, demons and dead people. So, MOVIEGUIDE® advises strong or extreme caution, especially for children and other sensitive viewers.