CONFESSIONS OF AN INVISIBLE GIRL 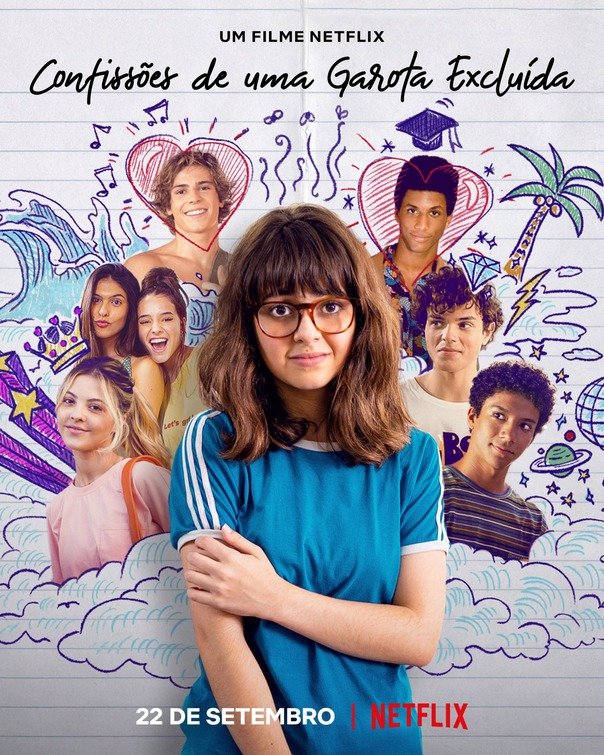 CONFESSIONS OF AN INVISIBLE GIRL is a Brazilian coming-of-age story on Netflix. The story is about an awkward young teenage girl who wants to be liked. Tete’s life is uprooted when her family must move in with her grandparents, and she changes schools. At her new school, Tete becomes an outcast but makes a few friends who are also outcasts. Over time, she learns not only to embrace change but also to make an effort to be less awkward and more confident. However, a conflict with a mean girl may end up with Tete and her friends being expelled.

CONFESSIONS OF AN INVISIBLE GIRL is well made. The story focuses on awkward teenage years and successfully demonstrates this with good music, camera work and acting. However, the movie’s content is abhorrent. For example, it has a strong, abhorrent Romantic worldview. Though only rated PG, the movie sexualizes its teenage characters, supports homosexual relationships and contains partial rear nudity. CONFESSIONS OF AN INVISIBLE GIRL also promotes astrology. Consequently, media-wise viewers and people of faith will want to stay away from this Brazilian import.

(RoRo, HoHo, B, FRFR, L, V, S, NN, MM):
Dominant Worldview and Other Worldview Content/Elements:
Strong Romantic worldview where title character makes her decisions throughout the entire movie based on how she feels with no mention of God being the guiding force of goodness and this worldview is further exacerbated by the movie’s promotion of teenage sexuality, which includes the title character’s lesbian friend is encouraged to be whatever she wants to be, mitigated by some solid, positive moral, pro-family themes such as placing a value on familial love, standing up to bullies and caring about others, but everything in the movie ultimately boils down to emotions, plus there’s a heavy amount of astrology referenced and believed in by the title character and three of her friends
Foul Language:
No obscenities but there are four OMG exclamatory profanities
Violence:
A school fight breaks out between title character and another girl
Sex:
No depicted sex scenes, but movie promotes premarital sex, over sexualizing teenagers and homosexual relationships (the title character’s female friend identifies as a lesbian)
Nudity:
Partial rear female nudity in some bathing suits, images of upper male nudity and girls shown wearing bikini tops or bras
Alcohol Use:
No alcohol use
Smoking and/or Drug Use and Abuse:
No smoking or drugs;
Miscellaneous Immorality:
Many instances of bullying in title character’s school life and home life, although one girl’s bullying is rebuked, the emotional/verbal abuse from title character’s grandmother is never called into question.

CONFESSIONS OF AN INVISIBLE GIRL is a Brazilian coming-of-age story on Netflix that demonstrates what being an awkward teenage girl is like by focusing on an awkward teenage girl who has a physical problem of sweating whenever she’s nervous. CONFESSIONS OF AN INVISIBLE GIRL is well made and has some positive moral, pro-family elements, but it has a strong, abhorrent Romantic worldview that sexualizes teenagers and promotes homosexuality and astrology.

The story follows Tete, a teenager living in Brazil who encounters some of the most awkward circumstances in her life. She suffers from a disorder which causes her to sweat a lot when she is nervous which makes it difficult for her to make friends or even connect with other people. However, her troubles are far from over. Her family is forced to move in with her grandparents when her father’s is laid off at work. While there, her grandfather tries too hard to spoil her, and her grandmother is extremely judgmental about her life choices.

Despite her best efforts, Tete becomes an outcast at her new school, but this time she manages to make a few new friends. Her friends include super nerd Davi, the flamboyant Zeca, a former popular girl named Samantha, and a heartthrob named Errick. Tete almost instantly falls for Errick, bringing a conflict between her and mean girl Valentina, who goes out of her way to make Tete’s life more miserable.

Over time, however, with the support of her new friends and family, Tete slowly starts to build her confidence and tries to actively improve her life. However, just as things start looking up for Tete, things change for the worse. Her dad gets a new job, and they might have to move again. She also has some awkward romantic encounters both with Errick and Davi’s brother, Dudu. The ultimate emotional hurdle is when during a class presentation she accidently shows a video humiliating Valentina. Tete didn’t take the video, she has to find out who took the video to keep herself and her friends from getting expelled.

From a production and entertainment standpoint, CONFESSIONS OF AN INVISIBLE GIRL is well made. The visuals and audio are on point. The story itself has a natural, raw emotional feel to it that makes for a flowing narrative. The story focuses on awkward teenage years and successfully demonstrates this with good music, camera work and acting.

However, CONFESSIONS OF AN INVISIBLE GIRL has a strong Romantic, godless, abhorrent worldview. All the characters do what they feel is right rather than appealing to God or considering what’s the right thing to do. Sadly, though only rated PG, the movie also promotes the “sexual revolution” in many ways. For example, it promotes premarital sex, the sexualizing of teenagers and homosexual relationships. Despite some pro-family elements and anti-bullying sentiments, CONFESSIONS OF AN INVISIBLE GIRL also promotes astrology. Consequently, media-wise viewers and people of faith will want to stay away from this Brazilian import.