THERE’S SOMEONE INSIDE YOUR HOUSE 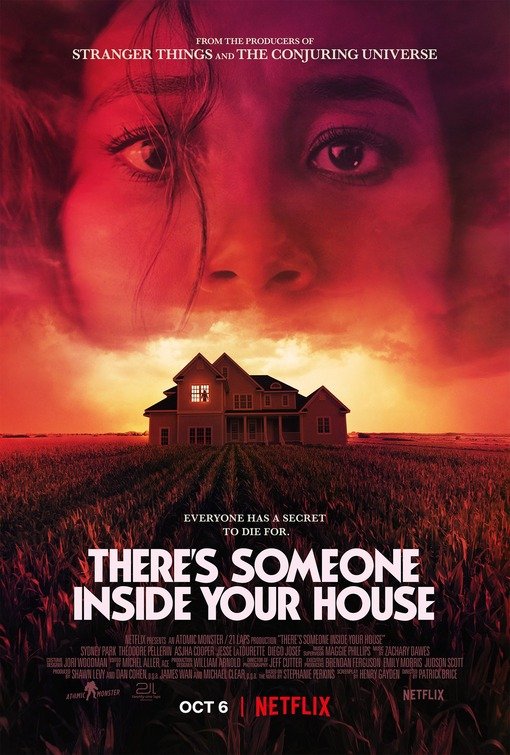 THERE’S SOMEONE INSIDE YOUR HOUSE is a mad slasher movie on Netflix. The story focuses on Makani Young, a high school senior of mixed Hawaiian and black ancestry. Her divorced parents moved her to rural Nebraska to live with her black grandmother when Makani got into some unknown serious trouble back in Hawaii. A politically motivated masked killer with some awful grudges starts to target bullies and other hated groups of people in Makani’s new school. Eventually, Makani herself is targeted for hazing someone in Hawaii. However, she survives and teams up with several other survivors to stop the killer once and for all.

THERE’S SOMEONE INSIDE YOUR HOUSE has a couple interesting twists. For example, the killer’s mask is made to look like each of his victims. Otherwise, however, the story is pretty much paint by numbers. The movie’s least interesting part is its politically correct, abhorrent Marxist worldview. THERE’S SOMEONE INSIDE YOUR HOUSE embraces Marxist Critical Race Theory with Anti-American, anti-capitalist, pro-homosexual content. It also contains lots of strong foul language, gruesome violence, some teenage sexuality, and teenage substance abuse.

(RoRoRo, PCPCPC, CoCoCo, APAPAP, AcapAcapAcap, HoHoHo, AbAb, C, B, LLL, VVV, SS, N, M):
Dominant Worldview and Other Worldview Content/Elements:
Very strong Romantic, politically correct leftist worldview promotes Marxist Critical Race Theory with some very strong Anti-American, anti-capitalist elements (there’s mention of the “evil” top one percent, the richest man in town is taking advantage of the small farmers and there’s a spoiled rich boy), very strong pro-LGBT elements, one victim is a Christian conservative who turns out to be a mean racist and is murdered in church, plus some light Christian, redemptive, moral elements
Foul Language:
At least 71 obscenities (including many “f” words), four GD profanities, one Jesus profanity, seven OMG exclamatory profanities, and two or so obscene gestures
Violence:
Extreme, sometimes gruesome, violence and intense strong violence, includes throats slit, people stabbed, killer shoves a sword through one person’s head, teenager is tased and pills shoved down his throat before his throat is slit, woman’s bloody body dragged across church floor and hanged in the church, teenage girl shoved into bonfire followed by a couple images of her scarred face, killer starts a fire in a large corn maze during a harvest festival, and people scream as they’re trapped and killed by fire, car crashes through fire and catches on fire, at which point teenagers get out to confront killer
Sex:
Partially depicted and implied teenage fornication in a car before the couple’s interrupted (they keep their clothes on while girl sits on top of boy), one or two crude sexual comments, one male character is homosexual, and one female character has a short male haircut and is portrayed and described as “non-binary”
Nudity:
Upper male nudity, but no sexual nudity
Alcohol Use:
Teenage alcohol use
Smoking and/or Drug Use and Abuse:
Brief smoking and teenagers smoke marijuana and take pills (killer forces pills down on victim’s throat after he tasers them in one scene); and,
Miscellaneous Immorality:
Bullying but rebuked, though the killer rebukes bullies by killing them.

THERE’S SOMEONE INSIDE YOUR HOUSE is a mad slasher movie on Netflix about a politically correct masked killer stalking high school bullies and other hated groups in rural Nebraska. Starring a host of young relative newcomers, THERE’S SOMEONE INSIDE YOUR HOUSE is only moderately interesting and contains an abhorrent Marxist worldview attacking traditional values and American society, with lots of strong foul language, gruesome violence, some teenage substance abuse, and a sprinkling of teenage sex involving the movie’s heroine and her boyfriend.

The story focuses on Makani Young, a high school senior of mixed Hawaiian and black ancestry. Her divorced parents moved her to Nebraska to live with her black grandmother when Makani got into some unknown serious trouble back in Hawaii. She had a summer romance with a white boy outcast named Ollie, but they broke up for some reason.

One night, a masked killer invades the home of a football player and brutally stabs him to death. At the same time, the killer releases a video of the jock bullying a homosexual boy playing on the football squad. The killer’s next victim is the pretty conservative student body president who’s revealed to be a racist.

Makani and her friends at school, including a girl who thinks she’s “non-binary,” wonder who the killer could be. Suspicion centers on Ollie, with whom Makani has gotten back together, but Makani is certain he couldn’t possibly be the killer. Then, the killer sneaks into a party and kills one of Makani’s friends, a boy who supplies marijuana and pills to the students and who has a crush on her best friend.

Eventually, Makani is targeted when it’s revealed she got into a fight in Hawaii with a fellow student and pushed her into a bonfire, scarring the girl’s face. However, Makani survives the attack when her friends scare the killer away.

Finally, when they discover the killer is about to attack the whole town during a harvest festival at the traditional corn maze exhibit, Makani and her friends team together to stop him.

THERE’S SOMEONE INSIDE YOUR HOUSE has a couple interesting twists. The killer’s mask is different each time because he’s molded it to look like each intended victim. One of the movie’s funniest lines is by the killer who, upon being unmasked, angrily tells the heroine and her friends, “Do you know how long it took me to make those masks?!” Also, every intended victim has an unflattering secret about their past. However, the rest of the story is pretty much paint by numbers and uninteresting.

The least interesting part of the movie, in fact, is its politically correct, Marxist worldview. Thus, the killer attacks a popular football player student who bullied a homosexual player on his team, the student body’s conservative president who’s revealed to be a racist, and the town’s richest man who’s preying on local farmers and stealing their land. The movie seems to be promoting Marxist Critical Race Theory. THERE’S SOMEONE INSIDE YOUR HOUSE also contains lots of strong foul language, gruesome violence, some teenage sexuality, and teenage substance abuse.