EAT, DRINK AND BE MARRIED

"True Love Is Worth Fighting For" 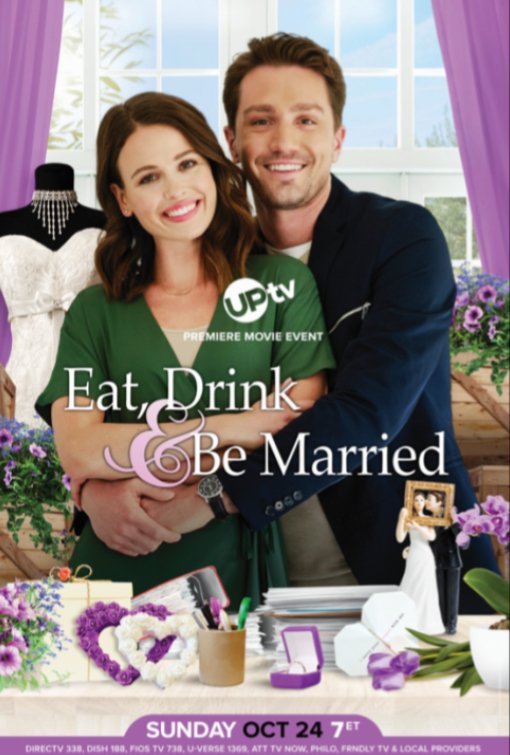 EAT, DRINK AND BE MARRIED is a romantic drama airing on UPtv. Billie runs a unique charity in the building her father used to own. The charity, Dream Day Donations, arranges donations of leftover flowers, decorations, food, and things from fancy weddings to worthy people and groups, such as nursing homes. Charlie, a handsome real estate salesman, gets upset when Billie says something that convinces Charlie’s brother, Max, to call off his wedding with Jess. Charlie makes a deal with Billie to get her to help him patch up Max’s broken engagement with his bride-to-be. Complications ensue.

EAT, DRINK AND BE MARRIED has its share of charming moments. Also, the characters are appealing, and the dialogue moves things along nicely. However, a few editing transitions are a little clunky. That said, the movie has moral, redemptive elements and themes. For example, it celebrates love, marriage, family, kindness, charity, and forgiveness. Sadly, though, the strong positive content in EAT, DRINK AND BE MARRIED is marred by references to Zen Buddhism and yoga in two scenes. So, MOVIEGUIDE® advises caution for older children and other viewers.

(Pa, BB, C, FR, L, A, M):
Dominant Worldview and Other Worldview Content/Elements:
Light mixed pagan worldview with strong moral elements and themes celebrating love, marriage, family, and charity and including older married man makes a comment that , plus a redemptive promotion of forgiveness and reconciliation, marred by two scenes featuring religious yoga references that include the word Zen in one scene as in Zen Buddhism and a mantra about “beauty and peace” during yoga routine in the one scene, and woman makes a visual reference to the Buddhist lotus position
Foul Language:
One light exclamatory OMG profanity
Violence:
No violence
Sex:
No sex scenes or sexual immorality (two romantic kisses, one at a wedding)
Nudity:
No nudity
Alcohol Use:
Brief alcohol use, and two or so visual references to alcohol use
Smoking and/or Drug Use and Abuse:
No smoking or drugs; and,
Miscellaneous Immorality:
Lead male character has trouble carrying out a promise to a woman, and he doesn’t tell her about it, but he finds a solution to fix the problem.

EAT, DRINK AND BE MARRIED is a romance airing on UPtv about a real estate salesman who gets help from the beautiful director of a charity designed to spread the joys of weddings to help him patch up the broken engagement of his younger brother and his bride-to-be. EAT, DRINK AND BE MARRIED has charming moments and appealing characters, plus some positive moral, redemptive elements celebrating love, marriage, family, kindness, charity, and forgiveness, but it’s marred by two scenes referring to Buddhism and yoga.

The girl, Billie Davis, runs a unique charity in the building her grandfather and father used to own. The charity, Dream Day Donations, arranges donations of leftover flowers, decorations, food, and things from fancy weddings to needy people and places, like nursing homes.

One morning, Billie gets a notice from her landlords that they’re selling the building, so she has 14 days to vacate the premises. At her yoga class that morning, she attracts the attention of a handsome young real estate salesman named Charlie. Later in the day, she just happens to consult with Charlie’s younger brother, Max, and his beautiful bride, Jess, about donating the leftovers from their upcoming wedding, to defray the costs. Max and Jess start to bicker about their wedding plans. Billie tries to fix the situation, but she just makes things worse, especially when she tells them about her decision three years ago to break up with her own fiancé. As a result, Max and Jess call off the wedding.

When he hears about his brother calling off the wedding, Charlie angrily goes to Dream Day Donations to complain. Naturally, he’s surprised to see that the woman responsible for the situation is the same beautiful woman who caught his eye at the yoga class. Charlie tells Billie she must help him fix the situation and get Max and Jess back together. He assures her they were made for each other and truly love one another. Billie tells Charlie she doesn’t have the time to help him because she has to move in 14 days. However, Charlie offers to find a buyer for the building who will let Billie keep leasing her office there. Billie agrees, but only if Charlie also shows up each day for the next week to help her run her charity. It’s a deal, he says.

Billie and Charlie put their heads together and think of ways to get Max and Jess back together. They try some solutions, but they don’t work. Making matters worse, Charlie’s Uncle Edward, who owns his real estate company, decides he’d rather tear down building where Billie works and build condos. Charlie can’t bring himself to tell Billie about that, especially when he learns how much the building means to her because of its connection to her family.

With love on the line for both Charlie and his brother, not to mention Billie and Jess, the phrase happily ever after is looking out of reach.

EAT, DRINK AND BE MARRIED has its share of charming moments. Also, the characters are appealing, and the dialogue moves things along rather nicely. However, some of the editing transitions are a little clunky.

That said, the movie has strong moral elements and themes. For example, it celebrates love, marriage, family, kindness, and charity. It also has at least three redemptive scenes of forgiveness and reconciliation between Jess and Max, Billie and Charlie, and Charlie and his uncle. One of the movie’s best moments comes when Billie’s mother and father tell Jess and Max, “Marriage is tough, but real love is worth fighting for.”

Sadly, though, the positive content in EAT, DRINK AND BE MARRIED is marred by references to Zen Buddhism and yoga in two scenes. For example, in the yoga class in the beginning, Billie repeats a mantra, “Beauty around; peace within.” Consequently, MOVIEGUIDE® advises caution for older children and other viewers.

Watch EAT, DRINK AND BE MARRIED: