FATHER CHRISTMAS IS BACK 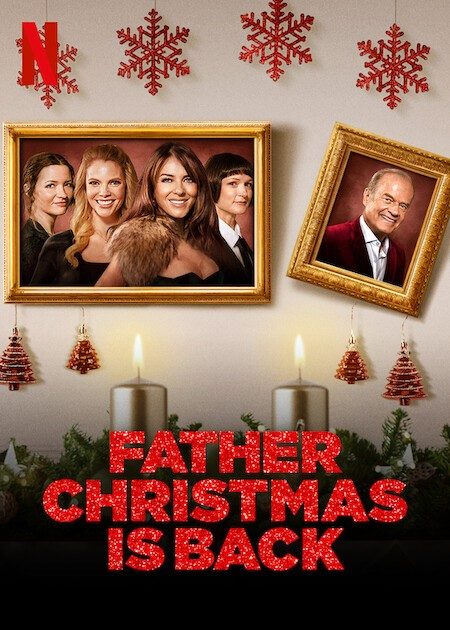 FATHER CHRISTMAS IS BACK is a British comedy on Netflix. Caroline Christmas prepares the perfect Christmas celebration for her three sisters, their mother and their extended family. However, when her estranged father arrives, personalities clash, and Caroline’s perfect Christmas turns into chaos. As Christmas approaches, more secrets about the Christmas family are uncovered. Can the Christmas’ band together and heal past wounds? Or, will their differences and secrets doom their holiday and their family?

FATHER CHRISTMAS IS BACK boasts acting talent like Kelsey Grammer and John Cleese, but the irreverent dialogue is unfunny and tiresome. Grammer is the one bright spot in the movie, because he plays a grandfather looking to heal past relationships. However, the rest of the acting is subpar, and the plot is convoluted. The movie has a positive theme of redemption and forgiveness, despite the family’s hatred for one another. However, this theme is overshadowed by constant alcohol abuse, implied sex, sexual innuendos, some homosexual content, and lots of foul language, including several strong profanities. Media-wise viewers and families will want to skip FATHER CHRISTMAS IS BACK altogether.

(PaPa, Ho, C, B, LL, V, SS, N, AAA, M):
Dominant Worldview and Other Worldview Content/Elements:
Strong pagan worldview where sexual promiscuity is not seen as bad, with brief homosexual elements (including one sister makes a comment about coming out as lesbian to the family every Christmas), and light Christian, moral elements promoting forgiveness and an illicit affair is shown to have negative consequences
Foul Language:
About 11 obscenities and 10 profanities (including Jesus and GD), plus cow manure is shown at a Christmas fair
Violence:
Light comic violence, and man punches another man in the face
Sex:
Implied sex throughout, although nothing graphic, the plot of the movie revolves around sex, and many of the jokes are about sex, mention of an affair, and some kissing between married couples and unmarried couples
Nudity:
One sister wears inappropriate clothing that shows cleavage, a woman’s back is scene briefly in the shower, several scenes include upper male nudity, a man is showed blindfolded and tied to a bed in only his underwear, and a woman dances in lingerie, but this is more comical than offensive
Alcohol Use:
Strong alcohol abuse throughout, frequent drunkenness and, when the family finally sees past their differences, it’s only because they go to a pub and get drunk
Smoking and/or Drug Use and Abuse:
No smoking or drugs; and,
Miscellaneous Immorality:
Characters lie and openly hate on another, but there are negative consequences to their actions.

FATHER CHRISTMAS IS BACK is a British comedy on Netflix starring Kelsey Grammer, Elizabeth Hurley and John Cleese.

The movie opens with Caroline Christmas and her husband, Peter, preparing to celebrate Christmas with her extended family. Caroline has a complete itinerary and is a perfectionist. The couple, who have two children named Henry and Daisy, live in a castle in the British countryside, making it the perfect place to celebrate the holidays.

However, when Caroline’s family starts to show up, her plans for a perfect Christmas are immediately challenged by her three sisters.

The three sisters and their mother arrive at Caroline’s home, but no one seems happy to be there. Their different personalities clash, and, from day one, Caroline questions whether or not she can pull off a Christmas with family.

Things start to slow down until Caroline’s estranged father, James, shows up with a girlfriend much younger than he is. James’ older brother, John, is with Caroline’s mother, Elizabeth. The odd family dynamic grows increasingly awkward, and one of the sisters leaves to stay at the pub instead of the house.

After the family continues to fight with each other, Christmas Eve arrives. As they scramble to celebrate the holidays, more and more secrets about each other are uncovered. Caroline tries to make the best of it. However, both her plans for the perfect holiday and the relationships in her extended family are at risk of ending.

Although FATHER CHRISTMAS IS BACK boasts acting talent like Kelsey Grammer, Elizabeth Hurley and John Cleese, the irreverent dialogue is unfunny and tiresome. Grammer is the one bright spot in the movie, because he plays a grandfather looking to heal past relationships. However, the rest of the acting is subpar, and the plot is convoluted. While there is a slight theme of redemption and forgiveness despite the family’s hatred for one another, this is overshadowed by constant alcohol abuse, implied sex and sexual innuendos, and lots of foul language, including some strong profanities. Media-wise viewers and families will want to skip FATHER CHRISTMAS IS BACK altogether.