"The Perils of Meeting a Self-Imposed Deadline" 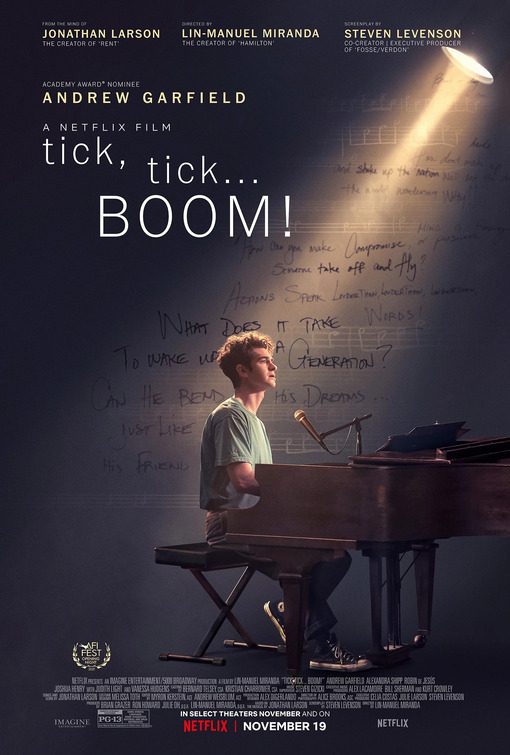 TICK, TICK. . . BOOM! follows the playwright Jonathan Larson as he tries to break into Broadway. Jonathan has a musical that he’s he has been writing for years. His passion is to get it made into a Broadway show. When he’s offered to do a workshop for the show, where producers and agents can come see the show played out, he’s excited. The one problem is he must still write the most important song in the entire show, the lead character’s song. Will Jonathan be able to accomplish this with the deadline he has and be able to get this show produced for Broadway?

Based on a true story, TICK, TICK. . . BOOM! is extremely well made and entertaining. This is Lin-Manuel Miranda’s directorial debut. It’s clear that he has a personal connection with the plotline. Andrew Garfield does a great acting job as an aspiring creative genius. Despite this, the movie has a secondary plotline about the homosexual AIDS epidemic ravaging the theater community in New York City. So, MOVIEGUIDE® advises extreme caution for viewing TICK, TICK. . . BOOM!

(Ro, HoHo, L, S, N, AA, DD, M)
Dominant Worldview and Other Worldview Content/Elements:
Romantic worldview of following one’s heart, homosexual content as character makes a plea for homosexual marriage, characters are HIV positive and are dying of AIDs,
Foul Language:
Five obscenities, one Jesus profanity, one light profanity
Violence:
No violence
Sex:
A dating couple starts to fornicate but then stops, plus some references to homosexuality and the AIDS epidemic
Nudity:
Upper male nudity
Alcohol Use:
Drinking and drunkenness Smoking and/or Drug Use and Abuses: Tobacco smoking, mentions of smoking marijuana and a mention of using other drugs; and,
Miscellaneous Immorality:
Mentions of racism and genocide.

TICK, TICK. . . BOOM! follows a playwriter trying to break into Broadway with a new musical, but the musical is missing a signature song. Based on a true story, TICK, TICK. . . BOOM! is extremely well made and entertaining throughout, but it contains brief foul language and a subplot about the AIDS epidemic ravaging the theater community in New York City.

Jonathan Larson has been working on a musical for years and years but hasn’t been able to find a producer for it. Finally, Jonathan has someone interested in doing a workshop for the musical, meaning inviting agents and producers to come and view the musical being performed, in an attempt to get the musical picked up for a run on Broadway or Off Broadway.

Jonathan could finally have his big break. Since he’s about to turn 30, Jonathan believes he needs to accomplish this now. There’s only one issue, however. Jonathan has one song left to write, the most important song, the main character’s song.

Will Jonathan be able to pull off writing this song in such a short timeframe? Will producers enjoy the play so much that it will finally premiere on Broadway?

TICK, TICK. . . BOOM! is very well made. The movie keeps moving along, with music interspersed throughout the story. The audience truly feels what it’s like to be a creative artist trying to achieve their big break into the entertainment industry and on Broadway. This is Lin-Manuel Miranda’s directorial debut. It’s clear he has a personal connection with the plotline of being a musical playwright who’s under a deadline. The movie has a secondary plotline of the AIDS pandemic ravaging the theater community in New York City. The main character’s best friends are being treated for AIDS. They make a plea for same-sex marriage and “gay rights.” These are clearly heavy themes. So, MOVIEGUIDE® advises extreme caution for viewing TICK, TICK. . . BOOM!