"Too Clunky, Too Dark and Too Profane" 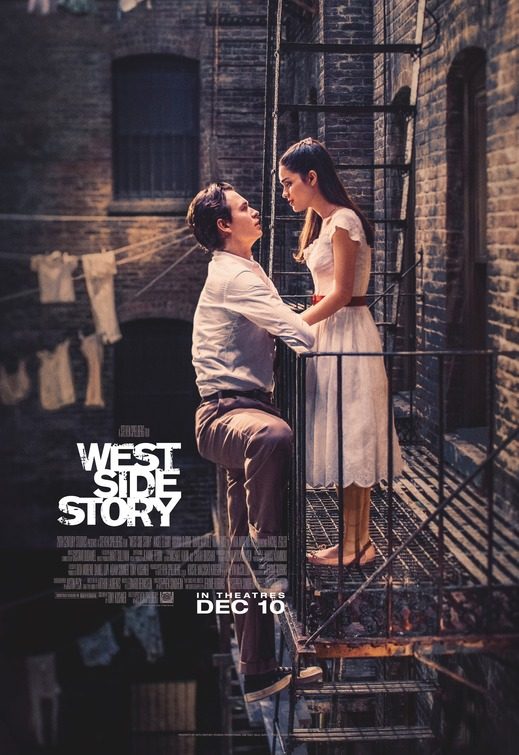 WEST SIDE STORY (2021) is Steven Spielberg’s remake of the famous movie and stage musical. Two street gangs in 1950s New York City, the Jets and the Sharks, are fighting for territory. The leaders of the two gangs, Riff and Bernardo, decide to have a big rumble to decide who gets the territory. Riff wants his friend, Tony, who just finished a one-year prison term for beating up someone, to join the fight. However, at a school dance, Tony falls in love with Bernardo’s sister, Maria. Maria asks Tony to stop the fight, but he fails. A terrible tragedy results.

The love story, music and dancing in this version of WEST SIDE STORY have their moments. However, they’re marred by clunky directing, muddled dialogue, and bad casting. The standout in the cast is Ansel Elgort, who plays Tony. He has great charisma and an excellent voice. WEST SIDE STORY has a light Christian, moral worldview. Eventually, love overcomes the racial animosity between the two gangs. The positive worldview in WEST SIDE STORY is marred by strong pagan, immoral behavior, including many strong, gratuitous profanities.

(C, B, PaPa, Ro, PC, Ho, Cap, P, AP, LL, VV, S, B, A, DD, M):
Dominant Worldview and Other Worldview Content/Elements:
Light Christian, moral worldview based on a tragic Shakespeare play about love bringing two rival gangs into peaceful coexistence (one major song is set inside am unoccupied church and there are references to praying, the Holy Trinity and Catholic crosses with Jesus), but it’s marred by strong pagan, immoral behavior and some Romantic notions, plus there’s at least some politically correct content involving one teenage character who’s a girl but looks like a transsexual male, unlike the original musical where she’s just a tomboy, and one character continues to run a drugstore after her husband died, and immigrant characters argue about the positive and negative effects of living in the United States
Foul Language:
10 obscenities, 10 strong profanities (eight GDs and two mentioning Jesus), two exclamatory OMG profanities
Violence:
Strong violence includes two teenage gangs fight in about three scenes, one scene shows them using weapons like bars and chains and two of the older teenage boys square off with knives and another boy on the sidelines accidentally shoves one of the boys into the knife of the other boy and then stabs to death the other boy still living, two older teenage boys punch each other until their faces are bloodied, older teenage boy tries to take gun away from his friend in a lengthy scene, but he’s ultimately unsuccessful after a lot of fighting over the gun, teenage girl’s brother slaps her once for going out with a white boy, one character is shot dead in the back, white teenage boys try to rape Puerto Rican girl in a drugstore after midnight until they are interrupted, and she lies to them in revenge, teenage boys make a mess of a police station during one lengthy song, and people point gun at other people a few times
Sex:
Implied fornication between the two leads, and two other unmarried characters are living together, plus one teenage character looks like a young man and seems to be a transsexual, and there’s some passionate kissing and dancing
Nudity:
Upper male nudity in one scene and some female cleavage, and female characters dance with a lot of twirling skirts above the knee
Alcohol Use:
Some references to alcohol and drinking beer in at least two scenes
Smoking and/or Drug Use and Abuse:
Brief tobacco smoking, plus two references to marijuana in two scenes; and,
Miscellaneous Immorality:
Teenage rebellion, juvenile delinquency, teenagers are cynical about America and society.

WEST SIDE STORY (2021) is Director Steven Spielberg’s remake of the famous movie and stage musical about two “star-crossed” teenage lovers caught between two rival gangs from different ethnic backgrounds in New York City in the late 1950s. The love story, music and dancing in this version of WEST SIDE STORY have their moments, but they’re marred by clunky storytelling and directing, muddled dialogue, bad casting and many unnecessary profanities.

The movie pretty much follows the storyline of the 1960 movie directed by Robert Wise, who directed THE SOUND OF MUSIC and many other beloved classics. Two street gangs in 1950s New York City, the Jets and the Sharks, are fighting for territory. The leaders of the two gangs, Riff and Bernardo, decide to have a big rumble to decide who gets the territory.

Riff wants his friend, Tony, who just finished a one-year prison term for beating up a rival gang member, to join the fight. However, at a school dance, Tony falls in love with Bernardo’s sister, Maria. Maria asks Tony to stop the fight, but he fails. This results in terrible tragedy.

The music of the original play will survive this misguided remake. Although there’s no way the remake could match the exhilarating opening of the 1960 movie, Spielberg’s opening here is less than thrilling. That said, the love story, music and dancing in this version of WEST SIDE STORY have their moments, especially whenever Ansel Elgort, who plays Tony, sings. Ansel is the one real standout in the cast. For example, one of the movie’s highlights is his version of “Something’s Coming,” which introduces his character. Of special note is Rita Moreno, who won Oscar for Best Supporting Actress for 1961 WEST SIDE STORY. The other cast members, however, aren’t as good as those who played in the 1961 movie. Sadly, some of the dialogue and some of the lyrics in some songs, especially the group songs, are muddied. Also, Spielberg has added a lot of untranslated Spanish dialogue to his movie, which is extremely annoying to those of us who don’t speak Spanish fluently. “En Los Estados Unidos, Señor Spielberg, hablemos Ingles!”

This version of WEST SIDE STORY has a light Christian, moral worldview. Like the original 1957 musical, love eventually overcomes the racial animosity between the two gangs. To push this message home, the movie contains a major song set inside the Cloisters museum & gardens with references to praying, the Holy Trinity, the Virgin Mary, and Catholic crosses with Jesus on them. Regrettably, the movie’s positive worldview is marred by strong pagan, immoral behavior, including too many strong profanities, which apparently were added to “modernize” the play. Also, in the 1961 movie, a girl wants to join the Jets. She’s depicted as a tomboy in that movie, but here, Spielberg and his screenwriter, Tony Kushner, have decided to make her look like an transsexual male.