"Too Pat and Too Many Obscenities" 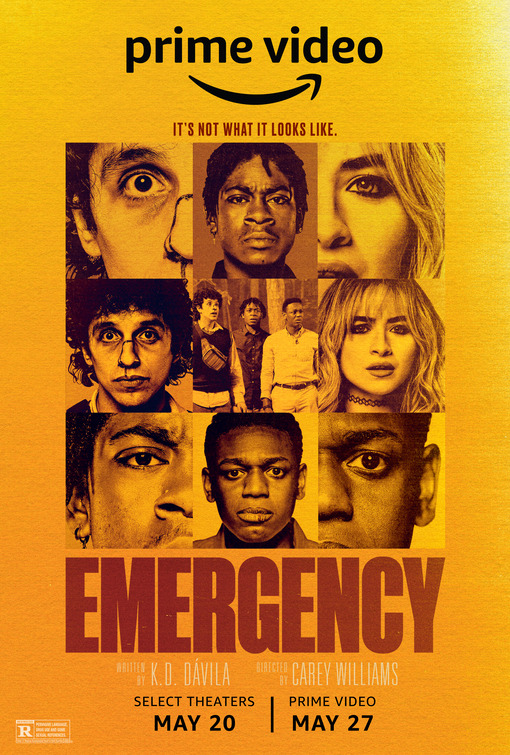 EMERGENCY is a tension-filled social drama sprinkled with comedy. Two black college students, Sean and Kunle, and their Hispanic roommate, Carlos, find a stoned, semi-conscious white girl, Emma, in their apartment. Instead of calling 9-1-1, they decide to take her to a hospital themselves, because they’re scared what the police might do to them. Meanwhile, Emma’s sister comes looking for her. She tracks Emma’s phone to Sean’s van. A chaotic, funny, intense chase ensues. Will Kunle, Sean and Carlos ever get Emma to the hospital without the cops getting involved?

EMERGENCY is engaging, suspenseful, dramatic, and often funny. As a social drama, the movie makes some good points about racial issues. However, the story’s plot is too pat and eventually leads to politically correct, leftist conclusions. Ultimately, the movie blames white people and police for bad situations or alleged racial conflicts that occur, such as the one created for this movie, and absolves “people of color.” EMERGENCY, sadly, has at least 200 obscenities (including many “f” words), six strong profanities, alcohol and drug abuse, and an off-color, lewd joke in one scene.

(RoRo, PCPC, APAP, B, C, LLL, VV, S, N, AA, DD, M):
Dominant Worldview and Other Worldview Content/Elements:
Strong Romantic, politically correct worldview accuses white people and police for causing alleged racial conflicts and alleged racism in America, but absolves “people of color” of any guilt in incidents that occur, with some moral, redemptive elements promoting helping people and forgiving others (except when police might legitimately have a reason for pointing a gun at someone or being careful when encountering potential criminal or potential dangerous activity)
Foul Language:
At least 201 obscenities (including many “f” words), two Jesus profanities, four GD profanities, three light profanities, multiple uses of the “n” word in first act of movie, and stoned character vomits several times
Violence:
Brief, lightly intense strong and light violence include stoned girl hits man’s nose and mouth with stick and nose bleeds profusely, guys chase two men and throw things at one of the men’s vehicle and break the right rear tail light, policeman points gun at man in van, policeman drags man out of car and forces him to lie face down on pavement, woman shives through crowd looking for her missing sister, police cars chase vehicle trying to get to emergency hospital, girl hits men
Sex:
A crude mostly visual reference to oral sex and college students are having several wild parties the weekend before Spring Break, and there are some images of couples kissing, dancing and drinking
Nudity:
Upper male nudity at parties
Alcohol Use:
Lots of alcohol use and some apparent drunkenness (one alcohol drink is called a “death punch”)
Smoking and/or Drug Use and Abuse:
College senior vapes a lot, and some images of people smoking pot; and,
Miscellaneous Immorality:
Lying, three men decide not to call authorities after discovering an unconscious girl, college woman brings her underage sister to college party but neglects her until she’s missing, college students have wild crowded parties, hypocrisy.

EMERGENCY is a tension-filled social drama sprinkled with comedy about two black college students and their Hispanic roommate who decide to drive a sick, stoned white girl to the hospital instead of calling 9-1-1 because one of the black students is afraid of being shot by police. EMERGENCY’s script is too pat and too politically correct, with scores of “f” words and a few strong profanities, but the drama, suspense and comedy is often engaging and makes some good points about modern racial issues, although the characters make dumb, silly decisions that put them in more danger and that dilute the legitimacy of the movie’s liberal, leftist conclusions.

EMERGENCY opens by introducing Kunle and his best friend, Sean, two black college students looking forward to graduating in two months. Kunle, who comes from immigrant parents, is the more serious student. He’s working on a fungus experiment for his thesis, but Sean hasn’t even started his thesis. Also, Kunle is waiting to tell Sean that he’s been accepted to Princeton in New Jersey, because Sean thinks they’re going to living near one another after graduating.

Kunle and Sean are scheduled to go on an epic night tour of college parties just before Spring Break. They return to their apartment to get ready, but they panic when they realize their roommate, a nerdy Hispanic student named Carlos, has left the door open. Inside, they find a drunk, semi-conscious white girl passed out on their hardwood living room floor. Searching the back of the house, they find an oblivious Carlos with headphones on while playing a loud video game.

Kunle has had some CPR training, so he makes sure the girl doesn’t choke on her own vomit. He starts to call 9-1-1, but Sean slaps the smartphone out of his hand. Sean convinces Carlos and a reluctant Kunle that, if they call for help, the police who come with the paramedics will get the wrong impression of what’s happening and may even end up shooting one of them. They decide to take the girl to the nearby hospital instead, because it’s only 10 minutes away.

However, they run into a sobriety checkpoint, take a side street, and end up back at fraternity row where all the Spring Break parties are happening. They decide to put the girl in the front yard of the fraternity house at the end of the street and pretend they just discovered the girl and get some help.

Kunle gets out of the car to be a lookout, to tell Carlos and Sean when the coast is clear to bring the girl out of the back seat of Sean’s van. However, the plan goes wrong. A drunken black student starts urinating on the fraternity’s totem pole display near Kunle, and some irate white fraternity brothers chase him and Kunle, thinking Kunle was part of the prank. Kunle hops back in the van, but the white students throw things at the speeding van and break the right rear tail light.

Meanwhile, the girl’s sister, another blonde named Maddy, realizes her sister, Emma, has left the party they were attending. Frantically, she searches for Emma and gets help from a friend named April and a boy in a fraternity toga April just met. One of them suggests to Maddy that she track her sister’s phone using GPS.

Using a bicycle and a motorized skateboard, they track Emma’s phone to Sean’s van, which is sitting in a nearby suburban street next to the college. The boys have just discovered, however, the broken tail light. Now, Sean knows they’re going to be stopped by police if they drive to the hospital. He decides they must go to his brother’s house and ask to borrow his car. The van speeds away, but Maddy and her two friends are too far away to stop them. So, Maddy calls 9-1-1 on the van, but the dispatcher starts questioning Maddy’s story about two black men and a Hispanic guy kidnapping her sister.

A chaotic, funny, intense chase ensues. Will Kunle, Sean and Carlos ever get Emma to the hospital? Will Maddy catch up with them? Will the police get involved and end up shooting someone?

EMERGENCY is engaging, suspenseful, dramatic, and often funny. As a social drama, the movie makes some good points about racial issues. For example, it shows that people’s attitudes about racial issues and other races are influenced by their individual experiences and by what the society around them teaches consciously and unconsciously. However, it eventually takes a politically correct, leftist stance on the subjects of race and racism. Thus, the movie’s premise is to prove Sean is right about his fear of the police and his attitude that white people are often insincere to the point of hypocrisy as well as clueless about what “people of color” experience. So, when a policeman ends up pointing a gun at Kunle, it convinces Kunle, and is meant to convince the viewer, that Sean was right all along about everything, including his warning about not calling 9-1-1.

However, the plot to this story a too pat. A series of crazy coincidences leads to a policeman pointing a gun at Kunle. Also, the coincidences started when he, Sean and Carlos started to break the law in the first place and decided not to call 9-1-1. Furthermore, considering the facts from the perspective of the policeman, it’s no wonder he pointed a gun at Kunle. In fact, Kunle is lucky the policeman didn’t fire his gun. Finally, it can be argued that the three young men made a series of dumb decisions that led to their predicament. Also, their predicament is only one example. As such, it represents anecdotal evidence. All this dilutes the legitimacy of the movie’s liberal, leftist conclusions.

EMERGENCY also, sadly, has at last 200 obscenities, including many “f” words. There are also several profanities, as well as lots of alcohol use and some marijuana use. Finally, Sean makes a crude sexual joke in one scene.