5 Things That Make the Themes in WOODLAWN Important 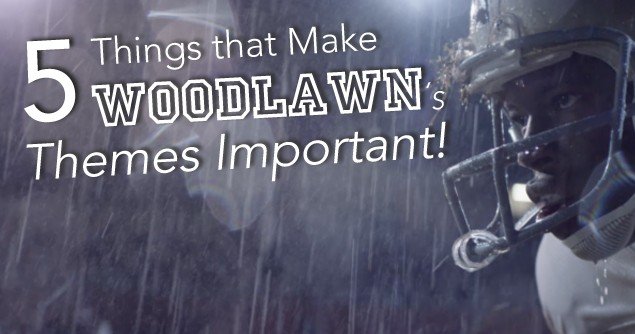 5 Things That Make the Themes in WOODLAWN Important

WOODLAWN is the newest movie by Erwin brothers who previously brought us OCTOBER BABY. In their newest movie, a group of high school football players in the 1970s are radically saved when one man comes in to tell them about the Gospel. Because of this revival, the team is able to abandon their racial antagonisms, and an entire town is changed for the better. This movie is a example of the power of God. Although it is not a perfect movie in terms of dramatic structure, there are a lot of lessons within the stories that created this movie. Here are 5 main themes that WOODLAWN exemplified. 1. The movie is based on a true story. WOODLAWN is based on actual events that occurred in Alabama in 1973. The story is based on the revival of a football team that included NFL player Tony Nathan who is portrayed by Caleb Castille in the movie. This story proves that when we turn to God in the midst of crisis anything is possible. 2. WOODLAWN is not just a story about race, it’s a story about revival. Although WOODLAWN takes place during the height of the ’70s desegregation, it’s not just a movie about overcoming racism. This is a movie about revival. Through out this movie, revival breaks out because of the courage of one man to stand up for Christ and speak to a group of football players. The fire for Christ was not confined to just the football team though, everyone in the school, including the teachers, were somehow affected by the gospel. Passion for God and proclaiming His glory is an overwhelming theme in this movie. 3. Youth can impact adults just as much as adults can impact youth. WOODLAWN is not a story of a group of adults changing their world and helping a town, this is story about teenagers who learn about forgiveness and about the grace of God. Because they are so impacted, a group of football players is able to go into their school and change the lives of not only their fellow classmates, but of their teachers and coaches as well. During the movie a teacher admits that she is following the lead of the “kids.” God can use anyone to bring about change, even young people. WOODLAWN is a great example of the verse in 1 Timothy 4:12, “Don’t let anyone look down on you because you are young, but set an example for believers in speech, in conduct, in love, in faith and in purity.” 4. WOODLAWN proves that revival can begin anywhere. During the beginning of the movie we can see that life is not exactly rosy in Birmingham. Desegregation is taking a toll on the town torn by racism, yet this is where God tends to work best. The story of this football team proves that when God shows up, even the worst situations can be used to glorify him and lives can be saved. Because of one man’s courage to stand for God in the face of adversity and hate, God was able to transform an entire town. 5. WOODLAWN is the story about the power of forgiveness and love “I’m asking you to make a decision to change, to forgive, to choose Jesus,” says Sean Astin as Hank. Because of their decision to follow Jesus, the players in Woodlawn learn to choose forgiveness. They learn to choose love over hate. WOODLAWN is a vital story that shows the power that forgiveness and love can have in order to overcome differences within society. “Therefore welcome one another as Christ has welcomed you, for the glory of God.” (Romans 15:7) Read the review for WOODLAWN here.

Editors Note: Moriah Dee is an aspiring actor and writer. She grew up in Western Michigan and is currently pursuing her acting career in Los Angeles, California.