An Open Letter of Thanks to the John Templeton Foundation 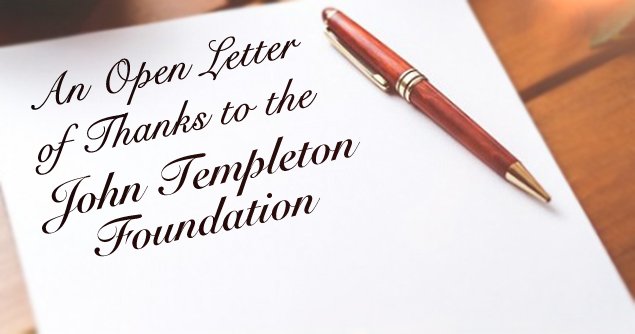 An Open Letter of Thanks to the John Templeton Foundation

Thank you for the 24 years of support for the Annual Faith & Values Awards Gala & Report to the Entertainment Industry that has helped transform the mass media of entertainment, as Sir John Templeton and Dr. John Templeton.

We are still blessed tremendously by Sir John’s inspired call in 1988, and his years of wise direction, as well as by the years of Dr. John Templeton’s faithful encouragement, guidance and support.  They made the world a better place in so many wonderful ways with their decision to award the Templeton supported Prizes for Inspiring Movies & TV, which Sir John originally called and continued to call for several years the Templeton Prizes in the Hollywood Entertainment Industry.

When Sir John called in 1988 to commend our ministry and asked me to prepare the Annual Faith & Values Awards Gala & Report to the Entertainment Industry to present the Templeton Prizes in Hollywood, the major studios in Hollywood released few movies with any positive spiritual content or values at all.

By the time we started the Annual MOVIEGUIDE® Faith & Values Awards Gala and Report to the Entertainment Industry in 1992 and 1993, there were 27 such movies that fit Sir John’s desired criteria, or about 10.38% of the market share. Incredibly, 24 years later, in 2015, at least 161, or 55.14%, of the major movies released theatrically by the movie industry contained at least some positive redemptive, spiritual content.  That’s a numerical increase of 496%.

Also, when we started talking with Sir John in 1988, less than 6% of the major movies produced in Hollywood were aimed at families.  In the past 10 to 15 years, movies marketed to families have increased to nearly 40% of the top movies released in your local movie theaters.

In addition, since we started in 1985, there were only about one or two movies being made with strong, explicit spiritually uplifting, redemptive content or values, but last year, with the Foundation’s support, there were at least 65 such movies!  That’s at least a 3,150% increase over 31 years, and a 38.30% increase in the past three years of the current three-year grant (there were 47 such movies in 2012).

Finally, in 1996, thanks to the support of Sir John and later Dr. Jack Templeton often through the John Templeton Foundation, including the Templeton (renamed Epiphany) Prizes for Inspiring Movies & TV, we began a box office analysis of movies with strong spiritually uplifting, redemptive content.  Since then, the number of movies with such content has increased from only 16 to 65 or more, a growth of 306%.  In that time, the box office earnings of such movies has gone from $208.63 million in 1996 to about $5.35 billion dollars with a “B,” an increase of 2,463%!  The average earnings of such movies have increased from only $13.04 million per movie to nearly $82.28 million, an increase of nearly 531%!

The former chairman of a major Hollywood studio told me he attributed all these positive shifts directly to the influence Sir John and the Foundation initiated as well as our MOVIEGUIDE® box office analysis in the Annual Report to the Entertainment Industry.

Other industry leaders have said similar things.  In fact, many major movie studios now have a Christian, faith-based film division, and several studios are doing major movies with strong and overt Christian or biblical content.

Also, now, all the major studios, not just the Walt Disney Company, and most of the major independent studios, are producing movies for young children and families.

This doesn’t mean, of course, that the studios aren’t doing bad or horrible movies any more.  However, it does mean there are fewer and fewer bad movies, and an increasing number of good ones.  It’s our prayer that the movie industry will make more and more commendable movies, and remove all offensive elements from them.

Sir John understood the history of the Golden Age of Hollywood and that part of the reason for the breakdown of character and faith in movies and television, and in the culture at large, is that people of faith retreated from being salt and light in the culture.

From 1933 to 1966, the Roman Catholic and the Protestant Film Commissions and helped the Hollywood reach the largest possible audience by adhering to high standards of character and vision.  As a result, MR. SMITH [went] TO WASHINGTON, IT [was] A WONDERFUL LIFE and THE BELLS OF ST. MARY’S rang out across the land!

When the major family oriented, faith and values backer withdrew its funding of over half of the budget, it forced the Protestant Film Office to close its advocacy offices in Hollywood in 1966 (in spite of many pleas to stay by the top Hollywood filmmakers and studio executives, such as Sam Engel at Paramount Pictures). This sadly opened the floodgates to violence, sex and bigotry as movie went from 100% broad audience to more than 50% R rated.

Sir John and Jack, acting both with and without the John Templeton Foundation, helped to turn the situation right-side up and redeem the mass media of entertainment by encouraging the good, the true and the beautiful with the Annual Faith & Values Awards Gala, the Report to the Entertainment Industry, and the John Templeton Foundation Epiphany Prizes, Kairos Prizes and Chronos Prizes.

MOVIEGUIDE®’s analysis of every major movie gives our readers a moral perspective on the entertainment industry, both its positive and negative effects, and provides us with the data we need to select and prepare the Annual Report to the Entertainment Industry and to select the John Templeton Foundation Epiphany Prize winners.  Guided by more than 35 years of research and 50 years of scientific studies on the impact of the media and on media literacy (see the attached information from external sources), MOVIEGUIDE®’s analysis consistently shows that family-friendly movies with moral, biblical, godly, redemptive, and spiritually uplifting stories, themes, sounds, and images usually make far more money at the box office on average than movies with excessive violence, foul language, nudity, explicit sex, and other objectionable content.  The Annual Report to the Entertainment Industry not only gives studio executives and filmmakers crucial, definitive information on how to make better, more effective movies; it also directs the media viewing habits and media literacy of moviegoers and the general public.

Furthermore, thanks to Sir John and Dr. John Templeton’s direction and support, two of the three major television networks (NBC and ABC) have hired executives who want to increase the faith and values in their programming, and more and more cable broadcasters are seeking to reach the broad audience that the Report to the Entertainment Industry defines.

Wouldn’t it be wonderful to not only continue but also to increase the influence of the Annual Faith & Values Awards Gala and the John Templeton Foundation in the area of television!

In fact, the Foundation already has had a positive impact on television.  Since the Sir John began his financial support of Good News Communications and MOVIEGUIDE® years ago, several new cable channels devoted to family-friendly programming, including spiritually uplifting programs, have been created and are doing wonderfully well in the ratings.  Also, in recent years, there have been several popular new programs promoting inspiring, spiritually uplifting content, including DUCK DYNASTY, BLUE BLOODS, THE BIBLE miniseries, A.D.:  THE BIBLE CONTINUES, SAINTS AND STRANGERS, DOLLY PARTON’S COAT OF MANY COLORS, and a musical production for families of THE PASSION.  Last year, the Dolly Parton movie drew 15.9 million viewers over seven days, which is equivalent to more than $134 million at the box office.  Most Hollywood movies don’t do that well over their whole release period, much less in seven days!

Imagine what we could do if we expanded our mission to include an annual comprehensive analysis of most major television programs, with the intent of adding some additional awards for TV at the Annual Gala.

Sadly, the Foundation’s new grant schedule will forego the Foundation-inspired prize monies in 2017 for the 25th anniversary of the Annual Awards Gala.

Even so, history must remember with gratitude that Sir John and Dr. John Templeton’ helped to change the mass media of entertainment and redeem the culture through their prescient strategy with the Annual Faith & Values Awards Gala & Report to the Entertainment Industry and the major prizes they initiated.

How wonderful it would be to celebrate Sir John’s vision for transforming the Hollywood Entertainment Industry at the 25th anniversary of the Faith & Values Awards Gala next year.

And all of us at Good News Communications, Inc.

Editor’s Note:  For those of you reading this letter that would like to support the Annual Faith & Values Awards Gala & Report to the Entertainment Industry, you can help by donating to the Movieguide® Awards Gala here.