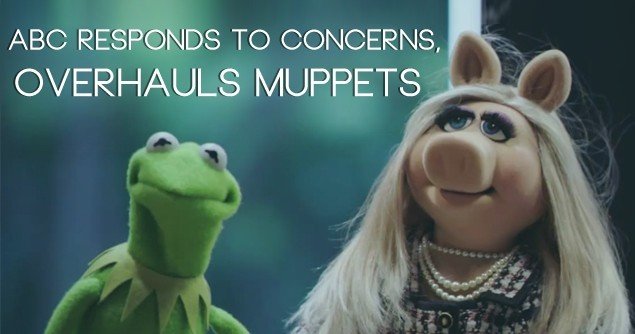 ABC recently removed Bob Kushell from his position as the executive producer and showrunner of the new Muppets TV series.

The announcement came after concerns were voiced regarding the amount of adult content referenced or seen in the show, including a study conducted and published by the Parents Television Council. The PTC study reported that “were exposed to adult-themed content every 3 minutes and 38 seconds during the first four episodes.”

Kushell reportedly wanted to take the show in a more adult-oriented direction from the beginning, saying, “We know our audience is going to be families watching, adults watching with their children, so we’re not pitching stories or thinking of stories that are, like Norman Lear stories from the 1970s.”

However, the new take on the classic characters was not received well by everyone. The PTC urged families to be careful in letting their children watch the program and urged the network and producers to re-examine the show’s content and themes, as stated in an article released with the study.

“Make no mistake, children are inherently attracted to The Muppets, and over a million young children are watching the program each week,” PTC President Tim Winter said. “No matter how ‘edgy’ ABC or the show’s producers want to make The Muppets, kids still reasonably believe the show is for them. We urge the network and everyone involved with this program to re-think the dangerous direction of this program. And in the meantime, we urge parents to be warned about letting their children watch The Muppets.”

The organization One Million Moms also put together a campaign for people to voice their concerns directly to ABC regarding the issue.

After such negative responses from some viewers and organizations like the PTC, Kushell’s removal ABC may indicate that the network is shifting their approach.

“Our goal was not to get somebody fired, but this is a good barometer for us in that serious changes must be being considered over there at ABC for the show, and that is a positive thing,” Winter said in an interview with The Christian Post. “Some of the other family-friendly groups, some of the pro-family groups, they were taking note and sharing our research. The more people who are talking about it, it usually leads to a more quick and decisive outcome, and that certainly seems to be what happened here.”

ABC has reportedly hired Kristin Newman, who has worked on productions including That ’70s Show and Galavant, to replace Kushell. Newman is said to be taking over The Muppets, which slated to air 16 episodes for its first season, 10 in the fall and six in the spring, once the show comes back from its winter hiatus.

“We don’t know a whole lot about her and where she intends to take the show. When you look at what happened with the show, the ratings, the scrutiny and so forth, the content of the show was clearly a different direction than what the world had come to know about the ‘Muppets,’” Winter said. “The only reason you would have a change of a showrunner is to reevaluate that direction. Mr. Kushell was very outspoken in his desire to take it in a more adult-themed direction, and he did. The fact that he has been bounced out certainly suggests that a better direction is in store for the franchise.”