Charlie Sheen Should Have Shared About His HIV Earlier 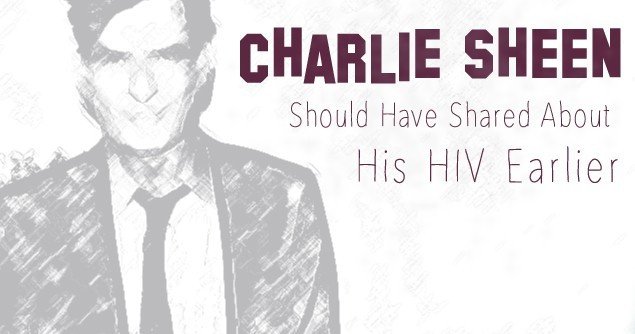 Charlie Sheen Should Have Shared About His HIV Earlier!

Actor Charlie Sheen went on the TODAY show recently with Matt Lauer and confessed he had HIV, the deadly virus causing AIDS, and had several partners, whom he informed in advance. His presentation of the scope of his infamy was self-serving in the extreme.

After this revelation, many of his partners, some of whom were young and vulnerable and naïve, said he never told them he had HIV.

SaveCalifornia.com, in a hard-hitting article, pointed out Charlie Sheen’s HIV must have come from multiple at-risk sexual encounters, including homosexual and transsexuals. According to the U.S. Centers for Disease Control (CDC), homosexual encounters are the main cause of HIV transmission and AIDS. Also, “transgender” people have the highest rate of new HIV infections.

The SaveCalifornia article is too strong for a family entertainment site, but the evidence is irrefutable that Sheen’s behavior was worse than abhorrent but was reprehensible, and ruined the lives of many people. He took advantage of these young women and others, just as Bill Cosby did. Many of Charlie’s conquests are individuals who wanted a future and a family, and Charlie Sheen has deprived them of both.

“When Sheen had sexual liaisons with homosexuals and transsexuals,” Randy Thomasson, president of SaveCalifornia, said, “he opened himself to being infected with HIV.

“Male homosexuality, bisexuality and transsexuality [are] the highest risk and the most frequent transmitter of HIV. Everyone should agree that sexual promiscuity and homosexual behavior invite infection and should be discouraged, and that marriage with fidelity between a husband and wife is the real ‘safe sex’ and should be promoted. These are the trustworthy facts that every teen and pre-teen should be taught.”

Editor’s Note:  You can find the SaveCalifornia article here at you can find at http://savecalifornia.com/11-17-15-why-charlie-sheen-got-hiv.html, but be warned that it’s meant to be read by adults only.