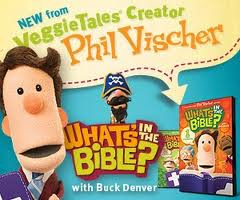 The first three volumes in Phil Vischer’s WHAT’S IN THE BIBLE are delightful and informative. Phil’s work on VeggieTales has been a huge hit with children. I was actually introduced to them by some college kids who went around singing songs like “Oh, Where Is My Hairbrush?” His sense of humor is not just for five-year-olds. A wide range of ages should be able to enjoy this series. The instruction bounces around between newsman Buck Denver, the elderly Sunday School Lady, archeologists Clive and Ian, Brother Louie, Pastor Paul, and others in such a way as to help hold the attention of children.

Phil is famous for his cute songs and he has several in WHAT’S IN THE BIBLE? What’s great is that some of these songs actually help to make sense of books of the Bible that seldom wind up on people’s lists of favorite scripture. He even explains the fallacy in “The Da Vinci Toad,” yes I said “toad.” It’s cute.

that it really does explain what the Bible is, what it is about, who wrote it and the purpose of different types of books in it. It has an animation explaining salvation and a second animation explaining redemption, both cute and very clear. You will come away from this series of comedy skits with a real understanding of the Bible few adults have today, much less children. This series meets a very real need and does it with style. Adults should watch this with their children. They might be surprised at all they can learn.

This time most of Phil’s characters are puppets. Where there is animation, it is clearly not VeggieTale quality computer graphics, but the greatest strength of VeggieTales was always Phil’s humorous way of sharing profound truth. That’s here in full and Phil himself appears frequently as a host of his latest cast of characters. His interaction with his cast is part of the fun.

I look forward to seeing the rest of the series and believe these will be a great tool in Sunday Schools and homes across America.