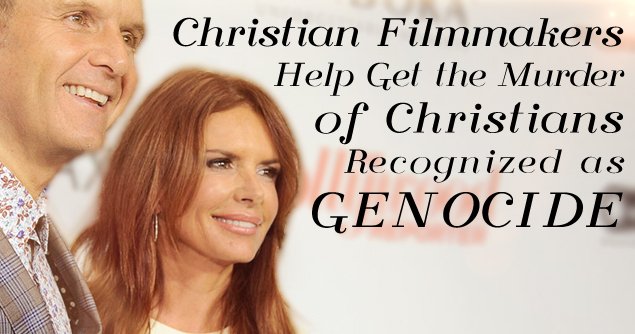 Roma Downey, best known for her role in the hit TV show Touched by An Angel, recently used her platform as a Hollywood actress and producer to reach out to Secretary of State John Kerry via Twitter, urging him to call the Islamic State’s persecution of Christians and other religious groups “genocide.”

Downey’s tweet read:  “Dear @JohnKerry: The US House of Representatives just passed the Genocide resolution, unanimously, 393 to 0! Will you do your part, now?”

At the time, the White House and State Department had declined to label the atrocities as “genocide,” despite the fact that the E.U., former Secretary of State Hillary Clinton, Pope Francis and others believed there was plenty of reason to do so. The Associated Press also reported that the State Department probably wouldn’t meet the March 17 deadline to decide whether the Islamic State was committing genocide.

On Thursday March 17, two days after Downey’s urging, Kerry announced that the United States had determined that ISIS’ actions against the Yazidis and other minority groups in Iraq and Syria constitutes genocide.

“My purpose here today is to assert in my judgment, (ISIS) is responsible for genocide against groups in areas under its control including Yazidis, Christians and Shiite Muslims,” he said during a news conference at the State Department.

Prior to sending Kerry her passionate message, Downey and her husband, producer Mark Burnett, called on the State Department to issue a genocide designation. They, along with 134,000 concerned individuals, signed a petition created by the Knights of Columbus and the human rights advocacy group, In Defense of Christians. The petition called on Kerry to issue a designation and added that “extensive and irrefutable evidence supports” such a designation. Among those who signed the petition were Steve Forbes, chairman and editor-in-chief of Forbes Media, and renowned evangelist Ravi Zacharias, founder and president of Ravi Zacharias International Ministries.

Mark Burnett and Roma Downey’s action serves to exemplify what can happen when Christians stand up and intervene, both in prayer and in action for our brothers and sisters. They were able to wield their influence and bring awareness to this very important issue, likely inspiring their fans to pray and intercede for those suffering at the hands of ISIS and other terrorist organizations.

Each one of us has a sphere of influence in which we are to shine and glorify the Lord with our faith. May we be exhorted to use our role in life, be it as a businessman, student, or stay-at-home wife, to be the hands and feet of Jesus Christ, “making the most of every opportunity, because the days are evil” (Eph. 5:16, NIV).

“Remember also those being mistreated, as if you felt their pain in your own bodies.” – Hebrews 13:3, NLT