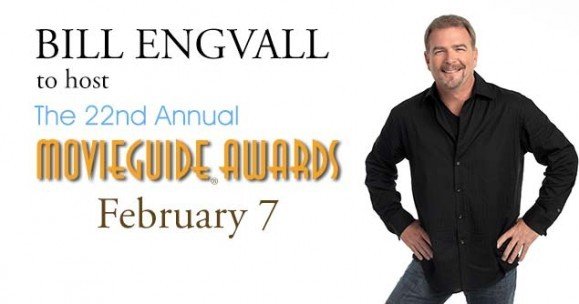 One of the top comedians in the country, Engvall has received a Grammy nomination. Most recently, he was a contestant on Season 17 of ABC’s “Dancing with the Stars,” where he was a fan favorite and made it to the finals.

Earlier this year, he lent his voice to the CMT animated comedy series “Bounty Hunters.”

Engvall has also starred in several Comedy Central solo specials, reunited with Jeff Foxworthy and Larry the Cable Guy (his “Blue Collar Comedy Tour” buddies) for “Them Idiots Whirled Tour,” which aired on CMT, and written several books, including his 2007 autobiography, “Bill Engvall – Just a Guy.”

His comedy albums include “Here’s Your Sign,” which held the No. 1 position on the Billboard Comedy Chart for 15 straight weeks.

Engvall hails from Galveston, Texas. He resides in Southern California with his family.

A highlight of the Faith & Values Awards is the presentation of the two $100,000 Epiphany Prizes for Inspiring Movies & TV, which honors the best movie and best television program in 2013 that “greatly increases man’s love or understanding of God.”

This year, with additional support from the Templeton Foundation, Movieguide® has added another screenwriting competition, the $50,000 Chronos Prizes for Inspiring Screenplays by Established Filmmakers.

For the second year in a row, the 22nd Faith & Values Awards will hand out the $50,000 Friess Foundation Free Enterprise Prize for promoting free market principles in movies and television.

At the Faith & Values Awards, Dr. Baehr will present highlights from Movieguide®’s 2013 Report to the Entertainment Industry, a comprehensive financial analysis of the movie business showing what kinds of movies and what kinds of movie content moviegoers favor the most with their hard-earned money.