This Conservative Comedian is Taking Liberal Cities by Storm 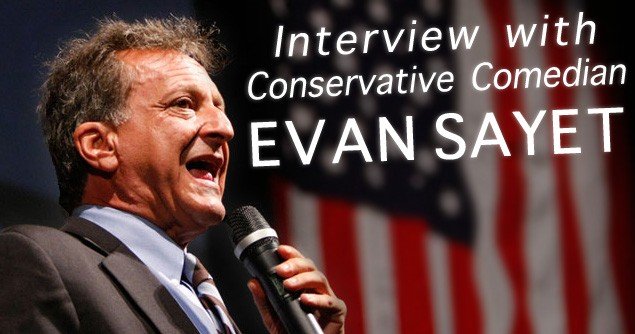 This Conservative Comedian is Taking Liberal Cities by Storm:

An Interview with Evan Sayet

“Everything is changing. People are taking their comedians seriously and the politicians as a joke.” This quote from humorist Will Rogers (1879-1935) rings more true now than ever before. John Oliver, Stephen Colbert and Bill Maher are only a few of the comedy late night hosts, 100% of which are unabashedly liberal. Whether we like it or not, this is the age where a large portion of Millennials receive either their news (or their perspective on the news) from Comedy Central instead of CNN or Fox News. “We don’t have a Bill Maher for the right,” says Evan Sayet, a conservative stand-up comedian whom MOVIEGUIDE® interviewed.

Sayet has begun his new comedy tour to change that very thing. Opening to a packed room in Phoenix on May 27th, Sayet has shows planned in Chicago, Boston, New York City, and others. “Comedy, humor, wit, satire, it has always been an acceptable way to speak truth to power.” Sayet continued, “It really requires the other side to acknowledge that there is some truth, and something that bothers them about your portraying them as ridiculous.

Growing up a Democratic, Sayet would say that he was a Liberal by “default.” “I was a New York Jew, so I knew what all liberals knew. I knew that Democrats were good and that Republicans were evil. So I must be a Democrat. It wasn’t a thoughtful Liberalism.”

However, all of that changed for Sayet after the terrorist attacks on 9/11. “I call myself a 9-13 Republican, because 9/11 didn’t surprise me. Obviously I didn’t know the date, I didn’t know the target, but I knew just enough about the world to know that the same people who are murdering the Jews of Israel for no other reason than that they were the closest infidels….would figure out a way to get across that great ocean to get the big infidel. What really surprised me was the Liberal response to the attacks, the idea that we deserved them.”

After attending some Republican meetings and finding that they were actually rational, logical and intellectual people, everything changed. Sayet regularly says that, “The first time you think is the last time you’re a Democrat.”

Comedy however, no matter how hysterical or true it is, isn’t welcomed warmly if it has any conservative slant. “I was told point blank by one of the top guys at Showtime. I brought them my idea for my Right to Laugh: A Night of Conservative Comedy. They told me point blank, “This would probably be the highest rated show in our history, but we can’t do it, it goes against our brand.” What late night show is going to have a conservative host? Jimmy Fallon or my old boss Bill Maher? The good news is, technology has come a long way and has allowed us to break through and go around the gatekeepers. But, it’s still very, very difficult for a conservative act.”

Even so, Sayet works hard to be the better comedian, avoiding cheap shots of the other side. “We don’t hate the other side. They hate Fox News. We don’t hate Katie Couric. We don’t hate Anderson Cooper. We’re sorry they see the world the way that they do and wish they were more honest in their reporting, but we don’t hate them. Their facts are shallow conventional wisdom. Their jokes are, “Isn’t George Bush just the stupidest human being who ever lived.” It doesn’t take long to realize Sayet is right, almost eight years after George Bush left the White House, a week hardly goes by when he isn’t mocked on TV.

What you don’t see is the liberal comedians think twice about the rationality of the jokes they make. In a rare instance, nearly a decade ago on the Bill Maher show, the late Atheist Liberal Christopher Hitchens unloaded his disapproval of Bill Maher’s jokes against President Bush. Hitchens stated, “I’ve been on the Jon Stewart show, I’ve been on your [Bill Maher] show, I’ve seen you make about five George Bush IQ jokes per night. There’s no one I know who can’t do it. You know what I think, this is the joke that stupid people laugh at. It’s a joke that any dumb person can laugh at because they think they’re smarter than the President…. None of whom [pointing at the audience] are smarter than the President.” Hitchens received boos for being ideologically consistent in that moment, which reveals the true nature of what the audience wants.

Sayet wants to entertain, but that’s not all he wants, “Conservatives believe in the existence of the better. We spend our lives trying to better ourselves, and we don’t think that we’re God. Liberals, because they don’t believe in the existence of “better,” whether it’s not believing God, or not believing that America is exceptional, they spend their life just trying to be themselves. It’s a culture of narcissism.”

What can conservatives expect from an evening at Sayet’s shows? “It’s more than a night of just laughter.” Sayet explains, “You actually leave enlightened and strengthened in your convictions because there’s logic to our side. Reason to our side. Goodness to our side.”

You can get tickets to Evan Sayet’s tour here.