Destroying the Seed: A Call for Revival 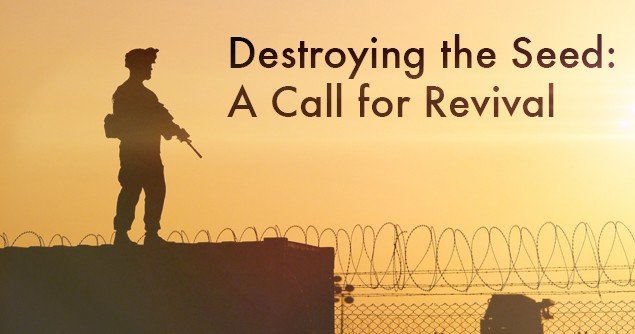 Recently, while watching a war documentary called THE HORNET’S NEST, it became clear, if the future of the country is its children and grandchildren, many of the best and brightest are being removed from the Creation mandate. To put it very simply, for those who believe the Bible, Satan is always attempting to destroy the seed: the future generations.

In THE HORNET’S NEST, it’s clear that some of the best and brightest died fighting for their country in Afghanistan. This raises a lot of issues. Especially considering the current submission to Shariah Law in many areas of society. The Devil’s efforts to destroy the future can also be seen in the millions of babies who’ve been slaughtered through abortion, producing a demographic winter, as well as the fact that many of the best and the brightest are so consumed by the lust of the eyes and the lust of the flesh that they have been seduced away from the joy of building the future to hedonistic, pagan self-satisfaction. Another area where the Adversary has been working overtime is the abuse, trafficking and exploitation of children. Nor should any forget the turning of women into sex objects and the renunciation of men and women of their wonderful God-created identity. Drugs and alcohol have also taken their toll. More recent is the Leninist flood of social costs out taxing our ability to survive.

Regrettably, as Ann Graham Lotz, the Rev. Billy Graham’s daughter, said recently, “We succumb to the old serpent’s tactics by being. . . too deceived to discern the truth. . . that the Devil is real.”

However, for those with eyes to see, look around America today, and it’s hard to even find a remnant of the great country our Founding Fathers initiated in obedience to God’s Word Written. The moral and spiritual infrastructure is breaking down, and the crowds are no longer civil.

That said, this is an opportunity too. Proclaiming the Gospel and witnessing to our neighbor with love cannot only snatch a few from the clutches of the Adversary, but also bring Revival, Reformation, Renewal that will re-energize and reinvigorate the country. The time is short. The future is on the verge of being lost, but God is in charge and the people who know Him need to stand together to make a difference.