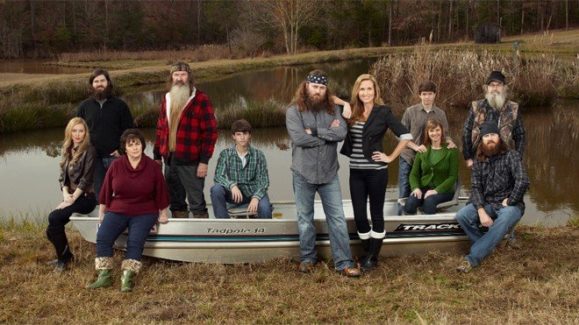 Here’s the plot sketch:  A money-hungry cable network is searching for a new reality TV show to boost their ratings. They’re fresh out of ideas when a marketing agent finds out about an interesting family from the backwoods of Louisiana, the Robertsons. They’re self-made millionaires who run a duck call and sporting goods company, and they live in a swamp and go about life like an average, working-class family. The men also have some pretty epic beards.

The agent spills the news about what he’s found, and the creative board at the cable company is drooling. This Louisiana bayou family has all the ingredients for a knockout reality show: unique, quirky but relatable characters, an unusual lifestyle, a world most people will never live in but would be interested to see, and a strong family bond.

Best of all, the family is willing to sign a contract to do a show! Done deal, right?

There’s a catch: the family is a Christian family. We’re not talking about the decent-person, Easter-and-Christmas-type of Christian either. We’re talking about devoted, family-value Christians who take their faith very seriously. So seriously, in fact, that if their faith can’t be part of the show, there won’t be a show.

The network is conflicted. They’re chomping at the bit to get the ratings boost and advertising dollars they know this family will give them, but they don’t want to deal with the family’s faith. So, they try to compromise with the family. They’ll let the family express their values on the show as long as it doesn’t go “too far.” They’ll show the Robertsons praying at the table together and show them talking about their faith every once in a while. The family agrees, the contract is signed, and the cameras roll. Months later, the show is on the air, and the network’s ratings skyrocket.

Soon, the network gets greedy and begins to overstep their bounds. To make the show a tad more edgy (with hopes of getting even better ratings), they start inserting fake bleeps in the show’s dialogue, even when the characters didn’t curse. Then, they ask the family to stop saying “In Jesus’ name” during their dinner-table prayers. They want the ratings, and maybe some family values. . . without the family’s values.

So, the Robertsons fight back, and the network listens. After all, this family is responsible for the most-watched show in their history, not to mention one of the most successful shows in television history. They’re already millionaires and don’t care about money, so not renewing a network contract wouldn’t be a problem for them. For the Robertsons, staying true to their convictions matters more to them than staying on television. They don’t need the network nearly as much as the network needs them.  The family patriarch, Phil, even goes so far as to say these words to an international media outlet:

“You gotta remember, it’s spiritual warfare. I mean, you’ve got people with no moral compass. It ain’t there. So what I tell people is be patient.

“They’re the ones, they own the network, and we’re filming the show.

“We signed the contract with them, ok, and it’s a workhouse, but what people have to understand is, the people of God have to understand, you’ve just got to be patient. You don’t turn that ship quickly. It’s a big ship. A lot of depravity and a lot of heathen and a lot of the evil one. He is entrenched in the United States.”

So, the drama continues. Phil criticizes the network, calling the editors people “with no moral compass.” The network pushes back, doing everything in their power to minimize the family’s Christian convictions on the show.

In the end, though, the family wins. The show dominates cable television and its ratings increase each season. As it turns out, the very things the network wanted to minimize are the things its audience loved the most. The network realizes that the American viewing audience is actually a little more conservative and committed to faith values than they thought, and the Robertsons become household names.

I almost forgot to mention, this isn’t really a movie idea I thought up. It’s a real life drama.

If you enjoyed this article, please consider making a tax-deductible donation to Movieguide to help us continue in the work of redeeming Hollywood.