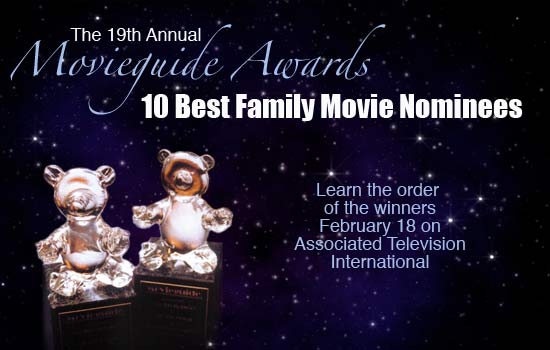 Ten movies are in the final running for the Crystal “Teddy Bear” Award for the Best Family Movie of 2010, the executive producers of the 19th Annual Faith & Values Awards Gala and Report to the Entertainment Industry announced today.

The winning movie will be announced at the awards Feb. 18 at the Universal Hilton Hotel in Universal City, near Hollywood, Calif.

The 10 nominees for Best Family Movie of 2010, in alphabetical order with major distributor, are:

“The Chronicles of Narnia: The Voyage of the Dawn Treader” – 20th Century Fox

“How To Train Your Dragon” – DreamWorks/Paramount

“Legend of the Guardians: The Owls of Ga’Hoole” – Warner Bros.

The Annual Faith & Values Awards Gala is sponsored by the Christian Film & Television Commission® ministry founded by Dr. Ted Baehr, who will announce the winning movie on Feb. 18.

For more information on the Gala, go to movieguideawards.com