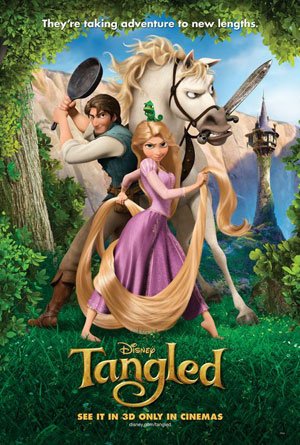 TANGLED is Disney’s comical animated version of the Rapunzel fairy tale. A wicked old hag steals the baby Rapunzel from the King and Queen because a magical flower created by a drop of sunlight gives Rapunzel’s hair a glow that can heal people and make them younger. The hag pretends to be Rapunzel’s mother and locks her away in a hidden tower. Eighteen years later, Rapunzel wants to find out why mysterious lights appear in the sky on her birthday. An errant thief gives Rapunzel a chance to find out. They don’t know that the lights are lanterns set loose by the king and queen, still hoping to find their daughter with the golden hair.

TANGLED is beautifully made, funny, exciting, delightful, and touching, especially the second half. The 3D is used to good effect without becoming overbearing. A moral conflict is not completely resolved, however. In a way, Rapunzel rebels against the woman she thinks is her mother. Also, magic is a major plot point, but there’s a sacramental quality to it and some of the dialogue and images. Taken overall, this sacramental quality gives TANGLED strong redemptive symbols pointing metaphorically to Christian teachings.

(CC, BB, RoRo, Pa, Ho, V, AA, M) Strong redemptive worldview with allegorical and sacramental elements and themes that can be interpreted in a miraculous Christian, redemptive sense, but based on a light fairy tale story with some confusing relationships between the wicked hag who steals Rapunzel and poses as her mother and diminished by strong Romantic, magical elements about following one’s dreams and conflicted rebellion against a parent who turns out to be false, where the magical elements also have Christian, redemptive themes like “I see the light,” which becomes a literal metaphor, and “save what once was lost,” both of which can point to Christianity and Jesus (the “Light” of the world), plus many strong moral principles and both of the main characters have to sacrifice themselves literally to save the other and others; no foul language; lots of cartoon action and comical violence includes jumping off cliffs, falling off castle walls, fighting, getting caught in the destruction of a dam, surviving a flood, man hit on the head several times with a frying pan, being thrown around the room and actually being stabbed with a spot of blood as well as cutting one’s hand with blood; no sexual immorality but light kissing; no nudity but there are very well-endowed female characters; references to getting drunk and one drunk comical character; and, magical hair, rebellion, stealing, heroic thief, and one minor character poses as a mime wearing lipstick to define his lips against the white mime makeup and acts slightly effeminate.

Disney has been trying to bring the fairy tale RAPUNZEL to the big screen for years. With TANGLED, they have done so while preserving the folktale’s moral themes. The movie can even be interpreted in a Christian, redemptive, spiritual manner.

In the beginning, a drop of sunlight falls to the earth and becomes a glowing flower. A wicked old hag finds the flower and discovers that, if you sing to it, it can make you younger or heal you. She sings for her youth to be restored.

Meanwhile, the King and Queen are expecting their first baby, but the Queen has taken sick and may die in childbirth. The soldiers are sent to find a cure. Some of them surprise the old hag, who runs off, and so the soldiers find the flower. When they give it to the Queen, she is restored, and her daughter is born with glowing golden hair, having inherited the gift of the flower from the sun.

The hag is not about to give up so easily, however, so she steals the child and locks her in an isolated tower, telling her not to go out into the world because it is such a dangerous place. The only company Rapunzel has is a chameleon named Pascal.

Flash forward years later when Rapunzel is nearing her 18th birthday. A thief named Flynn Ryder and his two thuggish henchmen steal the Queen’s crown from the palace. Flynn is chased by the palace guards and especially by the head guard’s brilliant, crafty horse named Maximus. Flynn takes refuge in Rapunzel’s tower, only to be beaten up by Rapunzel wielding a frying pan.

Rapunzel finds the crown in Flynn’s satchel and hides it. She tells Flynn she will give it back to him if he can take her to see the mysterious lights that appear every year on her birthday. Flynn helps Rapunzel escape, but they are chased by the wicked hag, the guards, Maximus, the thuggish thieves, and others. Little do they know that the mystery lights in the night sky are lanterns released by Rapunzel’s real parents, to call their missing daughter home.

Will Rapunzel find out she is the missing princess? Will Flynn, whose real name is Eugene, survive when the whole world hates him?

TANGLED is well-crafted, beautifully made, funny, and exciting, especially the second half. The 3D is used to good effect without becoming overbearing.

There appear to be a couple minor plot problems, however. For instance, at one point the wicked hag teams up with the thugs and briefly tells them to wait before attacking Flynn. The wait goes on through several scenes of Flynn and Rapunzel enjoying their trip to see the lanterns. Countering this pause in the plot is Rapunzel’s delightful, soaring reaction to seeing the beautiful lantern display and the movie’s powerful, touching ending of sacrifice, reunion and restoration.

There’s also a moral conflict that’s not quite resolved positively. In a way, it seems as if Rapunzel is rebelling against her mother. That’s because the wicked hag, who pretends to be her mother, is not that wicked. If she had been a little bit more mean, there would be no confusion about Rapunzel’s decision to disobey her or rebel. Even so, the wicked hag is clearly deceitful and manipulative, however. Thus, although Rapunzel does not follow the commandment to honor thy mother and father to the letter, the filmmakers do show her being conflicted about her rebellion against her false mother. Also, although Rapunzel may violate one commandment, the wicked hag violates the commandment not to bear false witness.

The thugs at a local pub Rapunzel and Flynn visit have a little too intimate camaraderie. One of the pub goers is an old man dressed only in a diaper who’s inebriated the whole time. Another is a big thug who poses as a mime with lipstick and acts slightly effeminate.

Magic is a major plot point of TANGLED, but, in many ways, the story explicitly encourages viewers to see the magical flower as a spiritual gift from the “heavens” (according to a line in the movie) misused by the old hag and used properly by Rapunzel to heal Flynn’s hand in one scene and to solve the major plot problem at the story’s climax. There’s almost a sacramental quality to the power of the flower and Rapunzel’s glowing hair. Some lyrics in two of the movie’s songs seem to stress this sacramental quality. For instance, Rapunzel sings, “I see the light,” at one point. Later she sings, “Save what is lost.” In some ways, therefore, the movie points metaphorically to salvation from God through Jesus Christ, who is the “True Light” of the World that enlightens all men (John 1:9 of the New Testament). Viewed in this way, TANGLED can serve as a witnessing opportunity for media-wise viewers to point to God’s true saving Light, Jesus Christ, who heals and saves those who are lost, bringing them closer to God and closer to one another.

TANGLED has some cartoon action violence and narrow escapes. Most of it is very funny, however, especially Maximus and Pascal, who provide wonderful comic relief. And, some of the action is quite exciting, especially when viewed through 3D glasses.

All in all, despite its mixed worldview, TANGLED is a delightful, funny, exciting, and heartfelt version of the Rapunzel fairy tale. It will enthrall many families this holiday season and for years to come.