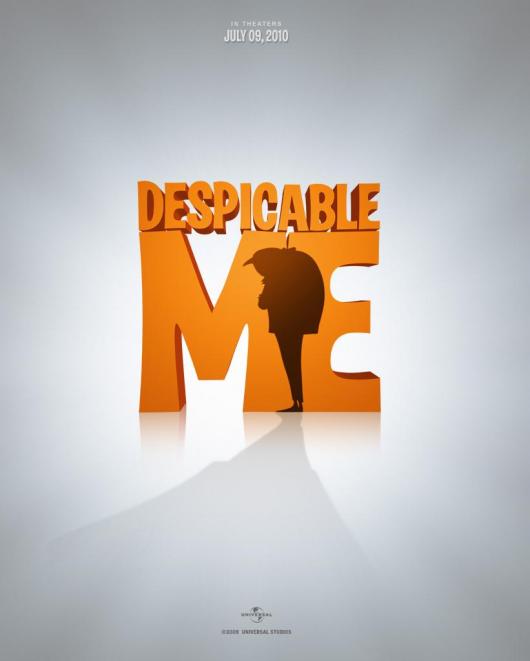 DESPICABLE ME is a very witty, heartfelt animated movie about an extremely sinful villain transformed by the prayers and love of three little girls. The villain named Gru, who wants to be the greatest thief in the world. He adopts three little girls, Agnes, Marge and Edith, so he can so he can sneak robot cookies into his rival’s lair and steal a shrinking ray gun. What Gru does not expect is that the three little girls steal his heart and transform him through their innocent prayer, love, goodness and kindness. The third act becomes a race to the finish, but the race ends in ways nobody expects.

It is seldom that a movie is clever enough to truly surprise the audience. In many ways, DESPICABLE ME does just that. Right at the beginning, the three little girls each pray a sincere prayer to be adopted. Clearly, their prayers are answered. Best of all, the heart of the story is a story of redemption, a story about the transforming power of love. There’s a lot of cartoon violence, slapstick comedy and some scatological moments, however, so parents need to be cautious.

(CCC, BBB, Ab, L, VV, D, M) Very strong Christian, redemptive worldview with very strong moral elements showing answered prayer and the triumph of love by three little girls over the sinfulness of man, with a strong Jewish mother figure seen in a negative but somewhat comical light; mild scatological language such as “poop” and “butt” plus scatological references such as nose picking, toilet pipes spray man, girls give mud pie to teacher; strong comic violence includes lots of slapstick and sometimes scatological violence such as a groin shot, a wedgie, falling from great heights, trapped alone on the moon, arsenal of guns shoot man, door falls on man, beatings, dog bites hand of man, shark attacks; no sex scenes or references but minions of villain kiss; no alcohol; implied smoking in scene where character is holding a cigarette; and, stealing but rebuked, lying but rebuked, lots of weirdness, villainous banker looks like a big pig, a slam at the Lehman Bros. company (which was at the heart of the 2008 financial meltdown).

DESPICABLE ME is a very witty, heartfelt animated movie about an extremely sinful character transformed by the love of three little girls. It is not designed to be a funny comedy but instead is a cartoon adventure that ends on an upbeat note.

The movie opens with the theft of the great pyramid at Giza. The world is worried about who stole the pyramid. The villainous Gru is upset that there’s another villain out there who is more dastardly than he is. He calls his hundreds of little minions together to pull off the greatest heist of all time: Stealing the moon! Gru believes the Evil Bank will finance his dastardly deed.

Meanwhile, three little orphan girls are selling cookies for their orphanage. Hard-hearted Gru sends Agnes, Marge and Edith away, so they go and visit nerd turned villain, Vector, who actually buys their cookies.

Gru finds out that Vector stole the Great Pyramid and tries to steal it from him, but everything he does fails. The president of Evil Bank, which used to be called Lehman Bros., tells Gru he’s not going to give him any more money until he shows the banker the shrinking ray machine. Regrettably, Vector steals the shrinking machine from Gru.

Gru adopts the three children so he can smuggle robot cookies into Vector’s lair to steal the shrinking ray gun. What Gru does not expect is that the three little girls steal his heart and transform him through their innocent love, goodness and kindness. Will Vector or Gru steal the moon? Who will be the greatest thief of all? What will happen to the three girls? The movie becomes a race to the finish, but the race ends in ways nobody expects.

It is seldom that a movie is clever enough to truly surprise the audience. In many ways, DESPICABLE ME does just that. Right at the beginning, the three little girls each pray a sincere prayer to be adopted. Clearly, their prayers are answered. The movie shows the selfishness and despicable qualities of every person’s heart, but it also shows the transforming power of love, namely the love of the three little girls. Therefore, the heart of the story is a story of redemption.

There are many witty elements to DESPICABLE ME and a few laugh-out-loud moments. However, the movie is more action adventure than it is funny. There’s a lot of cartoon violence. Some of it will be objectionable to discerning parents, such as the use of squid guns, ray guns, piranha guns, hitting, shoving, pushing, wedgies, and so forth. There’s also some scatological humor. Most of the violence, if not all, is very action oriented and not very scary. However, research shows that, when violence looks like fun and not scary, children are more apt to copy it if they have that propensity, so parents need to be cautious.

That said, the ending is so uplifting and redemptive that it overshadows the movie’s failings.