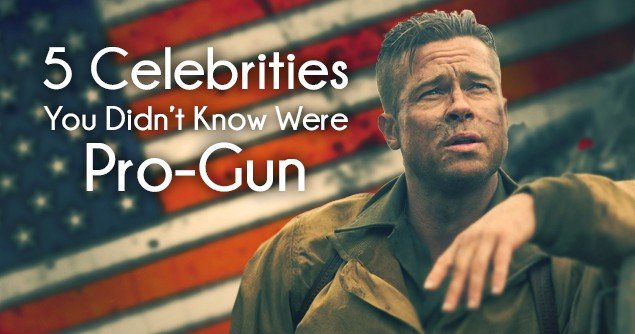 Hollywood is often thought of as a very left-wing place. Many celebrities are vocal about their opinions on a wide range of controversial topics, making it easy to recognize the political values of many of the biggest names in the business. Among more conservative celebrities, it may be obvious that they would be open about supporting their second-amendment right. While certain celebrities’ values may be more apparent than others, there are some shocking stars that believe in and support gun ownership—here are a few of them:

1. Brad Pitt and Angelina Jolie: One of Hollywood’s most high profile couples, two of the most successful people in the industry and private gun owners. In an interview with DailyMail, Brad speaks out about violence in movies and the effects that it has on viewers. He states that, “It is a violent world we live in. I don’t agree with trying to hide that or cover it up.” As an outspoken liberal, he opens up on the controversial topic and growing up around guns. He got his first BB gun in nursery school and by third grade, he had already shot a handgun. “America is a country founded on guns,” Pitt continues. “It’s in our DNA. It’s very strange, but I feel better having a gun. I really do. I don’t feel safe, I don’t feel the house is completely safe, if I don’t have one hidden somewhere. That’s my thinking, right or wrong.”

Pitt’s wife, Angelina Jolie, has similar views on the subject. In another interview with DailyMail, Jolie goes on to say, “Brad and I are not against having a gun in the house, and we do have one. Yes, I’d be able to use it if I had to.”

2. Johnny Depp: Depp being on this list may come as a surprise to some, but he isn’t as outspoken about his gun usage as others may be. In an interview, Depp recalls being taken out to practice shooting targets as a child. “We would just go out and line up a bunch of cans and shoot with rifles, handguns and at times, submachine guns,” he says. “It was a controlled atmosphere […]. I will most certainly take my kids out for target practice.”

3. Robert DeNiro: Another huge name on this list, DeNiro has been in many films that have required him to use a gun, so maybe not very surprisingly, he is in favor of private gun ownership. What may come as a shock though, is that he personally “[doesn’t] like a lot of violence.” In an interview with New York Magazine, DeNiro goes on record saying, “I always feel that violence should be done in a way that it’s believable, real and justified.” While he is a firm believer in gun ownership itself, he does think that there should be more restrictions on getting a gun. He continues by saying, “I think one thing that there should be is some regulation of guns. It’s crazy how almost anyone can get access to a gun. That itself is not so good.”

4. Steven Spielberg: Steven Spielberg is one of the most famous directors in Hollywood. He has made some of the biggest and most successful movies of all time, and he is also the owner of a very large collection of guns. Spielberg learned to shoot from his father when he was growing up in Arizona. He is well known for being a recreational skeet shooter. According to Shia LaBeouf, Spielberg has “The most ridiculous collection [of guns].” He continues, saying, “He’s got a gun for every movie he’s made. [He] gets them engraved. It takes like a year. He’s got the Jaws gun; he’s got E.T. He let me shoot with the Jurassic Park gun. He just got his Saving Private Ryan back from the engraver’s.”

5. Bruce Willis: Like DeNiro, Bruce Willis has had his fair share of big roles in which he was required to use a gun. Willis has openly supported Republican presidential candidates in the past, which makes his thoughts on the subject slightly less surprising than others on this list. He tells USA Weekend, “Everyone has a right to bear arms. If you take guns away from legal gun owners, then the only people who have guns are the bad guys.” Like Brad Pitt, Willis also disagrees with the idea that onscreen violence influences or affects viewers’ behavior. He says, “Anyone who goes to the movies knows that when you see someone killed on the screen, that actor gets up and dusts himself off after the take is over.”