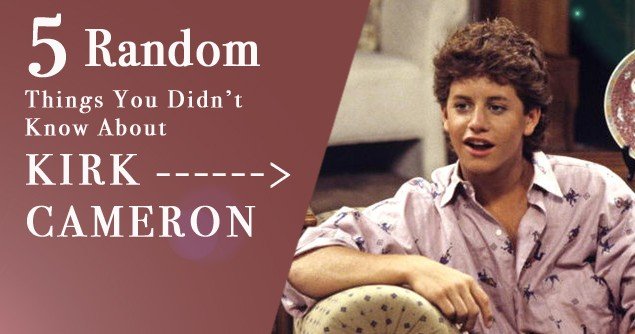 On Tuesday, September 24, 1985, my sister and I finished our homework, ate, showered, and plopped ourselves in front of the TV, eagerly awaiting the premiere of a new television sitcom called Growing Pains. The show featured the comical mishaps of the Seaver family. Families, like mine, tuned in every week to watch the bumbling antics of their eldest son, Mike Seaver, played by Kirk Cameron. For five years, this sitcom family entertained audiences everywhere. Then something happened.

At age seventeen, Cameron dedicated his life to serving God. Cameron said, “When I was about 14 years old, I had been working in the entertainment industry for a few years, and I got the part of Mike Seaver on ‘Growing Pains.’ Within a few years, it was a hit show. . . I was a famous person. I had everything that I wanted. But, I met a man, who was the father of a girl that I liked, and I got to talking to this man, and he said, ‘There’s still something that you don’t have, though, Kirk. You have a lot, but you don’t have the Lord.’ So, I went to church with them, and I heard the Gospel for the very first time. . . the man at the front said it was the Word of God. He explained that there is a God who made me and you, and everyone on this planet, and everything in this universe; and He sustains our life, moment by moment. He is a holy God. He is a pure God. He is a good, amazing, wonderful God.”1

Since then, Cameron has starred in Christian films such as Left Behind, Fireproof, Unstoppable, and Saving Christmas. Currently, he and his wife of over twenty-four years, Chelsea Noble, founded Camp Firefly (also known as The Firefly Foundation), an organization dedicated to bringing the light of hope to terminally ill children by helping them attend camping trips and events.

Here are five random things you may not know about Kirk Cameron:

Editor’s Note:  Michelle S. Lazurek is a pastor’s wife, bible teacher, mother, author and speaker. She is a member of the Advanced Writers and Speakers Association and has written articles on discipleship for places such as Charisma Magazine and Soli Gloria Deo Sisterhood. For more information, find her on Facebook at Michelle S. Lazurek or follow her on Twitter @mslazurek.