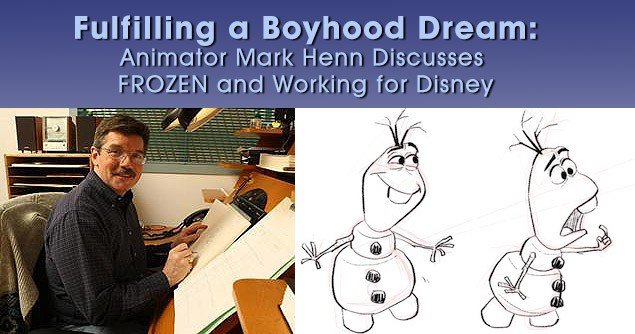 FROZEN is one of the best Disney princess movies in recent years. The story is about two sisters, Elsa and Anna, who were best friends. However, when Elsa cannot control her special ice powers, the two sisters are separated. When their parents tragically die, Elsa has to step up and become Queen. The two sisters have to be together again, but don’t know how to communicate properly. After getting in a fight, Elsa freezes the entire land and runs away. Anna knows her sister just needs to hear her apology, so she goes to find Elsa.

FROZEN has a wonderful message about family and sacrifice. MOVIEGUIDE® had the chance to speak to Mark Henn about his role in the movie as an animator. Henn has been with Disney Studios for 33 years and says he loved his experience working on FROZEN. Take a look at the interview below:

Movieguide®:  This is a different message for a princess movie.

Henn:  The story revolves around these two sisters and this family, which I think is very unique.

Movieguide®:  The message of love is better then most Disney Princess movies.

Henn:  You see a variety of types of love in this film. The love at first sight, [which] is very surface-oriented, not very deep, I suppose we have all experienced at some point, particularly in our younger days growing up. You may have met someone that you think you were in love with. Things happen, things change, and you learn later as you mature that really wasn’t love. Olaf the snowman represents very innocent childlike love. I don’t think you ever see Olaf mad at anyone in this film. He says he is all about warm hugs. He is a connection between Anna and Elsa because early on they built Olaf. He is a product of their love of each other as children. And, of course, sacrificial love, the ultimate love as we know. Christ explained to his disciples, no greater love as somebody to lay down their life for another. The film is filled with examples of how love is manifested today throughout our world and culture.

Movieguide®:  The sister relationship is wonderful.

Henn:  Elsa was so consumed with fear, and distrustful of not only her sister but everybody around her. That’s kind of an aspect of love because there is a risk involved.

Movieguide®:  How do you work with your team? Disney seems like a good team.

Henn:  Don’t be all to yourself. You have to be able to work and trust the people around you. You don’t have to be the answer to everything.

Movieguide®:  Did you always know you wanted to be in animation?

Henn:  This is a boyhood dream for me. It’s God’s blessing to allow me to have that dream. To be here now. This is my 33rd year working here at the company. It’s been better than anything I could imagine. I’ve seen the best days, I’ve seen some tough days, and everything in between. It’s been quite an adventure. FROZEN is just the most recent adventure.

Movieguide®:  Did any movie influence you as a child?

Henn:  One was CINDERELLA. I grew up always drawing and loved to draw. The idea of my drawings moving and create characters. . . just became my boyhood dream.

Movieguide®:  Knowing you were influenced as a child and knowing children are influenced by media does that influence your decisions?

Henn:  It’s a pleasure to work for a company that for the most part shares the same values as I do as a Christian. I think that’s important.