Fuller House and a New Age of Family Friendly Television (Or Is It?) 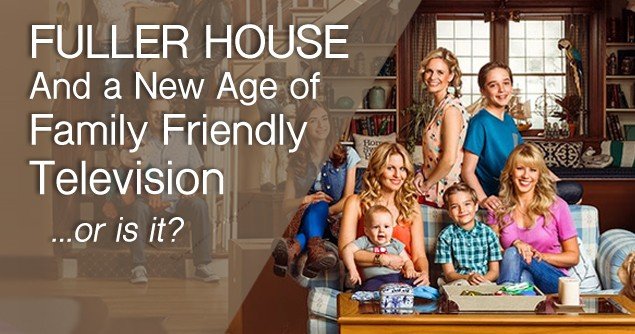 Like so many thirty something’s who grew up sitting in front of their televisions, waiting to watch Michelle put up her toddler hand and exclaim, “you got it dude,” Stephanie to declare “How rude!” or Jessie after kissing Becky respond “Have mercy,” have been counting down the days until Netflix premiered their new spinoff of FULL HOUSE aptly titled FULLER HOUSE on February 26th. I cleared my afternoon schedule, got my snacks ready and invited my ten-year-old daughter and eleven year old son to watch it with me, excited to share the same experience of watching wholesome family programs I had when I was a child. As someone who grew up watching TGIF, ABC’s Friday night block of family friendly shows, this has been a section of television that has been sorely lacking over the past decade. Just as I thought the days of squeaky-clean comedy were over, FULLER HOUSE appeared on the scene, in the hopes to restore that once long forgotten age.

Or so I thought.

From the first episode to the last, FULLER HOUSE encases every cheesy catch phrase we remember from FULL HOUSE in a highly inappropriate and all too familiar package. Candace Cameron Bure reprises her role as DJ Fuller, taking on the role Dad once had of a widow struggling to care for her three children, while enlisting the help of middle sister Stephanie, played by Jodie Sweeten and annoying neighbor Kimmy Gibbler, played by Andrea Barber. Bob Saget, John Stamos and Dave Coulier have guest starring roles, allowing the show’s plot to focus on the kids, with the dads taking a backseat.

Perhaps the show’s creators, Thomas Miller and Robert Boyett, added some edge for the older fans the show would attract for its nostalgic appeal, but along with that G rating comes adult content that definitely pushes those boundaries. For example, Stephanie takes on the uncle Jessie role, a DJ wanting to pursue a music career as well as the all night partying and alcohol consumption that life invites. During the years of FULL HOUSE, viewers knew Uncle Jessie also led a wild life, until Becky arrives on the scene and changes him into a sensible family man. However, families never worried about Jessie sneaking in the back door, obviously out all night and wanting to sleep off his alcohol- induced stupor. They never had to turn the channel to avoid seeing DJ put on a dress that leaves little to the imagination, or cringe as DJ launches into a two-minute dialogue about hiring the plumber to “fix her pipes.”

I get it. Life has changed, as evidenced by Stephanie’s constant selfie taking, DJ’s shameless plug to watch the View or Kimmy’s jokes about adultery and divorce like its no big deal, but for just a few hours, fans want to plunge themselves into a world with super cute kids, squeaky-clean images and where major dilemmas are solved with a hug, a moral lesson and a piece of pie at the dinner table. Unfortunately, fans of wholesome family viewing may have to wait a little longer.

So, Thomas Miller and Robert Boyett, if you were to ask me if I as an adult would tune in to watch next season’s installment of FULLER HOSUE, I’d quickly put my thumb up and say “you got it dude.” But, if asked if I’ll watch it with my family, I’d shake my finger and say, “you’re in big trouble mister.”