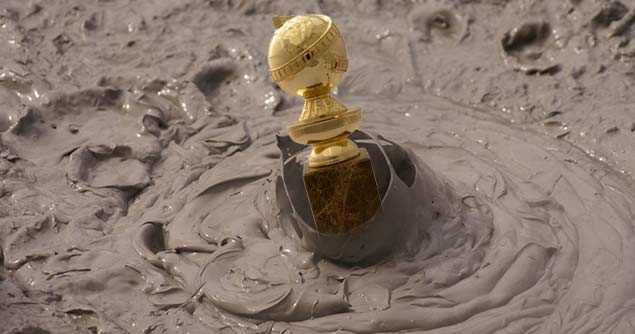 The Golden Globes has once again chosen to honor movies that don’t reflect that values or tastes of American audiences, or even moviegoers overseas.

Sunday night, the 88 or so members of the Hollywood Foreign Press Association, through the Golden Globes, awarded their favorite movies of 2013, but they clearly weren’t the public’s favorite movies.

To top it all off, the boring show contained inappropriate crude comedy and lots of narcissistic, Hollywood insider, self-congratulation.

AMERICAN HUSTLE took home best Musical or Comedy. While it’s earned $118 million worldwide, it has largely disappointed audiences with its unsympathetic characters and vulgar storyline. AMERICAN HUSTLE garnered a measly “B+” with the audience poll CinemaScore, the same rating that recent flops such as 47 RONIN and GRUDGE MATCH received. While the star studded cast may have attracted some viewers to the theater, the movie itself is uninspiring and left a disconnect with a large portion of America.

For best drama, 12 YEARS A SLAVE won the night. While the movie holds a strong “A” grade among audiences thanks to an uplifting ending, the movie’s brutality hindered a successful run to reach a large American audience. To get to any positive elements, viewers are forced to watch horrific events portrayed with little restraint, nearly contradicting the very anti-violent message the movie tried to tell. 12 YEARS A SLAVE grossed $51 million worldwide, when it likely could have made much more.

Other critical darlings that won awards included a Best Actor win in a Musical or Comedy for Leonardo DiCaprio in THE WOLF OF WALL STREET. Martin Scorsese’s derivative movie is one of the least liked movies in theaters currently, with a “C” grade on CinemaScore. MOVIEGUIDE® has heard story after story about moviegoers getting disgusted at WOLF’s first couple miniutes and walking out of the theater. One first-hand report says that an older couple walked out of the movie and went to see FROZEN instead.

Instead of paying their money for Scorsese’s pornographic movie, why didn’t these people just read MOVIEGUIDE®’s reviews at www.movieguide.org and spend their money more wisely???

It’s clear that most movie critics in Hollywood don’t have a pulse on what Americans like and don’t like. If they did, movies with positive, uplifting content and values like GRAVITY, IRON MAN 3, 42, or MAN OF STEEL would receive all the acclimation, nominations, and awards.

In that light, the only good news of the evening was the animation category which featured three wonderful, popular movies, with the blockbuster FROZEN taking the award.

Ultimately, it’s movies like FROZEN, DESPICABLE ME 2, and THE CROODS, which reach large audiences with larger-than-life, inspiring messages, that deserve commendation, celebration, and your entertainment dollars.

To help you pick the good from the bad, please visit us daily at www.movieguide.org.

Note:  For more information, or to arrange an interview with Dr. Ted Baehr, founder of CFTVC and author of THE CULTURE-WISE FAMILY, HOW TO SUCCEED IN HOLLYWOOD (WITHOUT LOSING YOUR SOUL), and many other books, please call 1-800-577-6684.