The Censored Movie Not In Theaters This Christmas 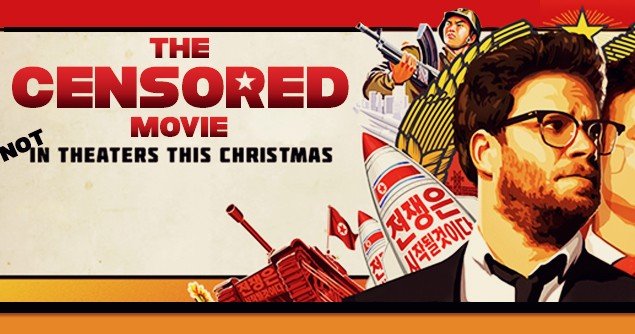 Nothing new under the Hollywood Sun:

The Censored Movie Not In Theaters This Christmas

It is with a sense of “deja vu” that we watch the spectacle of threats, cowardice and censorship on display at SONY PICTURES. Yes, there’s nothing new under the sun.

Political censorship, blackmail and intimidation are as old as civilization and already have a well pedigreed history in Hollywood. The examples are so rife it would take a shelf full of books to expose the whole sorry litany.

There’s the grim, absurd tale of the epic movie “1776,” produced in 1914. Only because the “bad guys” of this movie are British, the US government seized the prints, prevented the movie’s release and arrested the director. Yes, you read that right. The director of the movie spent the duration of World War One in prison accused and convicted of sedition, because his patriotic film was deemed to undermine the war effort against the “evil” Germans.

Then there’s the deplorable record of intimidation, acquiescence, self-censorship and outright censorship in the Thirties, when a high-ranking Nazi official well ensconced in Hollywood regularly communicated with the studio chiefs, advising them on what Herr Hitler would or would not like to see in the movies. This almost unbelievable Grand Guignol is documented in Ben Urwand’s recent book, “The Collaboration.”

From the other end of the political spectrum, the Soviet Union infiltrated its agents into Hollywood. Some scripts in development and production at major studios were actually vetted by thuggish members of labor unions outside of California, otherwise not even connected with moviemaking. What mattered was the party line, that party being the CPUSA. These shenanigans are brilliantly documented in the book, “Red Star Over Hollywood” by Ron and Aliss Radosh.

Bottom line, some films were killed in development or on the eve of production only because of pressure from foreign governments or their agents.

More recently, the mini-series “The Path to 911” was only a month prior to broadcast on ABC when the Clinton political machine exerted both public and behind-the-scenes pressure to shut it down. Former Secretary of State Madeleine Albright, former National Security chief Sandy Berger, Bill Clinton himself – all went on national TV denouncing the film and more significantly, pressuring the network and its parent corporation to stop its release.

Now, lets put this in perspective. This is a former US president demanding the outright censorship of an American television program! The head of ABC did as he was pressured…mostly. The mini-series did air, but only after the producer and director were compelled to cut out scenes in which Sandy Berger gives the order to special forces to stand down – to not shoot when they had Osama Bin Laden in their crosshairs. In other words, had that order been given there’s no 9-11.

But its worse. Immediately following the one and only airing of the re-edited version of the miniseries, the movie was placed in deep freeze. No video, no DVD, no online streaming – nothing. Its still under lockdown. The only way to see it is via pirated copies outside the United States. This movie was not censored or threatened by North Korea or some rogue cyber terrorists – it was censored and shut down by ABC under threat and duress from Bill Clinton and his political entourage.

I admire George Clooney for the courage he is showing in defiance of SONY’s hackers, but where was he when the same thing was done to ABC by a former president of the United States?

Those who wish to silence the freedom of expression, whether it be manifest in silly, raunchy comedies like “The Interview” or serious political dramas like “The Path to 9-11” are on one side of history – the side which seeks to dominate, stifle and control. The rest of us are on the other side – or at least as filmmakers and truth-tellers we should be. We must be forever vigilant, forever defiant and forever faithful to those whose voices must be heard.

Editor’s note: Ron Maxwell is the MOVIEGUIDE(r) Award-winning director of GETTYSBERG and GODS AND GENERALS. For more information, please go to: https://www.facebook.com/ron.maxwell.378

This article is reprinted by permission.