Matthew McConaughey Speaks Out About His Faith 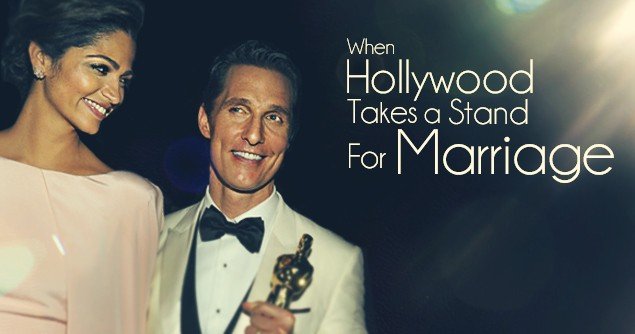 When Hollywood Takes a Stand for Marriage:

Matthew McConaughey Speaks Out About His Faith

A few months ago, The Huffington Post published an article on their website titled, “10 Reasons It’s Totally Fine to Never Get Married.”

Many of the reasons given are rather ludicrous, and unbiblical to boot.

For example, take Reason #1, “Most people aren’t in a hurry to get married anymore,” which encourages singles to remain unattached simply because everybody else is doing it. Or, look at Reason #8, “These days, a happy marriage requires a serious commitment of time and energy that can be hard to maintain,” which sounds more like pure laziness than a real reason.

The above examples, and many others, fly in the face of biblical teachings on what the article calls an “outdated institution.” This is the sort of spiritual warfare the body of Christ is up against.

In the New Testament, in 2 Timothy 3:1-5, the Apostle Paul wrote to a young disciple named Timothy, warning him about difficult, perilous times in the last days in which men and women would have corrupt minds and be lovers of self. Seven hundred years before Jesus’ birth, Isaiah prophesied that during the end times, evil would be called good and good called evil.

Marriage, it seems, has become one of the chief foundation stones of our society – and God’s Design – that’s being shaken by the corrupt minds and perverse perspectives of our generation. Paul’s 2,000-year-old words to Timothy speak directly to us today:

“But you must continue in the things which you have learned and been assured of, knowing from whom you have learned them. . . . All Scripture is given by inspiration of God, and is profitable for doctrine, for reproof, for correction, for instruction in righteousness, that the man of God may be complete, thoroughly equipped for every good work” (2 Timothy 3:14, 16-17).

If we as Christians fail to spend time in Scriptures, the inerrant and unfailing Word of God, we will be ill-equipped to stand strong against the world’s attacks on biblical values and views regarding topics like marriage and divorce. Which brings us to The Huffington Post’s ninth reason that “it’s perfectly fine to never get married” because “plenty of marriages in this country end up in a divorce anyway.”

Number nine seems to be the most reasonable of the bunch, mainly because our nation’s divorce rates, even among Christians, are dishearteningly high. Professor Bradley Wright, a sociologist at the University of Connecticut, found that 38% of regular church attendees have been divorced, a statistic not much lower than the 40% of young couples marrying for the first time who are expected to divorce, according to www.divorcesource.com.

And then there’s Hollywood, a place where marriages bomb more often than B-movies at the box office. A place where celebrities seem to have a new mate every time they hit a new film set.

Not to point the finger at stars who have accumulated more exes than Oscars, but I think we can all agree that Hollywood is probably one of the last places we’d tell friends and family to look for marital role models. Besides, as Jesus says in Matthew 7:5, we all have planks in our eyes, but it’s worth reminding ourselves that our culture, like it or not, does look to Hollywood for more than entertainment. Indeed, many people often become so intrigued by actors’ and actresses’ lives off-camera that they spend time reading magazines and watching television shows that highlight – and often even glorify – everything about their lifestyles, from what they’re wearing to whom they’re marrying, and for whom they’re ending their marriages.

“Divorce” is so commonly read and heard about that, sadly, our culture is becoming more and more disenchanted with the idea of marriage, as evidenced by articles like the one featured in The Huffington Post.

Despite this gloomy, do-as-you-please, noncommittal climate, however, it’s important for Christians not to focus solely on the darkness. Bring awareness to it, yes. Guard against it, of course. But let’s not become so consumed with pointing out society’s failings that we neglect to recognize and commend its successes. When those given a lofty platform say or do something that aligns with Scripture and the teachings of Jesus, it behooves us to bring attention to them and show others, particularly our youth, examples of morality in high places.

Matthew McConaughey, an actor who received both a hefty dose of criticism and acclaim for thanking God during his Academy Award speech earlier this year, recently spoke about his faith in relation to his marriage to Camilla Alves.

Mr. McConaughey refused to regard marriage as merely “the thing to do”:

“I wanted to really want to,” the actor said. “You know, I didn’t want it to be just a destination; the fun is that we’re on the adventure together.”

At the ceremony, the couple selected Bible verses that McConaughey said “moved” and “[spoke to]” he and his wife as a couple. One such verse is Matthew 6:22, which the actor has engraved on his wedding band:

“The eye is the lamp of the body; so then if your eye is clear, your whole body will be full of light.”

The world is full of lures and snares, all strategically planned and placed by the Enemy to distract our eyes from Christ. When we look upon them for too long, our eyes become diseased and our lamps grow dim. Given the increasing popularity of social media sites, such as Twitter, Facebook and Instagram, as well as our culture’s idolization of Hollywood stars, it’s easy to fall prey to secular notions of happiness and success and if and how marriage belongs in this postmodern age.

Marriage and the family unit are under attack, perhaps now more than ever before. We would be wise to heed Paul’s words to Timothy by searching the Scriptures for God-breathed truth concerning marriage and relationships. Otherwise, we will be ill-equipped, defenseless soldiers trudging through a virtual war-zone of deception, false doctrine and interminable darkness.

Actors such as Denzel Washington, who has been married to the same woman for over 30 years, and Kirk Cameron, who won’t kiss anyone but his wife on camera, are among the few in Hollywood who appear to be taking the sanctity of marriage seriously. As the world becomes more antagonistic toward marriage, it’s incumbent upon us, citizens of heaven and not the world, to encourage believers and non-believers alike that what God ordained as holy and good does, and always will, prevail.