How YOU Can Help Keep Little Girls from Being Murdered 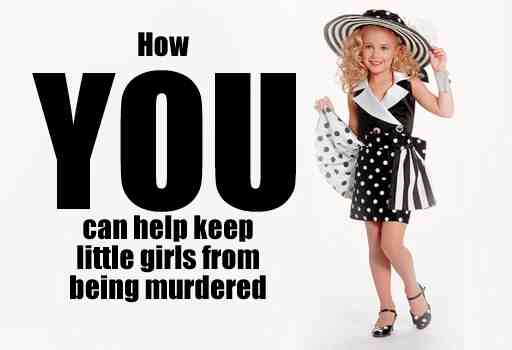 Young JonBenet Ramsey was not murdered by an angry classmate in her first-grade class. She was raped and murdered by someone who found her sexually desirable.

In America, it’s politically correct to pretend people are born with sexual desires they don’t choose.


Those with a Christian worldview understand that we are all born sinners and that Satan wants to keep sinners busy in their sin by luring them into addictions and horrible habits. Pornography feeds lust. The more you feed lust, the bigger and nastier it gets. Sexual appetites can go in unpredictable directions. Some people are drawn into homosexuality, some into pedophilia and some, like Charles Bundy, into a frightening mix of sex and violence.

The time to do something is not after little girls bodies are dumped in the woods. One or more children pay a horrible price for every man put behind bars for sex crimes. The challenge is to reduce the number of boys headed toward becoming child killers. The “sexual revolution” promoted by Hugh Heffner and Hollywood has been a costly disaster. It’s time for a counter-revolution – a revival of modesty, decency and righteousness.

Such a revolution will not be enforced by government edict. It must come by personal choice – including YOURS.

The government can lock up sex offenders. It cannot convince a young man not to lust.

Men with pedophile tastes can be delivered from their addiction. Boys can be raised to avoid sexual addictions. The early church revolutionized the world, not by passing laws, but by seeking and obeying God. Many people were so impressed by what they saw and they chose to give up immoral ways in favor of righteousness.

The better Christians are at being Christ-like examples, the more people who will be drawn to follow Jesus. The more who claim to be Christians, but who live like everyone else, the more boys who will become pedophiles and the more little girls who will wind up as bodies in the woods.

How you use your television remote and your box office dollars helps determine what Hollywood will make next. When you support the sexual revolution with your time and money you enrich and encourage those who are creating the next generation of pedophiles.

Are you willing to help protect little girls by making righteous entertainment choices?

Stop watching THE BACHELOR and DANCING WITH THE STARS (in sexy little outfits). Give control of your remote to the Holy Spirit. Pray about what to watch and what magazines to subscribe to. Pray for those trapped in sexual addictions. Pray for boys and encourage them to avoid pornography.

If Christians will be who Jesus wants them to be, fewer young girls will be molested and murdered.