Imagining Heaven in HEAVEN IS FOR REAL 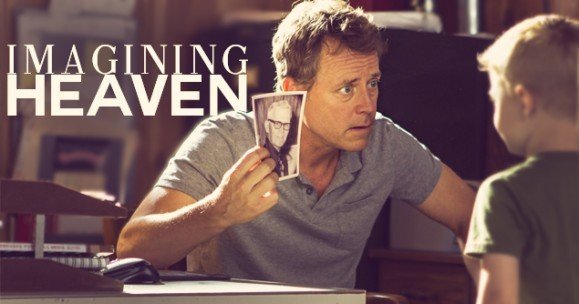 Imagining Heaven in HEAVEN IS FOR REAL

That is one of the greatest questions faced by mankind, as nearly everyone on the planet believes in some form of the afterlife, even as different religions think of it and even name it in different ways. Even among Christians, the stories of what people who have had near-death experiences have seen have varied greatly.

In 2010, a small-town Nebraska preacher named Todd Burpo took the world by storm with the release of his book, HEAVEN IS FOR REAL, which claimed to detail the true story of what happened when his four year old son Colton believes he left his body during an emergency appendix surgery, visited Heaven and returned. The book became a massive No. 1 hit on the New York Times best-seller list, selling more than 10 million copies worldwide while being translated into 35 languages.

That kind of success stirred the attention of Hollywood, where veteran movie producer Joe Roth decided that the Burpos’ story was compelling enough to get behind. Lining up an impressive cast led by Greg Kinnear, who has appeared in several MOVIEGUIDE(r) Award winning movies, and Thomas Haden Church and Emmy winner Margo Martindale, who lined up to work on a screenplay co-written and directed by MOVIEGUIDE(r) Award Winner Randall Wallace of BRAVEHEART, WE WERE SOLDIERS and SECRETARIAT fame, the movie version of HEAVEN IS FOR REAL quickly stood head and shoulders over most of the Christian-themed fare released by Hollywood in recent years, often with low budgets and mostly unknown actors.

The fruit of their efforts hit theaters this Wednesday, when HEAVEN hopes to ride Easter-weekend interest to miraculous box-office results. Hitting wide release amid a wave of Christian and biblical-themed hits including GOD’S NOT DEAD and SON OF GOD, it does stand a good chance of making this truly be the Year of Our Lord in theatres.

“Randy’s themes of love, honor, courage are in all his movies, and if anyone could make this story accessible to the audience, I knew it would be him,” says Kinnear, speaking about the movie in which he plays Todd Burpo on a recent Saturday at the Beverly Hilton Hotel.

“Love runs through this movie like water. It’s just there. Meeting Todd, one of the things I was taken by was his love for his children. Certainly, to see him go through what he did and face what he did, we wanted to trace that relationship between him and Colton as best we could.”

Getting the tone of that core relationship right, while also clearly showing that Todd Burpo and his family were not uptight stereotypes, came from Wallace’s frequent conversations with Todd during the writing and filming of the screenplay. That personal attention to detail also served to make Kinnear confident that this was a project worth shooting, rather than poorly funded religious propaganda.

“I guess I might have agreed with plenty of folks a few months ago, but now it’s, ‘You’re doing another one of those movies?’ They’re definitely happening now, and whether it’s a trend or coincidence I just don’t know,” says Kinnear. “The subject matter to this movie is tricky. I wasn’t familiar with the book when I heard about the story and the script, but I think it did a nice job of bringing you into the story. Even though Heaven is in the title and the movie, it doesn’t over serve with specifics of what Heaven was like. It avoids that pitfall and tries to tell you this movie covers the events of this family as best as it can.”

Indeed, Wallace and his band of actors had to choose wisely regarding what they could show about Heaven, both due to the practical reasons of fitting an earthly budget and because dwelling on the details of what Colton saw for too long would knock the movie’s dramatic elements off-balance. What remains in the final movie is a vision of a glowing chapel with levitating angels floating in space, and a string of miraculous encounters with relatives that Colton never would have seen in the real world.

In fact, it’s those encounters that finally convinced Todd that his young son wasn’t crazy or inventing his stories about Heaven. There were just too many facts he was sharing about people who had died well before he was born.

“He’s not a dumb guy, and no father wants to put his son in jeopardy but in going public with this story he was in choppy water doing that,” says Wallace about Todd Burpo. “Greg felt strong about the subject matter and that’s why he did it but I think he handled it honorably. It’s not like his son says everything you’ve been talking about is consistent with what I saw and Todd high-fives him back. I think it’s a very hopeful story as well, regardless of where you’re at on the faith spectrum and the movie does a very nice job of honestly giving you a front row seat to watch how this family dealt with these events.”

The Burpos have handled their newfound success well, by all accounts. While their church attendance boomed, requiring them to hire 13 staff members in addition to heavily funding several children’s programs, they have also tried to stay grounded in the roots of their usual daily lives.

Ultimately, it’s that universality that Wallace is hoping will prove to be the film’s strength with audiences.

“I told Joe Roth the movie was like FIELD OF DREAMS or THE SIXTH SENSE, that I saw it in those terms and they loved that. Not as a preachy movie but in the experience of seeing movies,” Wallace says. “I expected my church friends to like it, but I intentionally invited atheist friends …, and they were as moved as the Christians were and that to me was incredibly gratifying. They felt the doubts made it authentic, and they came out of the movie with a sense of joy and gratitude.”

HEAVEN IS FOR REAL opens nationwide on Wednesday. You can read MOVIEGUIDE®’s review of the movie here.