Made in America: Miley Cyrus, Justin Bieber, and the Modern Celebrity Machine 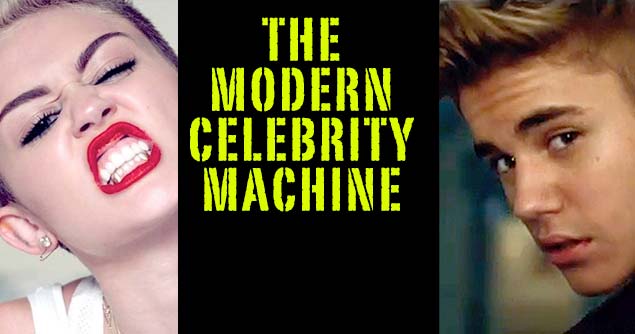 “It kind of just opened so many doors for me to be like, alright, I already p*ssed you off as much as I possibly can. So, now I can kind of just be freer and kind of do whatever it is that we want to do.” – Miley Cyrus, on her performance at the 2013 MTV Video Music Awards

As the late Art Linklater used to say, “Kids say the darnedest things,” don’t they? Especially youth who had platinum records before they had driver’s licenses.

In case you missed it, 2013 was a rather eventful year for America’s two favorite teenyboppers, turned superstars, turned role models, turned cautionary tales.

Let’s start with Justin Bieber. Between flipping off paparazzi, urinating on a poster of Bill Clinton, spitting on fans, fighting with neighbors, and offending half of South America, The Biebs ensured that he never spent more than 10 consecutive days off TMZ’s home page. He even managed to somehow get himself in hot water over comments he made about Anne Frank. (Anne Frank!)

And, Miley? Well, you may have heard. In less than four minutes on a Sunday evening in September, the artist formerly known as Hannah Montana managed to single-handedly bring MTV, the Internet, and most of Western civilization to its knees.

The public response to Miley’s performance and Justin’s antics has been broadly critical and oddly parental as every blogger, cultural watchdog, and parent in America has rushed to express their righteous concern for the careers and souls of Ms. Cyrus and Mr. Biebs.

Amid the finger wagging and relentless “tsk-tsking” that cluttered airwaves and news feeds in 2013, a single narrative began to emerge:  someone failed these two. Maybe it was their parents, or their management teams, or their friends. Maybe it was Christians, or “Hollywood,” or the entertainment consuming public at large. Who knows? The point is, these were good children. These youth wanted to do things the right way. We wanted them to do it the right way, and then somewhere along the line, they veered wildly off track.

This is not to remove the culpability of Justin or Miley in the decisions they have made. These are, after all, their decisions we’re talking about; their careers, their bodies, their parties, and – as Miley reminded us in “Can’t Stop” – they think they can do what they want with them.

Even so, what choice do they have when faced with the prospect of “growing up” in an industry that equates edginess with adulthood and conflates maturity and sexual experience into the same thing?

There is a well-defined path for child stars interested in becoming grownup stars. Along this path, scandal is a career move. Sex is sophistication. Bad relationships strengthen their Wikipedia pages, and compromising photographs add Twitter followers. Innocence and lightness, meanwhile, are the trappings of youth, and should be avoided wherever possible. None of this is especially novel, nor is it unique to Miley and Justin.

How does Taylor Swift transition from a high school sweetheart into a strong and independent woman? She replaces the T-shirts with cocktail dresses and starts writing lyrics like, “I’ll do anything you say, if you say it with your hands.” How does Kristin Stewart distance herself from her years spent in TWILIGHT teenybopper purgatory? She cheats on her boyfriend and gets naked ON THE ROAD.

Regrettably, it works! It worked for Christina; it worked for JT; and, it’s working for Miley and Justin. Earlier this month, Miley was named MTV’s Artist of the Year. She was a finalist for Time Magazine’s Person of the Year before getting leapfrogged by Pope Francis, who – surprisingly – didn’t twerk anything last year.

Justin, meanwhile, is preparing to debut a new movie on Christmas Day.

This is the paradox of the modern celebrity machine. Every meltdown, every misstep, every protruding tongue, and every careless word is recorded, catalogued, replayed, and critiqued. As the shock and disappointment mount, the albums climb the charts. (Note:  “Bangerz,” Miley’s latest album, has sold more than 500,000 copies in the US alone since its October release.)

Now, again, we’re not trying to let either artist off the hook here. Despite their relative youth, both Miley and Justin are savvy industry veterans who play an active role in crafting their respective images, but consumers have created strong incentives for celebrities who behave badly.

As we read the fallout from Justin and Miley’s respective “meltdowns” this past year, we are reminded of the scene from GLADIATOR when Maximus – having vanquished all challengers in the arena – throws his sword and shouts derisively at the crowd, “Are you not entertained? Is this not why you are here?”

Fallen people (otherwise known as sinners) have a voracious appetite for scandal, the more salacious the better. They want it; they chase it; and,  when none can be found, they create it. So, after we’ve throw our hands up in disgust at the latest fall from grace of our latest celebrity plaything, we should at least pause to ask, “What did we think was going to happen?”

And, why are we still sitting in the arena?