Marvel’s DOCTOR STRANGE: A Dangerous Introduction to the Occult 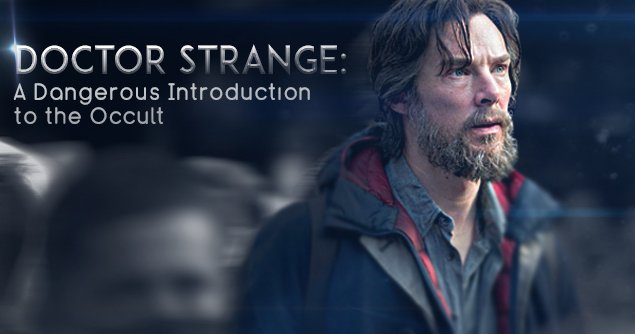 Marvel’s DOCTOR STRANGE:  A Dangerous Introduction to the Occult

By The Editorial Staff

Update: Within one day of DOCTOR STRANGE’s release, Will Smith’s son Jaden Smith revealed on Twitter his love for the movie’s Occult/Hindu themes. “Just watched Doctor Strange” he tweeted to his 5.8 million followers, “I’m completely blown away, and I’m going to dedicate the rest of my life to those practices. Thank you”.

“It’s just a movie” may be the most common phrase MOVIEGUIDE® hears from those who don’t want to practice media discernment. However, as the research has shown through the years, and as Hollywood already knows, movies are never just a movie, they’re an opportunity to have millions of people view the world in a different way. In fact, if the story is told with excellence in a compelling way, it can even be more influential in changing the way we view the world and the ways we form our worldviews, the beliefs and values, by which each of us live.

The power of the mass media to affect or change our hearts, minds and behaviors is not inherently bad. Actually, this power is why MOVIEGUIDE® works behind the scenes with Hollywood studios, producers and filmmakers to encourage and train them to make sure the worldviews presented in their movies are positive, and to encourage biblical values like truth, love, compassion, sacrifice, justice, and forgiveness, all of which can have lasting impacts on our culture and society. Beyond that, we want Jesus Christ to be glorified and proclaimed, because He IS the Way, the Truth, and the Life.

Some movies, however, not only distract some people from the Truth, but introduce completely new paths for people to follow that will lead them away from eternal life with Jesus Christ and away from loving their neighbors as themselves. Sadly, Marvel’s DOCTOR STRANGE is one of those movies.

While Doctor Strange was first introduced into the comics in 1963, this is his first appearance in the Marvel Cinematic Universe. It’s also Marvel’s first major movie introduction of the occult and other false spiritual notions.

DOCTOR STRANGE is about an egotistical neurosurgeon, Dr. Strange, played by the talented Benedict Cumberbatch, who’s injured in a car accident and becomes unable to perform surgeries as a doctor. This accident throws his whole identity into crisis mode. Spending every dollar he has looking for a solution, Dr. Strange finds himself in Katmandu, where he meets a sorcerer called The Ancient One, who eventually trains him in the mystic arts through occult means and reveals to him a spiritual dimension that has its own evils threatening the world’s existence. Eventually, Strange becomes a warrior sorcerer, who’s taught to kill people rather than heal them.

Before we think DOCTOR STRANGE is just a “harmless” movie that “won’t introduce kids into the occult,” a quick Internet search reveals that the DOCTOR STRANGE storyline involving the mystic arts has in fact and indeed affected people for the worse, not for the better.

One Amazon review from a fan criticizes Harry Potter and Dungeons and Dragons for not being close enough to real occultism. S. Gustafson also writes, “If you want to learn real black magic spells that actually work, you should start here [with DOCTOR STRANGE].” Others were inspired to explore drugs.

DOCTOR STRANGE the movie is actually a very well made movie, which makes it that much more enticing, not just to children, but to anyone seeking to leave this “dimension.” It positively presents an occult worldview that all true Christians would recognize as destructive. People have already been swayed by this comic storyline, and many more people will also be swayed after the movie is released to the masses.

It’s time we take a proactive stand on what we find tolerable or harmless, especially in the movies to which our children and grandchildren expose themselves. Just this year alone, KUNG FU PANDA 3 very blatantly preached Buddhist teachings, and KUBO AND THE TWO STRINGS encouraged children to pray to their ancestors while having the hero make the loony comment that “nothing is eternal.” Fantasy is one thing, but creating stories with worldviews that are overtly antithetical to biblical faith in Jesus Christ shouldn’t be treated lightly, much less ignored.

Instead of seeing movies like DOCTOR STRANGE and exposing ourselves and our families to false, dangerous occult teachings and practices, we need to support great movies with Christian and Christian friendly worldviews and messages like HACKSAW RIDGE, including taking the whole family to see TROLLS this coming weekend, so that we can think on things that are good, true and beautiful (Philippians 4:8).