NOAH: Outstanding. . . and Not for Everyone 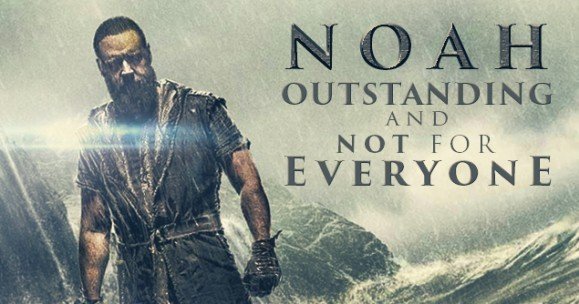 Auteur filmmaker Darren Aronofsky may well have produced his masterpiece in Noah, a cinematic and – astonishingly, for a self-proclaimed unbeliever – theological tour de force.

Many of Christendom’s best and brightest, from Movieguide’s Ted Baehr to Focus on the Family’s Jim Daly, have vouched for NOAH’s orthodoxy. Others have certainly disagreed, such as Brian Mattson, who thinks the whole production is a big Gnostic head fake. And maybe it is (though the case is not ironclad); but if so, the joke is on Aronofsky.

Aronofsky’s first and brilliant insight, too often lost on the Sunday School flannel graph, is in the set-up:  the apocalypse is the Fall, not the Flood. By Noah’s time, Romans 8:19-22 is at its uttermost. Sin – an all-encompassing, literally cannibalistic sin – has overcome virtually all things, just as Genesis 6 records. The environmental waste depicted, today best seen in countries like North Korea or the old Soviet Union which, as in Tubal-Cain’s kingdom, deify the leader and assert strength as the only right, is at once both real and symbolic, very contemporary and yet only superficially political.

This grinding nightmare has driven the remaining righteous – one small family, of the faithful line of Seth – to live on the edges of society, not as survivalists (as some reviewers have absurdly claimed) but as outcasts, like Lot upon escaping Sodom, Moses in Midian, Elijah hiding from Jezebel, or the young Christ in Egypt.

The sin is against their Creator (whom I, like many of you, usually but not always call “God,” an old English word never uttered by any Biblical figure). This is another profound point the movie never lets go:  literal six-day creation, by a Creator whom all people of Noah’s time acknowledge has done this in their very recent past. Some have attacked the movie for depicting “theistic evolution”; but it’s a funny kind of “evolution” that takes place in 144 hours. And Aronofsky shows the literal Adam and Eve, walking in purity before the Fall:  luminescent, in fact, which Mattson sees as proof of Gnosticism, but which most viewers probably took as a simple special effect, hiding their nakedness and signifying their sinlessness (although some might have remembered Moses in Exodus 34, or Jesus’s Transfiguration, or His words in Matthew 13:43).

Certainly no one in Noah’s time is luminescent (well, except for “the Watchers,” who can be interpreted as a wholly-invented plot device, or as Aronofsky’s take on the Nephilim from Genesis 6:  the movie does not say, and it really doesn’t matter). All, indeed, are fallen; and this becomes the focus of the last third of the movie.

For Noah has understood things correctly. When Grandfather Methuselah suggests that the world will end in fire, Noah responds “No. Fire destroys. Water cleanses.” The Flood is meant to wipe away the wicked and all their works; but God intends to redeem the Creation as a whole. Though horrified at the scope of this judgment, Noah grasps its justice and its logic. And, Noah spends the first two thirds of the movie faithfully not only obeying but leading his family to trust God for all their needs, needs God faithfully and consistently meets.

Even after Noah loses it.

Chesterton said that the madman is not someone who loses reason, but rather one who loses everything except reason. Noah, in Aronofsky’s construct at least, realizes that his and his family’s “righteousness is as filthy rags,” and that preserving them will preserve sin into the new world. Indeed, he comes to believe that God has rescued him and his just to save the “innocent” animals and then to peaceably die, a belief greatly reinforced by the seemingly premature arrival of the Deluge and closing of the Ark, with just two women, both barren, aboard.

His belief turns malignant once he learns his daughter-in-law has miraculously conceived twin girls. Rather than seeing God’s gracious deliverance, Noah reasons that what Adam began in the Garden is beginning again, indeed that he is in danger of becoming Adam in the Garden. He logically concludes he must stop this, even if he must slay his grandchildren (noticeably foreshadowing Abraham, whose life Noah’s overlaps by 20 years, with Isaac). The movie labors over this, admittedly much too long.

But is Noah wrong? Again, regardless of Aronofsky’s motives, his message is flawless. Logically and legally, none are righteous, and sin demands death. This is the Christian Gospel:  that our sin is so serious and God’s love so great, that He sacrificed His only Son to pay our debts, that we might not only live but live adopted as sons of God, co-heirs with Him Who gave His life for ours. God’s solution was not to destroy and start over (though He justly destroys some), but to regenerate and make new creations of all who call on His name.

Is this not exactly what Aronofsky has depicted?

Faithful Noah, seeing the need for God’s justice but not grasping His grace, attempts to take judgment to its logical conclusion; but God, placing “nothing but love” in Noah’s heart, prevents this, delivering his entire little family by grace, a grace that ultimately requires the Cross. God pays the price of His own mercy, personally.

In time, Noah comes to see this grace, not that Aronofsky’s Creator hasn’t given us plenty of signs along the way, from the daughter-in-law’s miraculous healing to the dove’s appearance at the moment of the twins’ deliverance to the ending’s conclusive rainbow. But here too, Aronofsky is a better theologian than perhaps he meant to be. He depicts the rainbow so as to confirm that God’s deliverance of Noah and of humanity was intentional all along, not merely a happy accident, or worse, a thwarting of His “true” plan.

In this, Darren Aronofsky writes his masterpiece. What he has said to us – whether or not he meant to say it – is that our Creator is one of justice but also redemption; that sin is objectively an abomination; that love trumps logic; that He is truthful in His Word; that He made the Heavens and the Earth; that faithfulness is both a gift and is rewarded; that if we trust Him, He will provide all of our needs; and that He does so even when we do not or cannot see.

Again, it’s an art film. Just because it’s “chock full of goodness” doesn’t mean you’ll like it. And, maybe it really is a Kabbalist  “Zohar mine” as Mattson claims. But if Aronofsky is speaking in code, whether to Gnostics or to space aliens, he has proven more clearly than Pharaoh or Nebuchadnezzar that his “heart is in the hand of the Lord; He turns it wherever He will.”

Editor’s Note:  Rod D. Martin, founder and CEO of The Martin Organization, is a technology entrepreneur, futurist, hedge fund manager, Christian author and university professor. Fox Business News calls him a “tech guru”, Britain’s Guardian labeled him a “philosopher-capitalist”, and Gawker called him a “brilliant nonconformist.” He was a senior member of PayPal’s pre-IPO startup team, served as Mike Huckabee’s policy director, was thrice elected President of the National Federation of Republican Assemblies (NFRA) and is a member of the Board of Governors of the Council for National Policy.