Parents’ Top Concern in Movies Has Not Changed 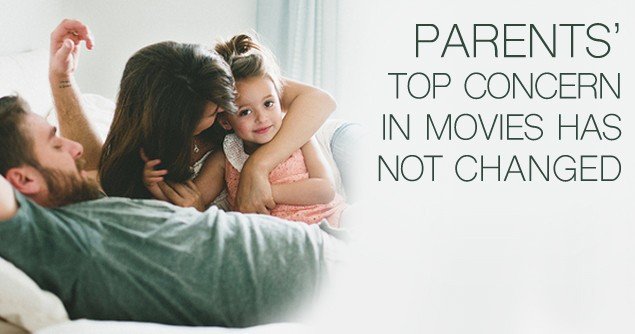 Parents’ Top Concern in Movies Has Not Changed

Parents are still most concerned with the sexual content in movies, according to the recently published 2015 Parents Ratings Advisory Study.

The study was commissioned by the Classification and Rating Administration (CARA), which runs the rating system used for most films. CARA is the cooperative result of the Motion Picture Association of America and the National Association of Theatre Owners.

Eighty percent of parents believe that the rating system is accurate, according to the study; however, 29 percent of parents reported that in the last 12 months they have seen a movie, which they believe did not have an appropriate rating.

CARA uses these surveys to determine if their ratings fall in line with the majority of parents’ feelings regarding movie content.

“The members of the rating board are tasked with rating a film the way a majority of American parents from across the country would rate it,” CARA Chairman Joan Graves wrote when announcing the study. “We provide information and guidance; we do not censor or give any kind of critical judgment on a film’s artistic quality.”

The majority of parents surveyed also responded that the F-word appears in PG-13 movies too much. “Only a quarter of parents say that PG-13 would be an appropriate rating for a movie containing the F-word,” according to the study.

The study showed that parents believe the ratings are most accurate in advising on violence, but also that they are most concerned about sexual content and nudity.

Five of the top six items listed as “[appearing] in PG-13 rated movies too much” were regarding sexual content and nudity, though use of the F-word ranked the highest.

In fact, only 26 percent of respondents said that a PG-13 rating would be appropriate for a movie that contained the F-word.

Additionally, the top three concerns regarding what content is “too prevalent in R-rate movies” were all types of sexual content, with use of the F-word following closely behind.

Graves commented on the purpose behind the ensuring that the ratings are accurate in reflecting parents’ concerns.

“It is a responsibility that we take very seriously, asking ourselves before every screening: ‘What would I want to know before letting my child watch this film?’ We are proud of the system that we have created, a system that families everywhere have come to rely upon,” Graves said. “Like any good system that is meant to endure, ours is one that evolves to reflect changes in social standards that happen over time. We will continue to seek feedback from America’s parents to ensure that we are meeting our purpose to inform parents and doing the best job that we can on their behalf.”