Behind the Scenes: Changing History with FREE BIRDS 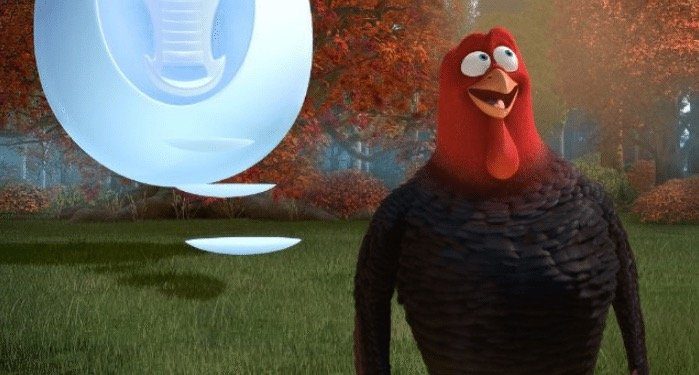 While FREE BIRDS does have a fun time looking at history through a different set of eyes, Movieguide® believes the movie could be confusing for children. What’s problematic with FREE BIRDS isn’t the fact that turkeys are time traveling to the past. What’s dangerous is when false ideas and perceptions of important historical events are implanted in a child’s mind. Almost no children will come away from this movie thinking that Turkeys went to battle with the Pilgrims, but some may come away believing the pilgrims were evil or stupid. At points, it also makes light of the starvation the Pilgrims were experiencing. Though the turkeys and Pilgrims work it out in the end, it teaches children to be sympathetic in the wrong direction.

Movieguide® recently had the opportunity to talk briefly with the director, Jimmy Hayward, about the movie.

We asked Mr. Hayward, who also co-wrote the screenplay, “When making a children’s movie that’s based around actual events, do you ever feel you have to balance between being both entertaining and educational?”

“With this picture,” he said, “we obviously led more with entertainment than anything. That’s why we put a funny disclaimer at the beginning with George Takei. We didn’t set out to make it super educational. That wasn’t the idea. Not that we were trying to teach kids the wrong things.

He added, “We felt a real responsibility to make an entertaining heartwarming picture with a good message. The message about the flock, togetherness, and [being] part of something bigger than yourself is probably the most education part about it. I think that’s an opportunity, rather than trying to teach kids about history and stuff like that. That’s what school is for. But, I think there is a real message in the movie that’s really important, that applies to all people.”

Though the filmmakers had some noble intentions and did include some positive messages, which can be read in Movieguide®’s review, we encourage families to enjoy movies that are both entertaining and educational.